Not many animals elicit the extreme emotional response that snakes do, but the truth is they’re an ordinary part of the landscape in Georgia.

They live in every corner of the state and serve an important purpose in the ecosystem, whether that ecosystem is a suburban backyard or an isolated pine forest. Without them, Georgia would have an overpopulation of rodents and other pests.

Snakes feed on a wide variety of small creatures. Some species feed only on warm-blooded animals such as rodents and birds, while others feed on toads, frogs and fish. Some smaller snakes feed on earthworms, slugs and soft-bodied insects.

Of the 40 kinds of snakes that call Georgia home, none of them have any interest in eating people. The state is home to six venomous snake species, which include copperheads and timber rattlesnakes.

All snakes, including venomous species, try to avoid their human neighbors at all costs and only resort to striking at or biting people when they feel cornered or startled. Snakebites are a rare occurrence, even as people move into snakes’ natural habitats.

If a venomous snake bites you or someone with you, there are basic steps you can take to reduce the severity of the snakebite.

If the snake is venomous:

As more people encroach on the native habitats of snakes, snake sightings are becoming more common.

Snakes may be seen more often on property surrounded by natural countryside or woods with rock piles, streams and wetlands. Landscaping that mimics nature, rock gardens, piles of debris and deteriorating outbuildings may harbor snakes as well.

No chemical controls can keep snakes at bay. The best way to reduce the chance of coming across a snake is to keep landscaped areas and structures unattractive to them. Keep these areas clean. Don’t allow areas around the house to become overgrown with vegetation or weeds.

Think like a snake. Look for sources of food and places to hide. Snakes can fit into very small spaces, so pay attention to details. If you lessen potential food sources, habitats and places to hide, you will more than likely reduce problems with snakes around the house.

(Snake facts borrowed from the Georgia Department of Natural Resources.) 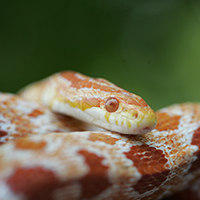 CAES News
Stay on schedule to maintain healthy turfgrass 07/23/20 Emily Cabrera
With the heat of summer bearing down on us, University of Georgia Cooperative Extension turfgrass specialists recommend that residents stick to a schedule for healthy lawn maintenance.

CAES News
UGA researchers discover genes that allow bacteria to resist onion’s natural defenses 07/16/20 Maria M. Lameiras
After years of building and analyzing sample collections, plant pathologists at the University of Georgia have identified the genes that allow a type of bacteria that causes onion center rot to resist onions’ natural defenses in a “chemical arms race.”
Subscribe for Updates