University of Georgia graduate student Zach Matteen is on a mission to convince more backyard gardeners and farmers to grow winter squash by determining the varieties best suited for the area.

By planting numerous winter squash varieties and monitoring them for diseases and pests, Matteen found that many varieties hold up to diseases and insects better than traditional summer squash.

“It’s difficult to grow squash in Georgia because of the long, brutal summers and the many pests and diseases there are to contend with,” said Matteen, who earned a bachelor’s degree in horticulture from the UGA College of Agricultural and Environmental Sciences in 2015. He is now working toward a master’s degree in plant pathology at UGA.

From 2015 to 2016, Matteen conducted trials for 11 varieties at UGA’s Durham Horticulture Farm in Watkinsville, Georgia, on land used to grow organic crops.

He also found that most C. moschata varieties have resistance to powdery mildew, and that the Seminole and tropical pumpkins offered the best resistance. Powdery mildew is a white, powdery substance that appears on older leaves and eventually spreads to all parts of the plant.

Some varieties offered excellent disease resistance but had other issues. The Choctaw sweet potato squash grew well overall, but Matteen faced a new problem when the fruit matured.

“The fruit grew really big — massive, in fact. I couldn’t even give them away,” he said.

Matteen also tried to determine squash bugs’ preferred varieties for feeding and reproducing. Squash bug adults suck the sap from the plant’s leaves, leaving them speckled before they wither and die. For eight weeks, he rated squash plants during each of the pest’s life stages.

“Adult squash bugs, overall, like to feed on all varieties equally,” he said. “They also did not show a strong preference as to where they like to lay eggs and where nymphs like to feed.”

Pickleworm, another squash pest, burrows into the fruit, making it unmarketable. Matteen found that ‘Waltham’ butternut and ‘Mrs. Amerson’s’ winter squash and the Seminole pumpkin x ‘Waltham’ butternut cross held up best against pickleworms. He attributes this to their thicker rinds and higher yields.

In this, his third, year of research, Matteen plans to add additional squash varieties to his trials at UGA.

“They grow better here because they have a thicker skin than the C. pepo varieties,” she said. “Seminole is very resistant to disease and it’s an interesting squash that the Seminole (Native Americans) grew. Butternut squash is very popular, but it’s also very susceptible to downy mildew." 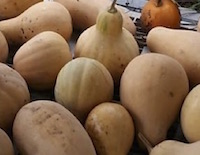