The University of Georgia Research Foundation (UGARF) has named Professor Peggy Ozias-Akins a Distinguished Research Professor, a title awarded to UGA faculty recognized internationally for their contributions to knowledge and whose work promises to foster continued creativity in their discipline.

In 2015, she was awarded a Creative Research Medal by UGARF and the D.W. Brooks Distinguished Professor Award by the UGA College of Agricultural and Environmental Sciences (CAES)

Ozias-Akins, a CAES professor of horticulture, applies advanced biotechnology and molecular biology tools — tools she developed herself in some cases — to improve crops like peanuts.

She is an expert on apomixis, the asexual production of seeds in plants. Even though it was studied for decades, there was little to show for these efforts until Ozias-Akins took a pioneering approach and applied a combination of forward genetics, genetic engineering and genomics to the problem. She was among the first to localize apomixis to a chromosomal region. She later found the first plant gene associated with it. Her work lays the foundation to begin research into the systematic application of apomixis in plant breeding, which could have an enormous impact on agriculture in both advanced and developing nations.

Working with the federally funded Peanut and Mycotoxin Innovation Lab project based at UGA, Ozias-Akins and her colleagues are seeking genetic markers that indicate resistance to aflatoxin, a cancer-causing chemical produced by molds that grow in soil, decaying vegetation. This could have a global impact on the peanut industry.

Ozias-Akins serves as director for the UGA Institute of Plant Breeding, Genetics and Genomics.

She and other institute faculty create new and improved plant varieties that are higher yielding, more disease resistant, more nutritious or have greater ornamental value.

She also co-chairs the Peanut Genome Sequencing Consortium, an extension of the International Peanut Genome Initiative. As an integral member of the initiative, she helped to sequence the commercial peanut, which will jumpstart breeders’ ability to identify genes or areas of genes with particular advantageous traits such as disease resistance or oil chemistry.

In her research program, Ozias-Akins studies crops that benefit the economy in Georgia and globally.

“The peanut is one of the crops I work on and it’s a fascinating crop. It flowers above ground while it fruits below,” she said. “There are a lot of challenges growing peanuts from both foliar and soilborne pathogens.”

In her research program at UGA, Ozias-Akins has helped to create peanut lines that are resistant to fungal contamination and produce fewer allergens. She has also introduced several genes into peanuts, including one that reduces the allergens in peanuts.

“Some of the proteins in peanuts can cause severe reactions in humans. We were able to knock down the production and, in some cases, almost eliminate those proteins,” she said. “Unfortunately, no companies want to push a genetically modified peanut because it takes a lot of money and years to get it through the system.”

Peanut and other crop yields have increased steadily through plant breeding. “(Breeding methods) really need to change with an expected 9 billion population. Scientists need to be able to use all the tools in our toolbox to keep those yield gains going up,” Ozias-Akins said. “Genomics is one of those tools. Globally, peanuts are an important oilseed crop in China, India and Africa. China is the top producer. In many developing countries, small peanut farmers are often women. It’s very important to improve the crop genetically.”

Over her more-than-30-year career at UGA, Ozias-Akins says it has been very rewarding to see classical and molecular breeders come together.

“We use molecular tools in our crop breeding programs and we pass this knowledge along by working with students,” she said. “Agriculture students are the scientists of the future and they need to know about both methods — classical and molecular breeding — in order to be successful.”

A native of Tifton, Georgia, her interest in science goes as far back as third grade, when she entered a science fair with a project on trees. She went on to win first-place ribbons in numerous science fairs throughout her formative years, including a first-place award for a project on bacteria on plants.

Ozias-Akins left south Georgia to earn an undergraduate degrees in biology and botany from Florida State University (FSU) and a doctorate in botany from the University of Florida (UF). She returned to Georgia in 1986 to join the UGA faculty at UGA-Tifton. She credits her mentors, UF scientist Norris Williams and FSU researcher Margaret Menzel, for encouraging her interest in genetics. 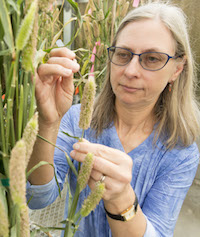