Lenny Wells, University of Georgia Cooperative Extension pecan specialist and the university’s leading voice in the pecan industry, covers the history of pecans and their popularity in the South in his first book, “Pecan: America’s Native Nut Tree.”

In the book, Wells addresses the pecan’s progression from wild tree to the $361 million crop it is today in Georgia. The book also covers the industry’s rise from the forests of the Mississippi River valley throughout the United States.

“What really led to this book is the people I met through this job, even those who I hadn’t really had an opportunity to meet, but have read about,” said Wells, who joined UGA Extension in 2002 as an Agriculture and Natural Resources agent in Dougherty County. In 2004, Wells served as part-time agent and part-time pecan specialist. In 2006, he became the full-time pecan Extension specialist. “Previous researchers, Extension specialists and certainly the growers have contributed a lot to the story of the pecan and its progression into the crop business today.”

When Wells started his job at UGA, he found a box of old magazines, articles and pamphlets from the early 1900s in his office. These texts, left by his predecessor, Tom Crocker, included an interesting story about the location of pecans’ beginnings as an agricultural crop.

Wells said his book is not just for pecan growers. It’s for anyone interested in Southern agriculture.

The book includes recently discovered data on the health advantages of pecans, like the nut’s high level of antioxidants and its heart health benefits.

“I think the message about how healthy pecans are has not gotten out as much as the industry would like,” Wells said. “I hope this book can help get that message out to the masses.”

The book also covers the development of different pecan varieties and the nut’s surge in popularity around the world. It took many years for people to realize that 1,000 seeds from the same pecan tree can produce 1,000 unique trees, Wells said.

“It’s kind of like people. You can have the same parents, but each kid is a little different,” Wells said. “It’s the same concept with pecan trees and the different varieties you can produce.”

Pecans’ popularity soared when China’s demand for the nut increased and pecan trees were grown around the world. Wells estimates that pecan production in Georgia has increased by at least 25,000 acres over the past five to 10 years.

Pecans accounted for more than $361.3 million in Georgia farm gate value in 2015. The nut is grown on more than 165,000 acres in the state, according to UGA Center for Agribusiness and Economic Development’s 2015 farm gate value report.

Wells’ book, “Pecan: America’s Native Nut Tree,” is available through The University of Alabama Press for $29.95. To order the book, visit www.uapress.ua.edu/product/Pecan,6552.aspx or www.amazon.com. 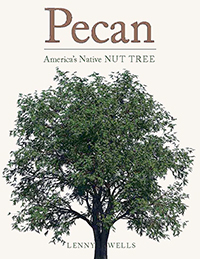