A University of Georgia student’s survey of the cotton industry found that the crop, once “king” in Georgia, can compete with synthetic fibers and will continue to be economically and environmentally feasible into the future.

For her master’s degree thesis, Shannon Parrish, a former graduate student at the UGA Tifton campus, set out to gauge the status of cotton production today and whether growers can improve the crop and minimize its impact on the environment. She set out to study how the Georgia cotton crop compares to the crop nationwide.

“Cotton is a major commodity crop in the U.S.,” said Parrish, who studied under George Vellidis, a professor in the crop and soil sciences department in UGA’s College of Agricultural and Environmental Sciences. “I don’t really ever see cotton not being grown here.”

The research study was prompted by global consumer concern over cotton’s environmental sustainability, according to Don Shurley, UGA Cooperative Extension cotton economist, who also worked with Parrish on the project.

“Over the past 10 years or more, we’ve lost market share in cotton to man-made fibers,” Shurley said. “Some people believe that loss in market share is, in part, due to the fact that there are consumers out there who think cotton production is not environmentally friendly.”

With funding from the Georgia Cotton Commission, Parrish met with cotton producers across the state and gathered information about their management practices. She calculated data in the Field to Market Fieldprint Calculator when she had all the information for a specific cotton field.

The Fieldprint Calculator assigns a sustainability rating for a specific field based on seven different metrics. Everything is based on a scale from 0 to 100, where 0 is the most sustainable, and 100 is the least sustainable. Once she had the sustainability ratings, she compared them to the national and state benchmarks that are in the calculator. Based on the results obtained from this research, Georgia cotton can be determined less resource intensive than the national benchmarks.

“You consider all the elements that make up cotton farming: a producer’s land use; their energy use; their greenhouse gas emissions; if they’re irrigating; their water use; their water quality; soil conservation; soil carbon. That’s essentially what the calculator looks at,” Parrish said.

The second part of her research was to fit producer management practices to the university's cotton production budget, changing only what the producer told her they were doing in the field. For example, Parrish learned of the farmers’ pesticide sprays and fertilizer applications and changed those elements in the budget to determine if a relationship existed between profitability and the field print metric scores. She also explored the impact of tillage methods, variable costs, and fixed costs on profit.

Cotton production in the United States has dropped in recent years. Cotton was planted on 8.56 million U.S. acres in 2015, down 22.5 percent from 2014 and the lowest level in 33 years, according to the UGA Extension 2016 Georgia Cotton Production Guide.

UGA Extension also reported Georgia’s cotton acreage dropped 19 percent in 2015. Georgia cotton was worth $713.1 million in farm gate value in 2015, according to the UGA Center for Agribusiness and Economic Development. 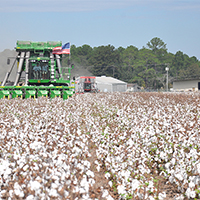