February wrapped up an abnormally warm winter in Georgia, with average temperatures ranging from 6 to 9 degrees above normal throughout the state.

This is the 13th month in a row that Georgia has experienced warmer-than-normal temperatures. Rainfall across the state was well below normal, which combined with warm weather to have different effects on crops across the state.

This winter’s warm weather led to a shortage in chill hours for fruit crops, and early flowering. Both situations could negatively impact fruit yields by reducing overall fruit set and putting existing fruit at risk for damage by frost.

Conversely the warm weather led the Georgia Department of Agriculture to designate an earlier packing date for Vidalia onions. The onions, which are scheduled to be released April 12, appear to be in good condition with minimal disease pressure.

Pastures and small grains in southern Georgia were progressing well, but were stalled in north Georgia due to the continuing drought there.

There was one daily rainfall record this month. Savannah recorded 2.08 inches of precipitation Feb. 22, surpassing the old record of 1.45 inches set in 1998.

It was the seventh driest February for Athens based on 161 years of record. The last time it was this dry in February was 1978, with just 0.75 of an inch of precipitation.

The highest daily rainfall total recorded by a Community Collaborative Rain, Hail and Snow Network volunteer was 3.15 inches west of Albany in Dougherty County on Feb. 8, followed by 2.22 inches measured at Fort Gaines in Clay County on Feb. 22. For the entire month, the highest total precipitation was 4.72 inches measured east of LaGrange in Troup County, followed by 4.57 inches from the Fort Gaines observer and 4.55 inches from the Albany observer. A few snow flurries were reported in the northeast mountains on Feb. 9.

Two rounds of severe weather impacted Georgia in February. Tornadoes were reported in Harris, Bulloch and Effingham counties during Feb. 7-8. One of the tornadoes in Bulloch County resulted in five injuries from an EF-2 tornado, but most of the damage came from fallen trees. Isolated wind damage occurred on Feb. 23 and 24. Producers were continuing to clean up damage from the severe storms in January, which damaged pecan trees, fences and irrigation equipment.

For more information, visit the Climate and Agriculture in the South East blog at blog.extension.uga.edu/climate or visit www.gaclimate.org. Email your weather and climate impacts on agriculture to share on the blog to pknox@uga.edu. 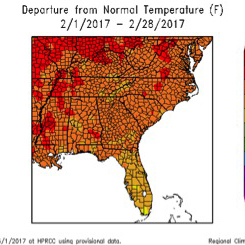