Cages are best for armadillo control

As the armadillo spreads farther north, the common question becomes, “How do I control these animals?” Armadillos feed primarily on invertebrates under the soil surface and the rooting action that takes place while they forage often damages lawns and landscapes.

Shallow holes 1 to 3 inches deep and 3 to 5 inches wide, usually shaped like an inverted cone, are the most common landowner complaint. Armadillo foraging can also uproot flowers and other plantings. Furthermore, burrowing can cause structural damage to buildings or kill ornamental plants or trees.

How do you get rid of these animals? Oftentimes suburban landowners would rather have animals trapped and relocated; however, it is never a good idea to trap and relocate an animal due to its low probability of survival in a new environment and the stress caused to other animals in the area of release.

University of Georgia Cooperative Extension wildlife experts recommend following the H.E.R.L. model for wildlife damage management. This step-by-step method starts with ‘H’ for habitat modification or harassment; ‘E’ for exclusion; ‘R’ for repellent or removal; and ‘L’ for lethal control. Habitat modification or harassment and exclusion are the first two choices; however, these methods are often impractical, expensive or ineffective for armadillos.

Currently there are no registered repellants for use against armadillos. That leaves us with lethal control. Georgia wildlife regulations do not protect armadillos, so they may be hunted or trapped year-round without limit. While shooting can be an effective control method, it may not be safe or desirable for suburban landowners. If this is the case, trapping should be used as the control method.

A UGA study revealed that baiting traps was virtually a waste of time and money. Eleven baits were tested and all revealed a low capture rate. At first glance these results seem discouraging. Trapping is still a viable option for control, but baiting is less important than trap placement.

The most effective method for capturing individual animals is to place cage traps with guides toward the door near an active burrow. Traps placed near natural barriers or fences, such as the walls of patios, edges of buildings or landscaping features, will also have greater success.

Wire cage live traps measuring at least 10-by-12-by-32 inches are recommended for capturing armadillos. Wings should be constructed of 1-by-6-inch lumber in various lengths and placed in a ‘V’ arrangement in front of the trap. These wings help “funnel” the armadillo into the trap. Random placement of traps yields low success.

As is the case when trapping any animal, scouting is paramount. Determine where the damage is occurring and trace it back to an active burrow. If no burrow can be found or it is located on another property, place the trap along the travel corridor. Armadillos often travel along barriers, natural or manmade, so placing a trap along the edges of these barriers can increase success.

Armadillo tracks usually appear to be three-toed and show sharp claw marks in the back with two or four claw marks in the front, depending on soil moisture. There is often a distinct drag mark from the tail along the path of travel. 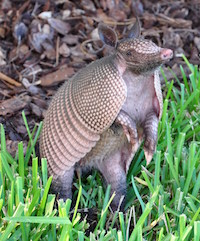