Landscapers can soon add a bit of Georgia’s historical Piedmont and native prairies to their designs thanks to the creation of three new little bluestem perennial grasses, released through a University of Georgia and U.S. Department of Agriculture (USDA) partnership.

Little bluestem grasses are native to North America and are a major component of the tallgrass prairie. They typically produce green to blue-green foliage. With names that conjure up thoughts of the ‘70s, the new little bluestem varieties are much more colorful than their traditional parents. ‘Cinnamon Girl’ has a red-burgundy glow, ‘Seasons in the Sun’ has a lavender glow and ‘Good Vibrations’ is a mix of colors: red-purple with green-yellow foliage.

The idea to breed the colorful grasses came from USDA scientist Melanie Harrison. Harrison curates more than 500 different species of grasses and safely cold stores them in the USDA Plant Genetic Resources Conservation Unit facility on the UGA campus in Griffin, Georgia. Most of these grasses will never be grown in home landscapes, but their genes may be used to breed specific characteristics into new grass varieties.

“My job is to conserve close to 500 different species of grasses, so there’s a lot of variety,” she said. “I thought they were pretty, but I’m not a plant breeder, so I asked Carol (Robacker) what she thought.”

Carol Robacker, a UGA College of Agricultural and Environmental Sciences horticulturist, is Harrison’s colleague on the UGA Griffin campus. She was also Harrison’s major professor when Harrison was earning her doctoral degree in the college’s horticulture department.

Their 2006 conversation about the little bluestems led to a research partnership that, 10 years later, resulted in the three new varieties of these grasses.

Having bred numerous abelia and vitex varieties, Robacker knows that home gardeners and professional landscapers like to have a variety of plants to choose from, but they don’t always know how to use them.

“Little bluestem is growing in popularity, but people don’t know where to plant it,” she said. “It does well in mass plantings mixed with other plants. And it’s very attractive when the wind blows.”

Little bluestems are low maintenance, and the new varieties are bred specifically for Georgia. The grasses retain their color in hot, Georgia summers and go dormant in the winter. And, Robacker said, the color is “more intense in areas of north Georgia, like Blairsville.” After dieback, the grasses should be cut back in early spring.

“They are at their peak in May, June and July, and then they provide some pretty fall color,” Robacker said.

“Planted en masse, bluestems are very peaceful and they make great habitats for wildlife,” Harrison said. “Birds use them for nesting and protection. They also provide nutritious seeds for the birds.”

Patents have been applied for, and the research team now seeks someone to license the new varieties. 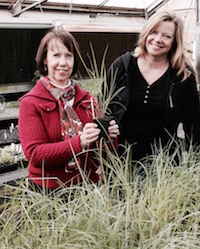