Hundreds of homes were damaged, dozens were injured and 17 Georgians were killed in two separate outbreaks, one on Jan. 2 and one from Jan. 21 to 23.

While tornados can happen at any time of the year, the abnormally warm weather Georgia experience this January – between 3 and 10 degrees warmer than normal – likely helped to fuel the deadly outbreak.

The first round, on Jan. 2, brought high winds and a number of tornadoes to southwest Georgia, although power outages and flash flooding were seen as far north as Atlanta. The second round, from Jan. 21 to Jan. 23, brought 73 confirmed tornadoes to the Southeast and an estimated 40 to the southern half of Georgia.

While southern Georgia works to rebuild after the storms, the rest of Georgia is making sense of our warm winter weather. Georgia’s average temperature was between three and 10 degrees above normal during January, and February is projected to be warmer than normal as well.

Spring-like temperatures in the middle of January caused premature blossoms to emerge on some fruit trees, which may expose spring and summer fruit harvests to frost damage.

Data from around the state show that the January average temperature was in the top 10 on record.

In addition to warmer-than-average temperatures, January was also wetter than normal, eliminating drought conditions from much of the state. By the end of the month, the area of extreme drought was reduced from 20 percent to less than 4 percent of the area and was confined to northeast Georgia. The entire state below the fall line from Columbus to Macon to Augusta was completely free of dry conditions by late January.

Some farmers found their fields too wet to work as they started to prepare their land for spring planting.

The highest daily rainfall total recorded by Community Collaborative Rain, Hail and Snow Network observers was 6.23 inches west of Albany in Dougherty County, Georgia, on Jan. 22, followed by 5.43 inches measured at another Albany station just over the border in Lee County, Georgia, on the same morning. The first Albany observer also recorded the highest monthly rainfall total: 17.44 inches reported. It was followed by 13.90 inches measured at Fort Gaines, Georgia, in Clay County followed by 13.31 inches from the Lee County observer.

The highest daily snowfall recorded was 6.6 inches, near Hiawassee, Georgia, in Towns County and 6.5 inches reported near Dillard, Georgia, in Rabun County on Jan. 7. These two stations also had the highest monthly snow totals, with 6.9 and 6.8 inches, respectively.

For more information, please see the “Climate and Agriculture in the South East” blog at blog.extension.uga.edu/climate/ or visit our webpage at www.gaclimate.org. Please feel free to email pknox@uga.edu with your weather and climate impacts on agriculture to share on the blog. 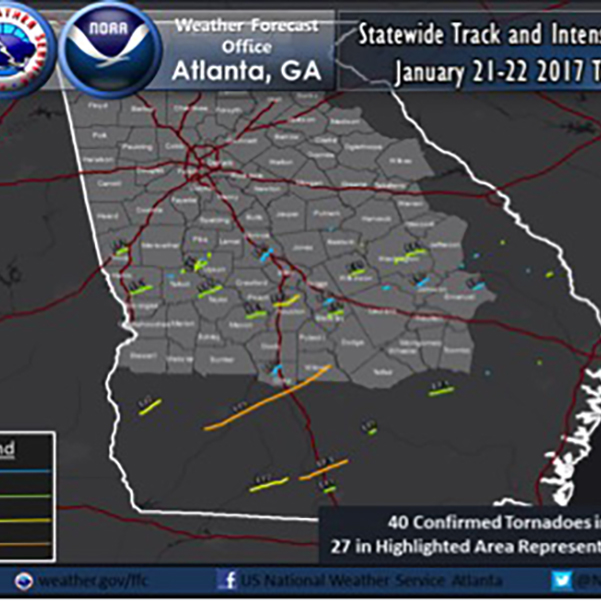