How did you decide on this program?

Last spring, I was going to be part of a UGA-sponsored program in Verona for three months. I contacted Amanda Stephens (CAES Associate Director of Student Engagement) about adding on the certificate internship. Amanda was able to work with the UGA veterinary school to secure a veterinary internship at the University of Perugia.

What was it like settling in after your arrival?

After a grand tour of the vet school by the director, I attempted to blend in with the vet students. During the first couple of weeks, I walked around to the different sections of the hospital. I quickly figured out that most of the action happened in the equine department. Since I already had experience in small animal surgery, I was excited to gain experience in large animal and joined the equine department!

What activities did you engage in while in the equine department?

The director of equine surgery realized that I was “the American,” so he gave me their uniform green scrubs and he and the other doctors basically took me under their wing. I was able to scrub in for surgeries every day, and I learned that there is a huge difference in small and large animal surgical procedures. Putting horses down for surgery is a much more stressful process than putting a dog or cat down, for instance. Surgeries are my favorite, so I loved being able to compare these surgeries to small animal surgeries I had seen before.

Was there any particular case that sticks with you?

One of my favorite cases was an ataxic foal that came to stay for a couple weeks. He was having seizures 24/7, so someone had to hold him and keep him from hurting himself at all times. He was on oxygen and had to be lifted up every thirty minutes. When the vet students needed a break, they let me take their job of sitting on the stall floor and gently holding him still. Once he became a bit healthier, he started nursing from his mother. The problem was that his mother didn’t “accept” him due to his health issues, so she would constantly try to kick and bite him while he was nursing. After I had proved my skill of holding him, they let me take him to his mother and help him nurse from her, whilst simultaneously trying to avoid kicks from her! It was a fascinating case, and he was pretty cute, too.

How about life in Perugia? Were you able to get to meet a lot of new people?

My favorite part of Perugia was how easily I could walk to town. I couldn’t help thinking that maybe if America was as pedestrian friendly as Europe, we would have a much more active society. My fitbit never had less than 20,000 steps every single day! I also made friends from different countries including Spain, Portugal and Russia. I met a Spanish girl my first week in Perugia who insisted that I “take an aperitivo” with her and a friend. Aperitivo is when you buy a drink and then get a buffet of appetizer foods; it became my new favorite tradition. It was great making these new friends because I was able to experience Italian culture from American and Spanish perspectives at the same time. I also enjoyed having dinner in Perugia because it involved sitting around and talking and sharing our day while we ate.

How did this internship abroad affect your view of the world?

The constant interactions with people from other countries helped me become more open to discussing uncomfortable subjects and different opinions. My Perugia friends were some of the friendliest people I have ever known, I only hope that I can return the favor and be so inviting to those visiting UGA, Georgia, and the states.

Do you have any words for students considering the International Agriculture Certificate Program?

Take the leap of faith. There are people willing to help you find the right program and a great number of scholarship opportunities. Before my trip I was focused on getting into vet schools in Georgia, but this experience has opened my mind to possibly looking at applying to veterinary schools outside of Georgia and even in Europe. I’m so grateful to have been able to have this experience of a lifetime! 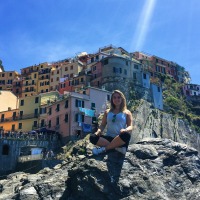