The lucky legume has been part of a boom-and-bust cycle for the past three decades thanks to a pod-feeding weevil that has, so far, evaded farmers’ best pest control practices. This year is going to be a bust due to high pest pressure, said David Riley, a professor of entomology at the University of Georgia who works with vegetable pests.

Earlier this month, scientists from across the United States and farmers from across the Southeast gathered in Savannah, Georgia, for the Southern Pea Workshop, part of the annual Southeast Regional Fruit and Vegetable Conference. Their goal was to develop strategies for controlling the cowpea curculio, a relative of the boll weevil that has a taste for peas.

“The crop is really under severe pest pressure,” Riley said. “It’s not a new problem, but it’s one that reoccurs every few years … Some years the crop is good, but the reason this has reached a critical point this year is because the last few available insecticides that we were using to control this pest have stopped working.”

The pest pressure was so bad last year that the largest pea grower in Georgia’s largest pea-growing county, Colquitt County, sold his pea-shelling equipment at the end of the season, said Jenna Brock, a UGA Cooperative Extension agent in Colquitt County. He won’t grow peas anymore, she said.

“They were our main pea grower, with hundreds of acres, and he’s just gotten out of it,” Brock said. “He still grows other vegetables – spinach and some corn – but peas that were packaged and sold frozen in the grocery store have been a big part of his business.”

Colquitt County went from growing almost 1,800 acres of Southern peas in 2015 to less than 500 acres in 2016, Brock said. She doesn't expect many farmers to increase their acreage in the 2017 season.

“If we can’t solve this problem, Southern peas will never come back to Georgia in a big way,” Riley said.

At the turn of the 20th century, Southern peas – the family of legumes including black-eyed peas, purple-hulled peas and crowder peas – covered close to 6 million acres across the Southeast. They were the primary legume, grown for livestock feed until World War II, when the soybean took over its spot in fields.

Drought-tolerant, disease-resistant and able to fix its own nitrogen in the soil, the crop was a powerhouse in the Deep South.

“One hundred years ago, it was a crop of national importance because of its use as traditional Southern food and as animal forage and feed,” Riley said. “Then, after the emergence of soybeans, all the cowpeas that were used for livestock production disappeared, and then all that was left was the peas grown for food.”

What was left in the Southeast was the close to 30,000 acres of cowpeas that make their way to our local supermarkets each year.

Southern peas started facing pressure from the cowpea curculio in Georgia in 1873, and by the 1910s, it was widespread throughout the South. By the 1980s, pyrethroid insecticides were the most effective control, but since then, even that group of insecticides has not been enough to control the pest. Populations of the cowpea curculio overwinter readily, and after a few years of building up populations, become unmanageable. When farmers stop planting Southern peas in the region for a few years, the curculio population can drop. Then farmers start growing Southern peas again, and the cycle reboots.

Riley took his post as a vegetable entomologist with UGA in 1996, and in 1997, the large black-eyed pea marketers pulled out of Georgia because of curculio problems. Georgia black-eyed peas were just too riddled with damage to meet consumer demand. The acreage of black-eyed peas in Georgia plummeted, and with it, so did cowpea curculio populations.

With fewer curculio problems, acreage began to rebound, peaking in 2015 at about 7,600 acres, according to UGA’s 2015 Farm Gate Value Report, published in 2016.

As the acreage peaked, so did curculio problems, Riley said.

UGA vegetable horticulturists and entomologists have robust pest-control research programs for most of Georgia’s larger vegetable crops. Peppers, onions and watermelons are covered by a selection of insecticides and an array of growing practices that have been shown to control pest populations.

But those integrated pest management programs have been developed through years of research, and that research costs money, money that often isn’t abundant for small-acreage crops like black-eyed peas.

Solutions to the problem

Over the course of this year’s Southern Pea Workshop, researchers compared notes on the grower-funded research projects they’ve been working on across the South, shared news about breeding programs that could make peas resistant to the weevils and put together the crop profiles and strategic plans needed to seek research funding from the U.S. Department of Agriculture’s specialty crop program.

Riley believes that the solution to the pea problem will involve developing a trap crop that can be planted in the spring to trick the curculios into laying their eggs early and in the wrong crop. There are also efforts underway to breed weevil-resistant Southern peas.

Hundreds of heirloom and landrace varieties could be bred with classic black-eyed peas to develop weevil resistance. There may also be options to genetically modify peas.

California is currently the largest producer of black-eyed peas in the United States.

“If you don’t have the curculio, it becomes one of the easiest, cheapest crops to grow,” Riley said. “It naturally fixes its own nitrogen in the soil, and most of the disease and other insect problems are easily manageable. They’re the most drought-tolerant legume you can grow.

“It’s got all of the pluses and this one big minus. If we would just take care of this curculio, we could have large acreage again because it is truly a very utilitarian crop.”

For more on the integrated pest management solutions developed by UGA College of Agricultural and Environmental Sciences researchers visit ipm.caes.uga.edu. 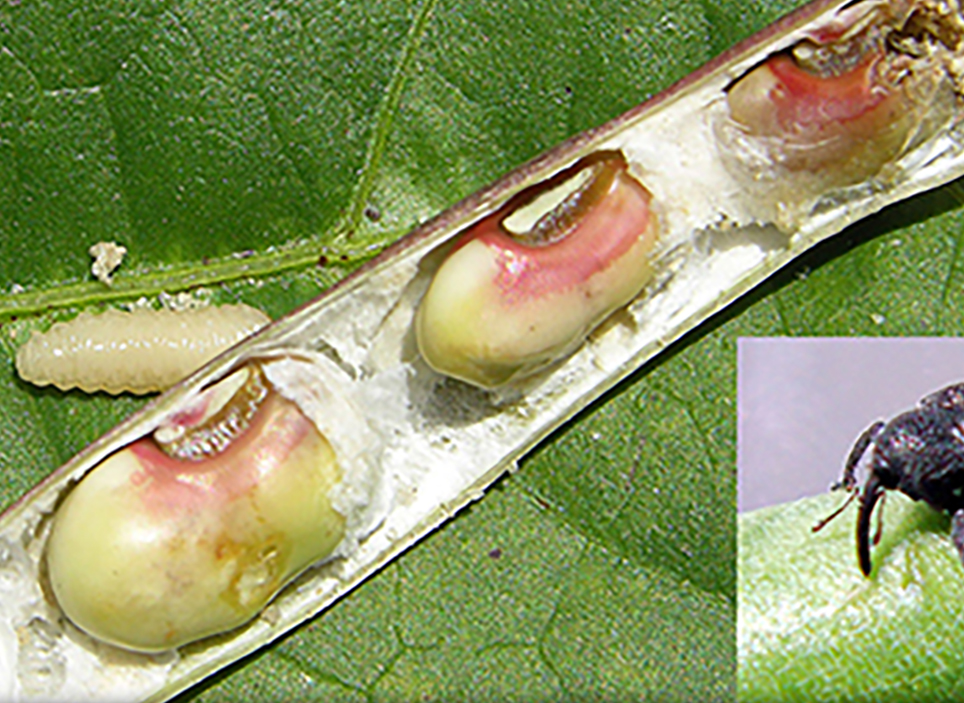 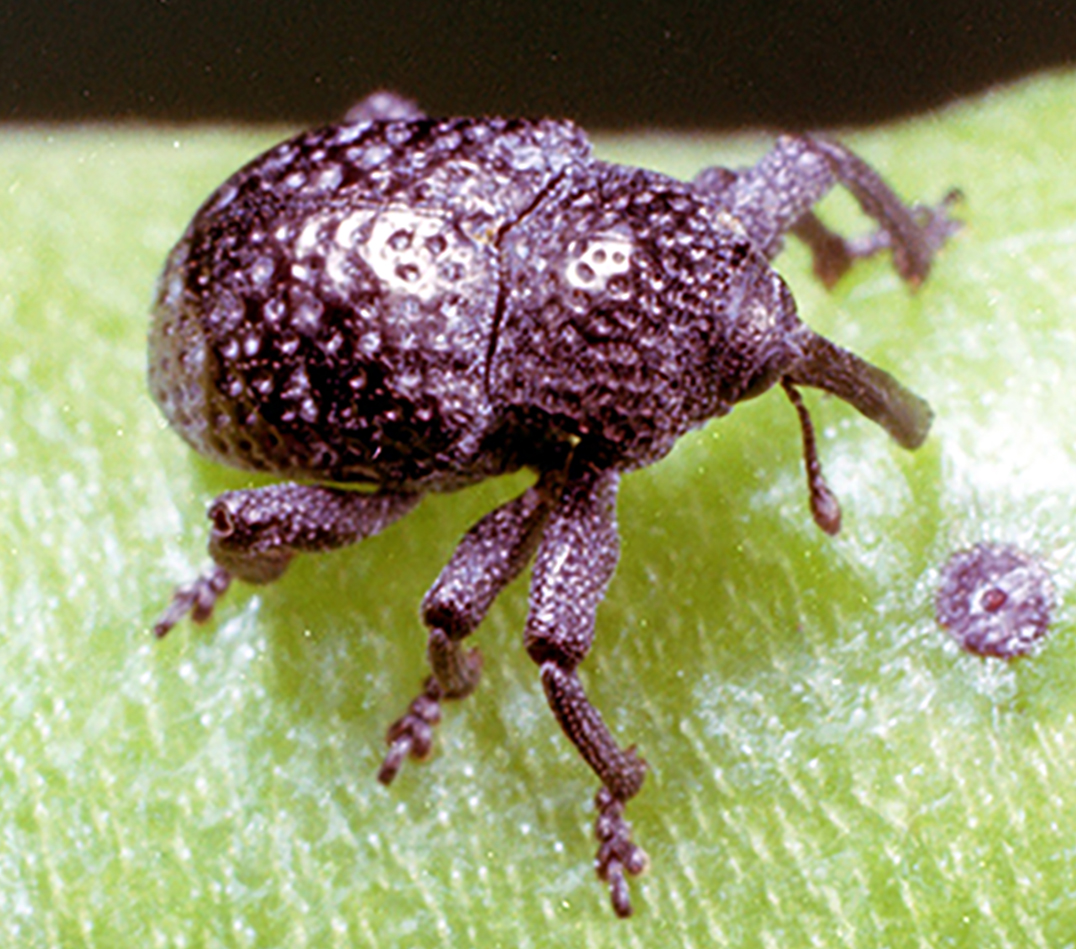 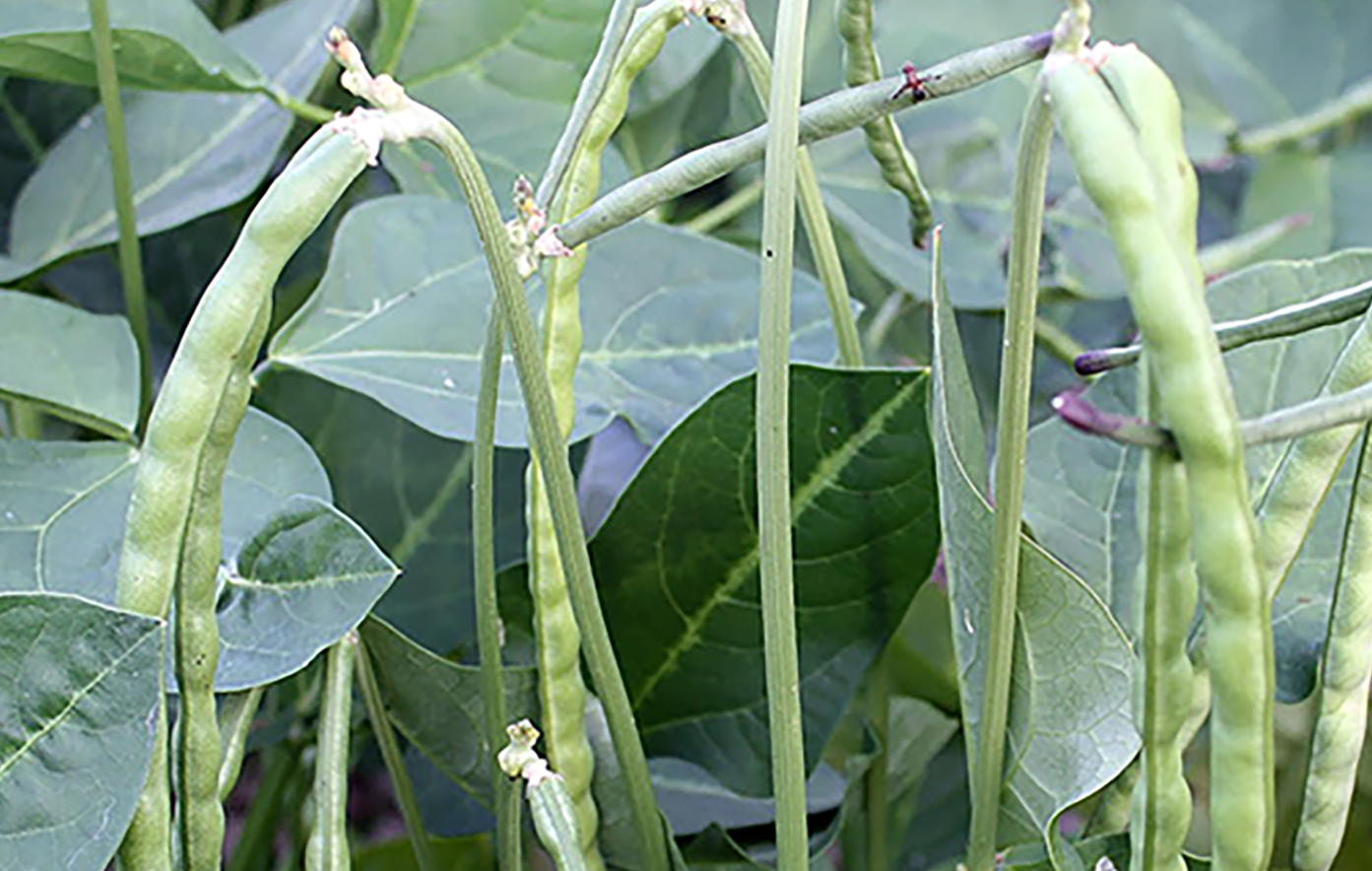