Remote moisture sensors and smart irrigation rigs are promising to revolutionize the way farmers use water, but soon this same technology may be available to landscape managers and, eventually, homeowners.

University of Georgia horticulture student Jesse Lafian has received a $5,000 grant from the UGA Office of Sustainability to develop a solar-powered, automated irrigation controller. The novel system will be tested at the UGArden student-run vegetable farm and at the crescent-shaped flower bed by the Miller Plant Sciences Building on the university’s Athens campus. Lafian received the grant earlier this month.

The technology is being tested as part of Lafian’s startup, Reservoir LLC, a business he launched in early 2016 and plans to grow after his graduation in May 2017.

“I have been working on conservation-related projects since graduating from high school,” said Lafian, a fourth-year student from upstate New York studying at the UGA College of Agricultural and Environmental Sciences. “When I started this project, I wanted to create an accurate and affordable way for researchers to measure plant-available water in soil. Fortunately, it has evolved into an opportunity to reduce irrigation and expenses for many different customers.”

Lafian moved to Athens to work as a research assistant in the UGA College of Engineering in 2014 after receiving his associate’s degree from Tompkins Cortland Community College in Dryden, New York, and completing a National Science Foundation-funded oceanography internship. He began completing his bachelor’s degree in fall 2015.

Lafian has applied for a patent on his sensor, which measures soil moisture in a novel way. He plans to sell his technology initially to managers of high-end landscaping companies, and then to other types of customers, such as farmers, golf course superintendents and homeowners.

“Jesse’s system works fundamentally differently from the sensors I have used in the past,” said Marc van Iersel, a professor of horticulture at UGA, smart-irrigation pioneer and Lafian’s adviser. “The soil moisture sensors I have been using measure how much water is in the soil, but not how tightly that water is held in the soil. Some – or much, depending on soil type – of the water in the soil cannot be extracted by plants because the soil holds it too tightly. Jesse’s sensor measures exactly that: how tightly the water is bound to the soil. That tells us whether the plants can actually use that water.”

Lafian’s sensor will be able to control irrigation automatically based on plant-water availability, meaning sprinklers will only engage when plants have restricted access to water and will only run as long as it takes to restore adequate moisture. Today, most automated irrigation systems are controlled by timers, regardless of soil moisture conditions.

Lafian’s invention is a particular kind of soil moisture sensor called a “tensiometer.” Conventional tensiometers can be used to control irrigation systems, but they require constant supervision, making them unsuited for large-scale commercial applications. Lafian’s tensiometer doesn’t require nearly as much upkeep.

“What makes my device different is that it is maintenance-free,” Lafian said. “Regular tensiometers are mostly used in laboratory settings. They are impractical for large-scale field use because they must be monitored every few days to make sure they are still working correctly. If a landscape manager had 100 regular tensiometers on 100 different properties, it would be impractical to check them all every few days.”

Lafian developed his idea for the tensiometer in fall 2015 while taking a “Soils and Hydrology” class as part of his horticulture degree coursework. In spring 2016 he turned his idea into a business, and in the fall he participated in the Idea Accelerator program run by Thinc. UGA and Four Athens, a local technology incubator. This eight-week entrepreneurship program helped Lafian identify the initial target market for his sensor.

“I knew my tensiometer would be useful from the start, but I was not sure exactly who would benefit the most from it,” Lafian said. “During the accelerator program, I conducted 45 interviews with potential customers, and I got the best response from managers of high-end landscaping companies.”

Several managers at leading landscaping companies nationwide have already asked if they can test his prototype when it is ready. Lafian is using the grants he secured this year to develop and test the technology so that field trials can begin.

Lafian has previously raised grant money for this project – $2,000 from UGA’s Center for Undergraduate Research Opportunities (CURO) and $1,500 from the CAES FABricate entrepreneurship program. That money has gone into testing various materials for the sensor.

This new grant from the Office of Sustainability will allow Lafian to hire UGA students in computer science and engineering to help fine-tune the device’s electronics and user interface – a cell phone app that will allow customers to view soil moisture data remotely. It will also fund the production of several prototypes, which will be tested at the UGArden and in the Carlton Street flower bed.

For more information about smart irrigation research at the UGA College of Agricultural and Environmental Sciences, visit caes.uga.edu. 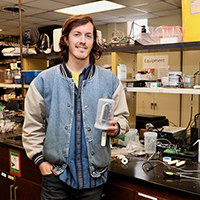