Sausage is traditionally made from pork, but a University of Georgia research team recently developed a breakfast link-style sausage made from lean quail meat.

The new product was created in response to a need in the Georgia food industry. “About two years ago, we were approached by a quail meat processor for help in creating a product from quality quail breast meat trimmings,” said Anand Mohan, a food scientist in the Department of Food Science and Technology in the UGA College of Agricultural and Environmental Sciences. “A lot of (quail) breast meat trimmings go to waste, and they don’t know how to use it.”

Mohan turned the request into a project for then-CAES undergraduate student Carla Reed, who was eager to accept the product development challenge. A graduate of Le Cordon Bleu College of Culinary Arts in Tucker, Georgia, Reed made the decision to return to college after working in the food industry for a few months.

“I wanted to open my own restaurant, so I returned to school and UGA has the only food science program in Georgia,” she said. “I wanted to learn the science behind the food and I definitely got to do that through projects like this quail sausage.”

In the past, meat processors attempted adding pork and beef fat to ground quail meat, but the resulting sausage “just didn’t taste good,” Mohan said. The UGA team’s challenge was to use quail meat trimmings, without adding another meat source, to create a product that tastes good and is accepted by consumers.

After six months of trial and error and a number of different recipes, Reed created a maple-flavored quail link sausage developed specifically to appeal to children.

“I had never even tried chicken sausage when we began working on the quail sausage project,” she said. “But I do remember loving maple-flavored pork sausage when I was a child.”

Quail meat is naturally lean, so the UGA group fortified it with plant protein. The protein flour also increased the sausage’s fiber content. “We wanted to make the sausage more juicy and tasty, as well as packed with extra nutrition for children,” Mohan said. “It has almost 21 percent protein, 0.5 percent fiber, too, and it has a lot of minerals in it.”

Most sausage products are high in fat, but quail meat does not contain lot of fat, he said. “You cannot develop a sausage without fat. However, we were able to develop a tasty product that does not have any added animal fat,” he said.

With just 3 percent fat, the quail sausage is leaner than most sausages on the market, but Mohan says that the UGA-created quail sausage recipe still tastes amazingly like pork sausage. “I think it tastes more similar to pork. It doesn’t taste like chicken sausage at all,” he said.

The quail sausage links created at UGA are recommended for children as well as adults in U.S. markets. The small size of the link and the maple flavoring led the team to make a connection to the children’s market.

“In the end, we were able to produce a maple-flavored sausage that was rated as good as a standard sausage by the UGA students and workers we used as a taste panel,” Mohan said. “And we compared our quality sausage to one of the best chicken sausage products produced in the market.”

The second phase of the quail sausage study will determine if the product would be accepted in the marketplace.

Reed, now a food technologist at Albertville Quality Foods in Albertville, Alabama, hopes the quail sausage product makes it into grocery stores and eventually lands on consumers’ tables, but she knows the odds are against it.

“I’ve worked on several projects that have been approved and commercialized, but the fact is that less than half of new products launched are successful,” she said. “It’s a good product for parents who are health conscious. It is a lower-fat alternative to high-fat sausage patties and links, and it would be perfect for those who are allergic to soy protein.” 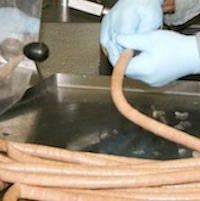