For millennia, farmers used compost to return nutrients to depleted soil. Now researchers are searching for a way composting can help battle aflatoxin.

Ghana native Esther Yeboah Akoto, who is currently pursuing her master’s degree in food science and technology at the University of Georgia, is working to help farmers diminish aflatoxin contamination in their soil by composting field waste.

“We know that composting has been around for a very long time. It’s a technique that growers have used for thousands of years,” said Akoto, who is conducting her research in conjunction with U.S. Feed the Future's Peanut Mycotoxin and Innovation Lab at the UGA College of Agricultural and Environmental Sciences.

“More recently, we know about aflatoxin and its effect on health. Could composting provide a way to remove aflatoxin-contaminated produce from the food supply?”

Researchers around the world are working to minimize naturally occurring molds that can grow on peanuts, maize and other crops. Those molds diminish the quality of peanut crops and generate mycotoxins such as aflatoxin, a dangerous compound that can cause physical and mental stunting in children, cause cancer and, in high doses, even kill. Obviously, the most effective intervention is to minimize mold growth in the field and in storage, but farmers may never completely get rid of something as ubiquitous as mold.

For farmers and producers, particularly those in food-insecure areas, finding a use for crop waste and contaminated food is vital — no one wants to waste part of the crop. In the case of peanuts, Akoto found that many farmers in her home country of Ghana would simply put crop waste back into the ground as a soil amendment, reintroducing the toxin-causing molds.

“There is waste from each season of peanuts, but what are we going to do with it?” she said. “Since there is a possibility that aflatoxin can be taken up by plants directly from the soil, we want to be sure that the aflatoxin is broken down.

“Composting is a very simple technology and farmers need fertilizer. Now, let’s see how composting can be used to break down aflatoxin before farmers put compost back into their fields.”

Microbes, including bacteria, fungi and protozoa, have been shown to break down aflatoxin, but Akoto wanted to see how quickly and under what circumstances the decomposition occurred.

“We have found that some microorganisms can break down aflatoxin, which is a promising thing,” she said.

After adding three commercially sold composting starters to contaminated peanut meal, Akoto evaluated the results over six weeks to see how quickly the aflatoxin broke down.

Akoto worked with her graduate mentor Jinru Chen, professor of food science and technology in the UGA College of Agricultural and Environmental Sciences, to test the amounts of aflatoxin left in the compost. Chen’s research focuses on developing molecular detection and typing protocols for pathogens and bacteria that impact food safety.

The aflatoxin level decreased throughout the test, and it dropped most quickly in the first two weeks. Some aflatoxin persisted even after six weeks of composting.

Akoto performed the tests at UGA’s Griffin Campus and replicated the work at home in Ghana.

“We wanted to see how it would work in Ghana to make sure that the conditions were realistic and the data didn’t just come from the lab,” she said.

In Ghana, some of the starting samples contained 3,000 parts per billion (ppb) of aflatoxin, but that level dropped by 1,000 in just a week. In the U.S., 20 ppb is acceptable for consumption.

“It’s a plus for farmers that you don’t need to go buy a product. All you need is peanut meal; it has its own microflora,” she said. “If you are giving farmers a new reason to use known technology and, at the same time, telling them it won’t cost anything … that’s a bonus.”

Akoto’s father was a cocoa farmer, and she spent time in the fields near Kumasi, Ghana, as a child.

“I enjoyed harvesting oranges and learning about what happens on the farm,” she said. That developed into a wider interest in food safety from the field, to the market or processor, to the final consumer.

“At the market in Ghana, I see food safety issues and think, ‘We still have a long way to go,’” Akoto said.

Akoto is scheduled to complete her master’s degree in food science from the University of Georgia this fall and hopes to continue working toward a doctorate. 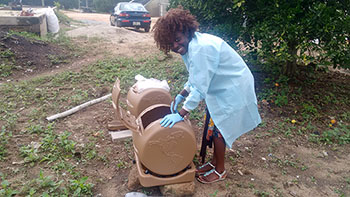