Georgia farmers are never surprised to see fall armyworms munching on their precious corn, sorghum and forage hay crops. They just hope for a low number of armyworms. This year’s population of the tiny destroyers, described as an “Armageddon-type outbreak” by University of Georgia entomologist David Buntin, is far from low.

A small grains pest expert with the UGA College of Agricultural and Environmental Sciences, Buntin spends his days tracking insects that can destroy Georgia row crops and working to determine the best methods of controlling them and establishing pesticide thresholds, or the number of insects that need to be present before a farmer should apply a pesticide.

“This year, the fall armyworms are way, way above the treatment threshold. They are here in much, much higher numbers,” he said. “As of the end of August, almost every pasture in central and north Georgia has been sprayed at least once and, for many of them, twice.”

Each year, the worms migrate up from the Caribbean and Florida. This year, they showed up early in corn and sorghum fields. Now they are in pastures earlier than normal.

When it comes to pastures, the armyworms love most all forage grasses, Buntin said, including bahiagrass, bermudagrass, fescue and mixes. Armyworm caterpillars also prefer turfgrasses and feed above the ground, primarily eating foliage and tender stems. Adult fall armyworm moths are active at night. Females lay between 50 and several hundred eggs in masses that hatch in just a few days. The life cycle from egg to moth takes about 28 days in the warm weather of August and September.

“The larvae take several weeks to develop. When they are small, they don’t eat much, but when they molt to the last stage, they can eat up an entire pasture in four to five days,” Buntin said.

The moths actually arrive in Georgia in May, but it takes “three to four generations” of proliferation of the pest to reach a point at which farmers have to apply control treatments. “By the last couple of generations, they have built up to damaging levels.”

Pike County, Georgia, hay farmer Jim Quick says it has been 10 to 12 years since he’s had a major problem with fall armyworms.

“Most of the time, I just monitor and watch for them in the fall of the year,” said Quick, who grows 20 acres of hay to feed his cattle and to sell to neighboring farmers.

He can attest to how quickly fall armyworms can wreak havoc on a field. One week he had a “pretty, green field.” Now, his field is brown.

“I had been out of town for a few days and I came home on Sunday and found them. By then, they had already wiped out half of my field, and the farm supply store was closed. If I caught them two or three days earlier, there wouldn’t have been near as much damage,” Quick said of the condition of his coastal bermudagrass crop. “They were eating closer to the ground on Sunday, but by Monday they were up on the stems and sitting on my tractor. It seemed like every stem had a worm on it.”

Twelve years ago, Quick saw the worms move from one acre of his field to destroying eight acres in just one day.

“That infestation was so bad, you could see the ground moving, it was so full of them,” he said. “That’s the worst I’ve ever seen them.”

Quick says that a large flock of blackbirds congregating in a field is a good indicator that the field is full of fall armyworms. The birds come in to eat the worms off the grass.

Normally, Quick would get three cuttings of hay from his field. Now, he likely won’t get the third cutting. Two cuttings will provide enough hay to feed his animals, with some left to sell.

“Even if I am able to get another cutting, it will be at a shorter cutting. If I could have just caught them two or three days ahead of time,” he said.

Quick and Buntin agree that Georgia’s extremely dry weather conditions contributed to the explosive population of armyworms this year.

“Fall armyworms are bad in south Georgia, but not as bad as in central and northern parts of the state,” Buntin said. “It’s bad (in south Georgia), but they have gotten more periods of rainfall,” he said.

Georgia farmers battle fall armyworm outbreaks every three to four years, he said. The last bad outbreak was in 2013, but the outbreak this year “seems to be a lot worse than normal, and the dry weather has compounded it,” Buntin said.

UGA experts like Buntin recommend several insecticides that farmers can spray, such as a pyrethroid product and a growth regulator.

“The local (farm supply) dealer says he can’t keep the two pasture products we recommend stocked because so many farmers are coming in for them,” he said.

Back in Pike County, Quick is glad to see his hayfields free of live armyworms, but, ironically, he’s brought more than 500 live worms back to his property. As a research coordinator on the UGA campus in Griffin, Georgia, he has donated an area of his field for a research trial.

“I put plastic tubes in the ground, dump in the armyworms and then treat each tube with different chemical combinations to determine which insecticides work best and at what rate,” he said. “I’d be lying if I said it didn’t feel a little odd to be bringing live worms so close to my crops, but I know the value in the research we’re doing.”

Quick was able to solve his fall armyworm problem with one spray treatment. That was not the case for one of his neighbors, a farmer who grows millet.

“He’s had to spray the same field five times,” he said. 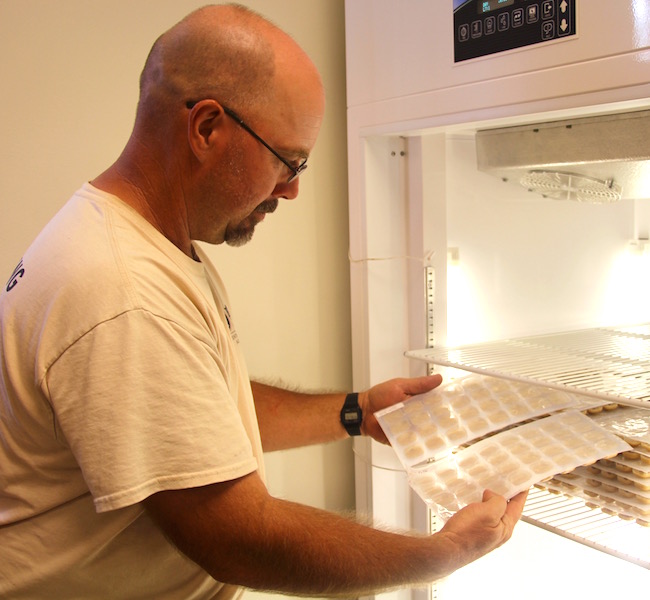