Two years into the job, University of Georgia peach specialist Dario Chavez is pleased with the development of his research program. The new research peach orchard in Griffin, Georgia, is filled with over 130 different peach tree varieties, several newly grafted potential varieties and a host of trees for irrigation and fertilization studies, all in an effort to help growers of the crop that gave Georgia its nickname — the “Peach State.”

In addition to the new orchard in Griffin, Chavez travels to Bryon, Georgia, to work with U.S. Department of Agriculture rootstock breeder Tom Beckman and to meet with Georgia peach growers. There are currently more than 10,000 acres of Georgia land devoted to growing peaches, and Georgia ranks third in U.S. production of the fruit.

“At the end of the day, the growers are comfortable with what they are doing,” Chavez said. “They are planting new orchards every year and it’s a stable production system. They are making money and supporting the economy.”

Chavez says Georgia peach growers offer a “really high quality” peach and are typically second- and third-generation farmers. “There’s a lot of tradition and a large knowledge base in growing Georgia peaches,” he said.

Under Chavez’s leadership, UGA College of Agricultural and Environmental Sciences graduate students on the Griffin Campus are looking at Georgia-grown peaches from a new perspective. Like their forerunners, the UGA scientists are still working to help Georgia farmers grow the crop as efficiently as possible, but they are also searching for ways to produce a crop that consumers want to purchase and eat.

“We are focusing more on fruit quality. Consumers buy the peaches for appearance, but then, when they bite it, they may have a different opinion about the eating experience than their opinion about the fruit appearance alone,” he said. “Looks are not an indicator of quality.”

“We are looking at aroma, flavors, textures and other characteristics from people who taste the peaches for us,” she said. “Then we will cross reference this information with instrumental data in the lab.”

If consumers like the aroma of a particular peach variety, the UGA scientists search for the compounds that create the aroma, she said. They also measure the sugars, acids and volatiles, or aromas, of the peaches and compare them to the consumer panel input.

“The aroma is the most interesting part. [The panelists] are picking up a lot of fruity, citrus, peach and, with a white-flesh peach, floral aromas,” she said. “Then we use the instruments to find the compounds that are responsible for those aromas.”

Belisle has been working with Georgia growers to test 45 varieties of peaches, five varieties per week during the summer growing season for the past year and a half. “Peaches have basically been my life and it’s a sweet life,” said Belisle, who admits she has never bought peaches, but has eaten her fill at work. “My lab mates and I evaluate the peaches together at night while we are rounding out the day and do our own makeshift study.”

Belisle, Chavez and Adhikari will share their results with Georgia peach growers. This information will also be used to select for varieties that could be used in breeding new peach varieties in collaboration with the USDA.

Another study within Chavez’s program is being conducted by UGA doctoral student Bruno Casamali. Under the direction of Chavez and CAES horticultural physiologist Marc van Iersel, Casamali is using the new UGA Griffin Campus peach orchard to conduct irrigation and fertilization tests.

“We believe the fertilizer numbers [that Georgia growers] use are based on California studies, which involve totally different climatic conditions [than we have in Georgia],” he said. “We want to make sure that growers apply the best rate for reproductive growth and good foliage in the spring and summer and good, quality fruit with good yield at harvest.”

This is the first year of study, which is funded in part by the Georgia Peach Council.

According to the 2014 Farm Gate Value Report, peaches grown in Georgia generated a farm gate value of $53.5 million. Peach County produced the most peaches with 2,500 acres, followed by Macon County with 2,060 acres. Peaches are the second most popular fruit grown in Georgia, behind blueberries.

In the future, Chavez plans to study new production systems for growing peaches. “I’d like to do density studies and see if planting peaches closer together or farther apart changes the game any while using the new, upcoming rootstocks like MP-29,” he said.

Sharon Dowdy is a news editor with the University of Georgia College of Agricultural and Environmental Sciences.
Authors:
Sharon Dowdy
Experts/Sources:
Dario Chavez 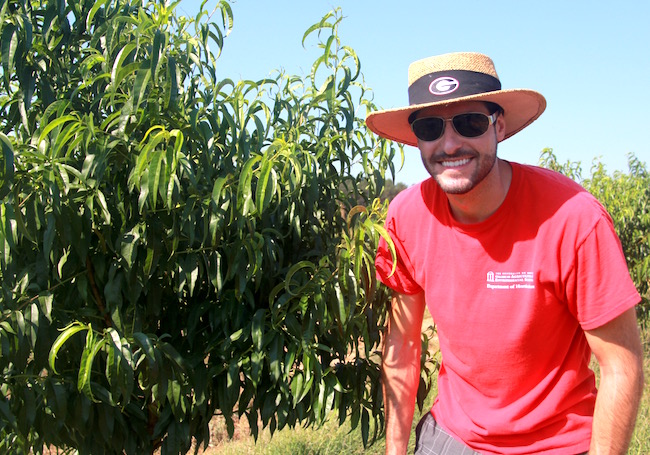 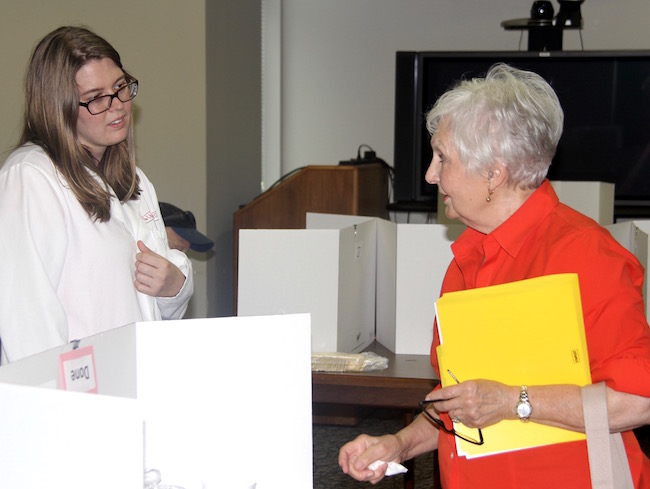