Spring-flowering plants are beginning to pop with color. As soon as their color fades, landscapers can prepare to prune and groom these plants.

Because flowering ornamentals form their flower buds at different times of the year, pruning times must be adjusted accordingly. Many spring-flowering plants, such as azalea, dogwood, forsythia, redbud and rhododendron, set flower buds in the fall, so pruning during the fall or winter months would eliminate or decrease their spring flower display.

Plants that typically flower during the summer form flower buds on new growth and can be pruned during the winter without affecting their flowering. Examples of this type of plant include crape myrtle and abelia.

Ornamental plants that are not grown for their showy flowers can be pruned in late winter, spring or summer months. Avoid pruning during the fall or early winter because it may encourage tender new growth that is not sufficiently hardened to resist the winter cold.

For more information on pruning, see the University of Georgia Cooperative Extension publication “Pruning Ornamental Plants in the Landscape” at http://extension.uga.edu/publications/detail.cfm?number=B961.

Sandra Edwards is an agricultural and natural resources program assistant in the University of Georgia Cooperative Extension office in Fayette County, Georgia. 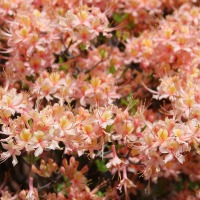