Sugarcane aphids have turned their back on their namesake and become a major pest for Georgia’s grain sorghum growers. The pest began infesting fields in the state two years ago and, last year, devastated farmers who chose not to apply spray controls, said University of Georgia small grains entomologist David Buntin.

“Farmers who didn’t spray last year didn’t harvest a yield, and others had to spray three to four times,” said Buntin, a UGA College of Agricultural and Environmental Sciences researcher based on the university’s campus in Griffin, Georgia.

Similar in appearance to the yellow sugarcane aphid, Buntin describes the pest as medium to pale yellow with black feet, black antennae and two black “tail pipes.” The adult aphid has black stripes on the wings, making it very distinctive.

The pest was discovered in the United States near Beaumont, Texas. In 2013, it was found in four states and 38 countries. By 2015, sugarcane aphids were found in 17 states.

In 2013, the insect shifted from its preferred host, sugarcane, to sorghum. “They’ll attack anything that has sorghum in the name, and Johnsongrass is their main alternative host,” Buntin said. The pest does not like wheat, oats, barley, rye, switchgrass or cool-season grasses.

“All the females are born pregnant, and they have a very high reproduction rate. The good news is that they don’t overwinter in Georgia, and they are not known to transmit any viruses,” Buntin said. “They like it hot and dry.”

Sugarcane aphids colonize on the undersides of leaves. Generally, by the time a farmer notices the pest, “the damage has been done,” Buntin said. Left untreated, the pest will reduce or prevent the plant’s head from emerging.

In addition to destroying a farmer’s crop, they also cause annoying damage. “They create a lot of sticky honeydew that can really make a mess of harvesting equipment,” he said.

The sugarcane aphid’s natural enemies include a host of lady beetles, hoverflies, green lacewings and a parasitoid.

Studying the pest in research plots on UGA CAES research farms, Buntin determined farmers should apply pesticides as control when 50 or more aphids are found on 25 percent of the crop. “Doing this during preboot or boot stage is critical to control damage,” he said. (“Boot” is when the seed head is developing, but is still inside the stem and has not emerged. “Preboot” is the vegetative stage before the seed head is present in the boot.)

Several insecticide seed treatments are available, all of which are equally effective for controlling the pest in the first 30 days. By 51 days, Buntin said, the treatment has dissipated.

In partnership with UGA Cooperative Extension entomologist Phillip Roberts, Buntin conducted trials using a variety of chemical treatments. The untreated grain sorghum plots did not produce heads as a result of the aphid damage. The best control method was determined to be Sivanto 200 SL at 4 to 7 fluid ounces per acre. Transform WG at 1 to 1.5 ounces also was effective.

Transform was used in Georgia in 2015 under an emergency use exemption to Section 18, which has expired, Buntin said. A new Section 18 exemption will be needed for 2016.

“Pyrethroid-type insecticides are not effective against the aphid. They will flare aphid populations, but kill the predators and parasitoids,” he said.

“I would suggest, once the seed treatment plays out, that farmers apply Sivanto and follow with Transform. Aerial applications need to be in the 5-gallon range. Coverage is critical, and you need to get the spray down into the canopy,” he said.

Buntin reminds farmers that no insecticides are labeled for use on sweet sorghum, which is used for making sorghum syrup.

“It’s going to be a tough year for sorghum, especially the forage and silage types,” said Buntin, who conducts research on all small grains grown in Georgia. “Farmers should try to suppress the aphids before the crop gets too big and should remember to spray with a ground sprayer.” 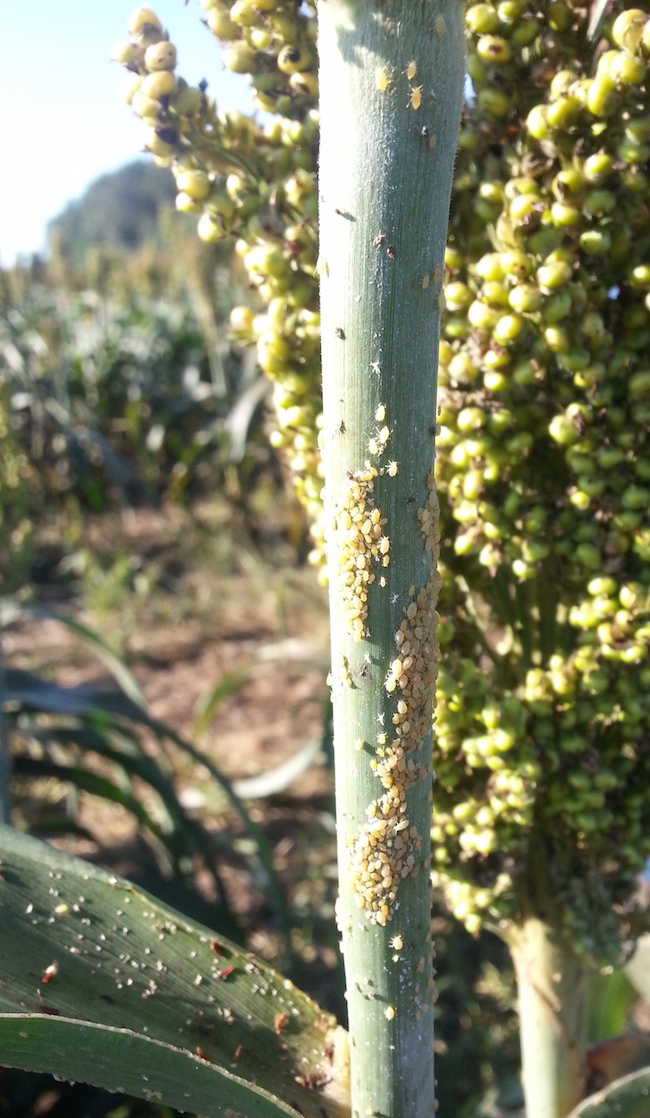