U.S. Global Malaria Coordinator Admiral Timothy Ziemer, who has overseen the reduction of worldwide malaria deaths by 40 percent over the last decade, will speak at the University of Georgia on April 14.

Ziemer has been called one of the “most quietly successful” leaders in public health for his efforts leading the U.S. President’s Malaria Initiative (PMI), a government initiative to combat malaria worldwide led by the U.S. Agency for International Development and implemented with the U.S. Centers for Disease Control and Prevention.

He will share the lessons he’s learned from this journey and his plans for the future from 4-5:30 p.m. on April 14 with his lecture “President's Malaria Initiative: the U.S. Government's Commitment to the Global Malaria Fight.”

“Public health and agriculture are inextricable disciplines,” said Dean J. Scott Angle, of the UGA College of Agricultural and Environmental Sciences. “The fight against malaria is just one of the many crossroads. A healthy world begins with a sustainable environment and a nutritious food supply. Promoting agricultural practices that include effective pest management and controlling insect vectors that spread disease is a vital juncture at which we must all work together to promote worldwide health improvement.“

Ziemer’s lecture is free and open to the public. It will be held in Masters Hall at the Georgia Center for Continuing Education on UGA’s Athens Campus. The UGA College of Agricultural and Environmental Sciences, the UGA College of Public Health and the GRU/UGA Medical Partnership is hosting the lecture.

Since taking the helm of the President’s Malaria Initiative (PMI) in 2006, Ziemer has worked to align the efforts of aid groups working to end malaria.

He has insisted on accountability for outreach funding and helped reduce the impact of a disease that sickens almost 200 million people annually and kills between 500,000 and 600,000 a year, according to the World Health Organization.

PMI works in 19 countries in sub-Saharan Africa and in the Greater Mekong Subregion, which includes Cambodia, southern China, Laos, Myanmar, Thailand and Vietnam. The agency’s strategy coordinates medical care, mosquito net distribution and pest management strategies in the countries where they work.

Before his appointment as U.S. global malaria coordinator, Rear Admiral Ziemer served in the United States Navy and later as executive director of World Relief, a humanitarian organization.

Born in Iowa, Ziemer was raised by missionary parents in Vietnam. He joined the U.S. Navy after graduating from Wheaton College and became a pilot.

He returned to Vietnam during the U.S. war there. During his naval career, Rear Admiral Ziemer commanded several squadrons, naval stations and an air wing supporting the first Gulf War. Subsequent assignments included serving as the senior fellow with the Navy’s Strategic Studies Program at the Naval War College and deputy director for operations in the National Military Operations Center on the Joint Command Staff.

For more information about attending the event please call Candy Sears at 706-542-3924.

This event is part of the CAES Spring Showcase, a celebration of agricultural and environmental sciences on UGA’s Athens Campus. Visit caes.uga.edu/students for more information. 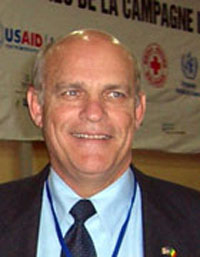