Profits projected to rise for poultry, pork and beef producers, down for row crop farmers

Agriculture is the biggest industry in Georgia, and it’s only continuing to grow.

Although situations vary for different commodities, University of Georgia College of Agricultural and Environmental Sciences (CAES) economists were optimistic about the coming year.

“Overall, when you look at agriculture for the state of Georgia, this is a good place to be and a good time to be here,” said CAES Dean J. Scott Angle, at the college’s 2015 Georgia Ag Forecast, an annual economic outlook series for farmers and agricultural business leaders. “For the most recent years, agriculture has an impact of $13.3 billion on the economy. By the time the food gets to your plate or the clothes get on your back—and forestry is included in that—agriculture has an impact of $72.5 billion, which makes it, by far, the largest industry in Georgia. It generates about 400,000 jobs across the state.”

Agriculture’s impact on the state economy and Georgia’s influence on agriculture nationwide is only projected to increase as production of some crops moves from water-strapped areas out West to states like Georgia, where the climate, knowledge base and resources can support expanded agricultural endeavors, according to Angle.

“We are becoming the bread basket of the world,” Angle said. “California agriculture is starting to go out of business because of lack of water, but the world’s population is growing... A lot of what happens here in the Southeast—but particularly in Georgia because we are the largest state—is going to be critically important… This is the most important place to be in agriculture right now.”

One of the factors positioning Georgia to lead the nation agriculturally is the state’s groundbreaking research into agri-technology at both UGA and the Georgia Institute of Technology.

Doug Britton, program manager for the Agricultural Technology Research Program at Georgia Tech, told the crowd gathered at this year’s Ag Forecast that engineers at Georgia Tech are working together with agricultural specialists to generate new technologies that will transform agriculture.

“Real innovation starts at the intersection of [our] disciplines,” he said, addressing the 2015 Georgia Ag Forecast. “Bringing together the specialists in the agricultural sector and the specialists in the engineering sector, that’s when that overlap is really powerful… Leveraging technologies from across the country and developing new technologies specifically for agriculture is what is going to position Georgia as a thought leader in this space.”

From micro-drones that will allow farmers to build 3-D models of each bush in their berry farm to ground-roving robots that will scout for signs of disease before symptoms arise, agriculture is on the cusp of a technological revolution.

However, the outlook for this year’s agricultural landscape has a lot more to do with global grain stocks and domestic economic conditions than robotics.

While projections for all sectors are favorable for producers, meat producers will have an especially good year with feed prices expected to stay relatively low and consumers’ discretionary income on the rise, economists said.

Pork and beef prices are expected to stay relatively high through 2015, but may start to slip as we approach 2016 and farmers continue to build their herds. Poultry prices will remain relatively stable, despite a ban on U.S. poultry imports in China and a possibly forthcoming ban from India.

Growing domestic consumption and low feed prices should allow U.S. poultry growers to stay profitable despite the loss of China as a market.

As for row crops, UGA economist Don Shurley projects that farmers will be shifting land from corn and cotton to peanuts and soybeans this year.

China has built up stocks of cotton over the last several years, and the result is very depressed prices for cotton, Shurley said. The price of cotton fell more than 25 percent over the last year.

“We all knew this was coming; we just didn’t know it would happen this quickly,” he said. “We’ve gone from 80-cent cotton to 60-cent cotton in just the last few months.“

Shurley believes that farmers will cut the amount of cotton they plant this year by as much as 15 percent and that increasing demand—brought on by lower prices—will start to drive prices a little higher in 2015, perhaps to between 65 and 75 cents.

“If we can get production and demand back into a much closer balance, then we will start to see prices firm up and things will get a little bit better,” Shurley said.

Similarly, large global stocks of corn and a leveling off in demand for corn as an ingredient in ethanol have combined to drive down the price of corn. On the other hand, lower corn prices are increasing the amount of corn that’s being used as animal feed. With reduced acreage and increased demand for animal feed, Shurley feels that prices will settle around $4.50 a bushel.

Prices of peanuts and soybeans, however, will remain relatively stable, he said.

For more information about the 2015 Ag Forecast, visit www.caes.uga.edu/events/agforecast/. 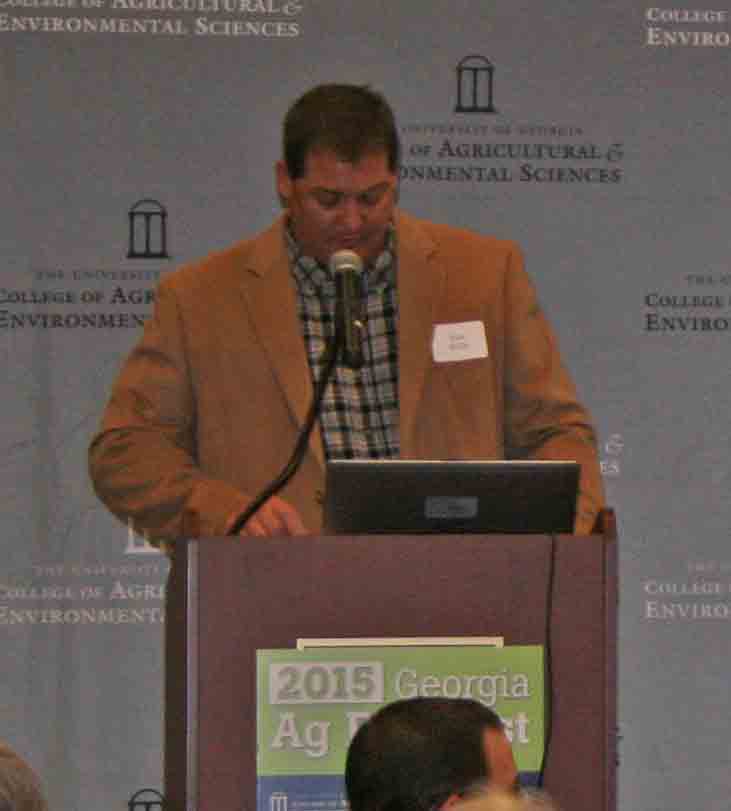