Organic vegetable farmers in the Southeast now have a successful model for planting summer cover crops with high-value, cool-season crops, thanks to a University of Georgia study. The two models use a series of crop rotations to increase yields, control insects and diseases, improve crop quality and build soil biomass.

This system’s approach can be used to develop production recommendations and a production budget for organic farmers or for conventional growers interested in transitioning to organic production.

“The purpose of the project was to take a systems approach to evaluate crop rotations to produce high-value, organic horticultural crops in the Piedmont and Coastal Plain of the Southeast,” said project investigator George Boyhan, a horticulturist with the UGA College of Agricultural and Environmental Sciences.

Originally, Vidalia onion growers interested in organic production were targeted for the study. Between 300 and 400 acres of these onions are grown organically in Georgia.

“We wanted to see what cool-season, high-value crops could be incorporated in the crop rotation for onion growers in order to boost their profits,” Boyhan said. “As the study progressed, we found that the crop rotations would be suitable for any vegetable growers interested in organic production.”

The rotations were developed with growers’ input to improve soil quality through cover crop biomass additions, to rotate between crop families to break pest cycles, to use cover crops to supply nitrogen and suppress weeds and to use cover crops and crop cycles to suppress nematodes.

“The cover crops worked best when they were paired with a certain cash crop for a specific function,” Gaskin said.

For example, sunn hemp planted before onions: “Onions are a high nitrogen-demanding crop and sunn hemp is known to fix nitrogen” and suppress nematodes and weeds, Gaskin said.

A sunn hemp rotation plus nutrients in the soil provided 75 percent of the nitrogen for the onions. By contrast, the sorghum-sudan and cowpea mix grown before carrots may not have been the best rotation, Gaskin said.

“The idea was to suppress weeds and nematodes. But the sorghum dominated the mix, outperforming the cowpea,” she said. “Yields with carrots were not as good.”

Insects were practically nonexistent, although there some disease issues were found.

“We chose cool-season crops because they are the easiest to grow organically in our region due to low insect and disease pressures,” Little said. “As far as diseases go, I’d say it was a success.”

Some minor Botrytis was found in onions, Sclerotinia was noted in lettuce and beans, and a few leaf spots were recorded in strawberries. Very minor fruit rot problems were found. There was no evidence of root diseases in strawberries, and no diseases in potatoes or carrots, she said.

Over the three-year period, onions produced the highest yields, exceeding the Vidalia onion county yield average for each of those years. Lettuce and broccoli yields were also high. Although the potatoes and carrots stored well, their yields were low.

As far as the economics of the crops – based on variable and fixed costs, pre-harvest variables, and harvesting and marketing costs – the onions had the highest net return. The onions averaged more than $14,000 per acre and the lettuce followed, with a net return of more than $9,000 per acre over the three-year period.

The UGA study found the net return for the cash crops generally increased over time, except for the strawberries. Summer cash crops of bush beans and southern peas were not profitable.

The highest value crops also had the highest total costs; however, total costs were lower as the acres increased.

Researchers speculate the growing season was too short between cool-season crops.

Cover crop costs averaged $6,000 per acre over the life of the rotation. The cover crops served as a weed control-soil building-nutrient cycling program.

“The crop rotations show promise for mid-scale producers,” Boyhan said, ”but the one thing we learned is that timing is critical. This is an intensive system that requires work and a market to sell the product.”

To view the complete study findings, go to http://tinyurl.com/LS10225. 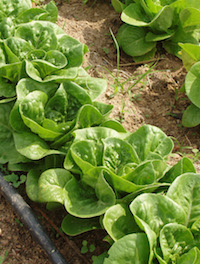