When we think of invasive species we usually think of insects, plants and animals that have been shipped to Georgia from another part of the world, but it’s a two-way street. Georgia’s native plants and insects can be just as devastating overseas if they take root in a foreign ecosystem.

Last month, the UGA Center for Invasive Species and Ecosystem Health in Tifton hosted a delegation of Chinese agricultural and forestry scientists who were hoping to exchange strategies on how to stop the spread of invasive species in both the U.S. and in China.

Both areas of the world have to deal with invasive species, although, they come from different sources, said Dave Moorhead, co-director for the center.

“It’s a two-way street, and we hope we can get some cooperation from some of these contacts in China,” Moorhead said. “We have some things that are native over there that are invasive here and vice versa.”

In China, they are concerned about invasive species contained in exports from the U.S. ... They talked to us about pine wood nematode in U.S. log exports from Georgia. That’s a big problem for them,” he said.

In south Georgia, Chinese native species such as tallow trees and Chinese privet, which do not have native insects in Georgia to control their growth, have become major problems.

“They were moved here from other parts of the world as ornamentals and they overwhelm our native habitats,” Moorhead added.

Moorhead and UGA entomologist Keith Douce hosted the Chinese visitors’ tour of Tifton. Douce is co-director of the UGA Center for Invasive Species and Ecosystem Health.

The group visited the farm of Don Darby in Hahira, Ga., to study several acres infested with Chinese tallow trees. Native to China, the trees have a variety of uses ranging from herbal medicine to biodiesel. In the Southern U.S. the plant is considered invasive - serving no purpose while taking needed nutrients and growing space away from other plants and trees.

“It has no value here,” Moorhead said. “At the Hahira site, one tree was planted more than 30 years ago and it produces so much seed that it spread into adjacent forests and pastures. Tallow trees were initially found near the coast, but are all over the South today. After the Gulf hurricanes several years ago, tallow trees are now found all over East Texas. They can grow just about anywhere and that’s what makes them hard to get rid of.”

The Chinese delegation also heard from Mark McClure, a forest health specialist with the Georgia Forestry Commission, who discussed how tallow trees can be managed. On a tree-by-tree basis, McClure showed the “hack and squirt” method where a small cut is made in the trunk of the tree with a hatchet and a small amount of Arsenal herbicide is applied which kills the tree.

The entire field, which included many types of trees that are indigenous to south Georgia, was sprayed a little more than two years ago using Clearcast herbicide, and only the tallow trees had been impacted, McClure said.

In addition to the tallow tree tour, Morehead and Douce presented an overview of the UGA Center for Invasive Species and Ecosystem Health.

The visitors also saw a demonstration of prescribed fire use, learned about herbicide treatments for various species at the Brumby-Tift Tree Farm, toured the International Forest Company’s Containerized Forest Seedling Nursery in Moultrie and toured the Pennhatchee Watershed Project in Dooly County to see the environmental and agricultural problems caused by feral hog populations.

Chris Beckham is a news writer working with the University of Georgia Tifton campus and the Tifton Chamber of Commerce. 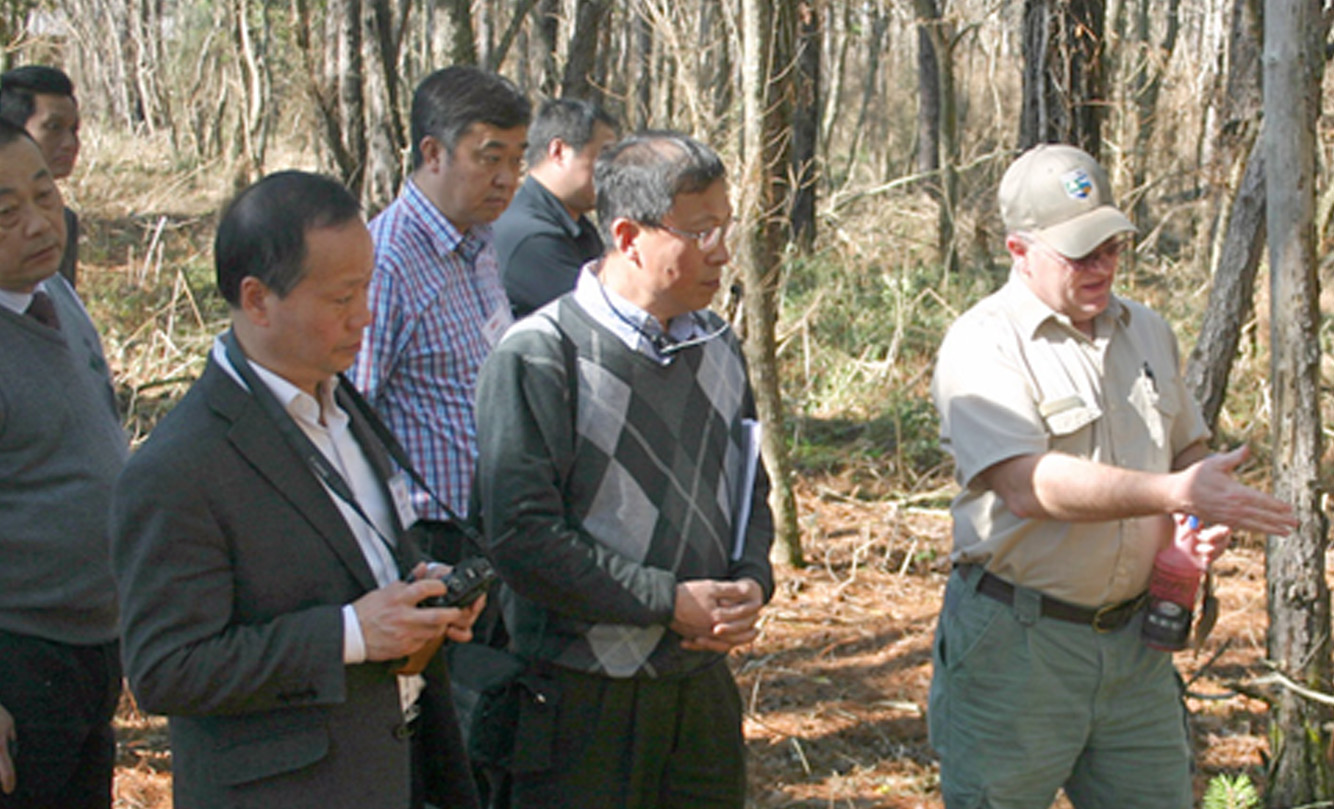