December was warm and wet across most of Georgia, a change from the cold and dry conditions that dominated November. Warm daytime high temperatures and higher than normal nighttime lows broke records.

Surges of warm air from the Southwest kept the state warmer than normal. Some of the warmest temperatures occurred overnight, as strong winds brought record-setting temperatures to much of the state.

On Dec. 22, another stream of warm air moved into the state and broke records. In Savannah, the daytime temperature hit 83 degrees — breaking the city’s all-time, record-high temperature for December, which was set two weeks earlier on Dec. 6. Records for high nighttime lows were also set on Dec. 6 in Atlanta, Athens and Columbus, and in Savannah, Augusta and Alma on Dec. 22.

Atlanta observers reported a record-high daily rainfall total on Dec. 22 of 3.12 inches. This surpassed the daily record of 1.78 inches set in 1907.

The highest, single-day rainfall from Community Collaborative Rain, Hail and Snow Networks stations was 5.88 inches, recorded near McDonough in Henry County on Dec. 23. Another observer, near Woolsey in Fayette County, reported 5.6 inches on the same date. The highest monthly total rainfall recorded by a CoCoRaHS observer was 14.01 inches west of Clayton in Rabun County, followed by 13.3 inches measured near Cedartown in Polk County.

The U.S. Army Corps of Engineers noted this was the wettest December in the Thurmond Dam sub-basin since records began in 1948. Reservoir levels rose rapidly during the month as rainfall continued across the basin. This put reservoir levels above the summer full-pool levels and into flood storage. Some recreation areas, including boat ramps and fishing piers on J. Strom Thurmond Lake, were temporarily closed due to the impact of the high water levels.

December’s wet weather helped set annual precipitation records for 2013 - already one of the wettest on record. Macon broke its all-time yearly record with 72.91 inches in 2013 - 27.23 inches above normal. This is more than double the 32.41 inches the area received in 2012.

These amounts, as well as records seen at other stations in Georgia, are still being verified and will be discussed in the annual summary released later this month. 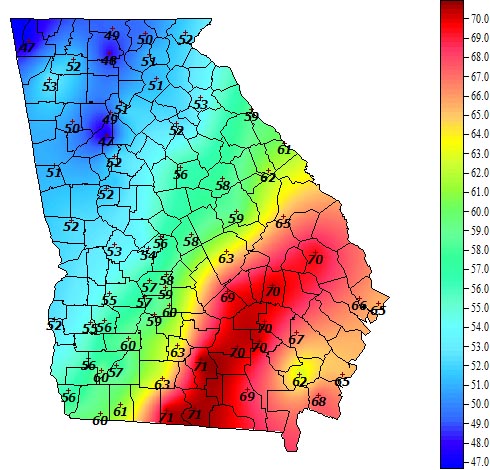 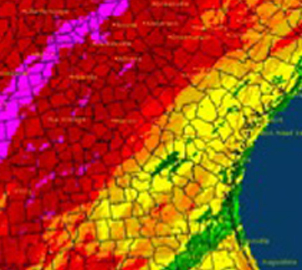