By Chris Beckham for CAES News

Greg Fonsah, a College of Agricultural and Environmental Sciences economist, has created his own little corner of the tropics on the University of Georgia Tifton campus. Less than 100 yards away from his office, Fonsah walks through row after row of tall broad-leafed foliage. A quick smile is evident as he swings his machete to and fro, shearing away leaves and branches as he goes.

Though the plot stands within sight of the much-traveled road in front of the UGA Tifton Campus Conference Center and is visible from Interstate 75, few realize exactly what it contains. Amid the experts who deal in peanuts, cotton, vegetables and tobacco, Fonsah likes to tell people about his beautiful field of bananas.

“This is not a surprise to me,” said Fonsah in his thick accent that has never left the Cameroon native. “Most of my colleagues said it would not be possible to grow bananas here. But because the conditions are similar, I knew it was possible. The bananas here are different, but they are very good.”

While unique, Fonsah and colleagues actually started their banana research in Savannah in 2002 before starting a project in Tifton in 2009. The professor has an extensive background in the field, working for Del Monte and Aloha Farms for almost 15 years before coming to UGA in 2001. He believes banana production can be an entirely new and unique field for Georgia farmers, and he said the interest is already there. Although Fonsah says more studies need to be done, farmers are already calling him for information.

One fact is not in dispute — Americans love bananas and lots of them. According to Fonsah, bananas are the most commonly consumed fresh fruit in the country, and consumption rose from 7 pounds per person in 1970 to 10.4 pounds per person in 2010. Nearly all of those bananas, an estimated 99 percent by Fonsah, come from overseas.

“The United States spends $1.9 billion on bananas every year,” Fonsah said. “That’s bananas and plantains. But there’s no reason all of that money has to go somewhere else. The weather is conducive for cold-hardy and short-cycled banana cultivars here, and with the diverse cultural backgrounds, there is a niche market for bananas.”

Fonsah said he has about 65 different varieties on his plot for consumption, cooking and ornamental use. But what he pulls off his plants is not what you usually see at your local grocery store. Americans are most accustomed to eating Cavendish bananas, which are a bit different than the Veinte Cohol and several other varieties that Fonsah has grown. The Veinte Cohol is a short-cycle banana, which can be planted in the spring and will produce a bunch in about six months. It can be harvested in the fall (before the first frost) and is a smaller, flatter, sweeter variety.

“We have to do more studies on the short cycle, cold hardy and ornamentals because they are not ready for commercial harvest yet,” Fonsah said. “But there is a lot of impatience because (producers) want them on the market now. The next level we must go to is harvesting and doing consumer studies.”

Still, Fonsah continues to look for new varieties. In his banana field, Fonsah also grows Saba bananas, which are mainly used for cooking, like plantains. Unlike the Veinte Cohol or other varieties that are consumed, the Saba bananas grow in a tight bunch on a very large and tall pseudostem. Fonsah said they are starchy, pulpy and a great source of potassium.

A respected expert in the field of fresh produce production and marketing, Fonsah has published hundreds of articles in professional journals on banana production as well as tomatoes, peppers, blueberries, pecans and other fruits and vegetables. Fonsah considers his little-known banana paradise at the Tifton campus his real classroom and sanctuary. He tends to the plants regularly and has had students from around the world join him in his research, trying to determine exactly which varieties work best under the south Georgia sun.

“There are many uses for the plants, more than just the bananas themselves,” he said. “There are other uses for alternative energy and for ornamental varieties. I think they will be very popular once we do more research. We are still learning, but we know the environment here is manageable for the identified cold-hardy and short-cycled banana cultivars. They are mostly grown in tropical conditions. It’s exciting what we are learning, and we have growers who want to look at this as another potential commercial crop.” 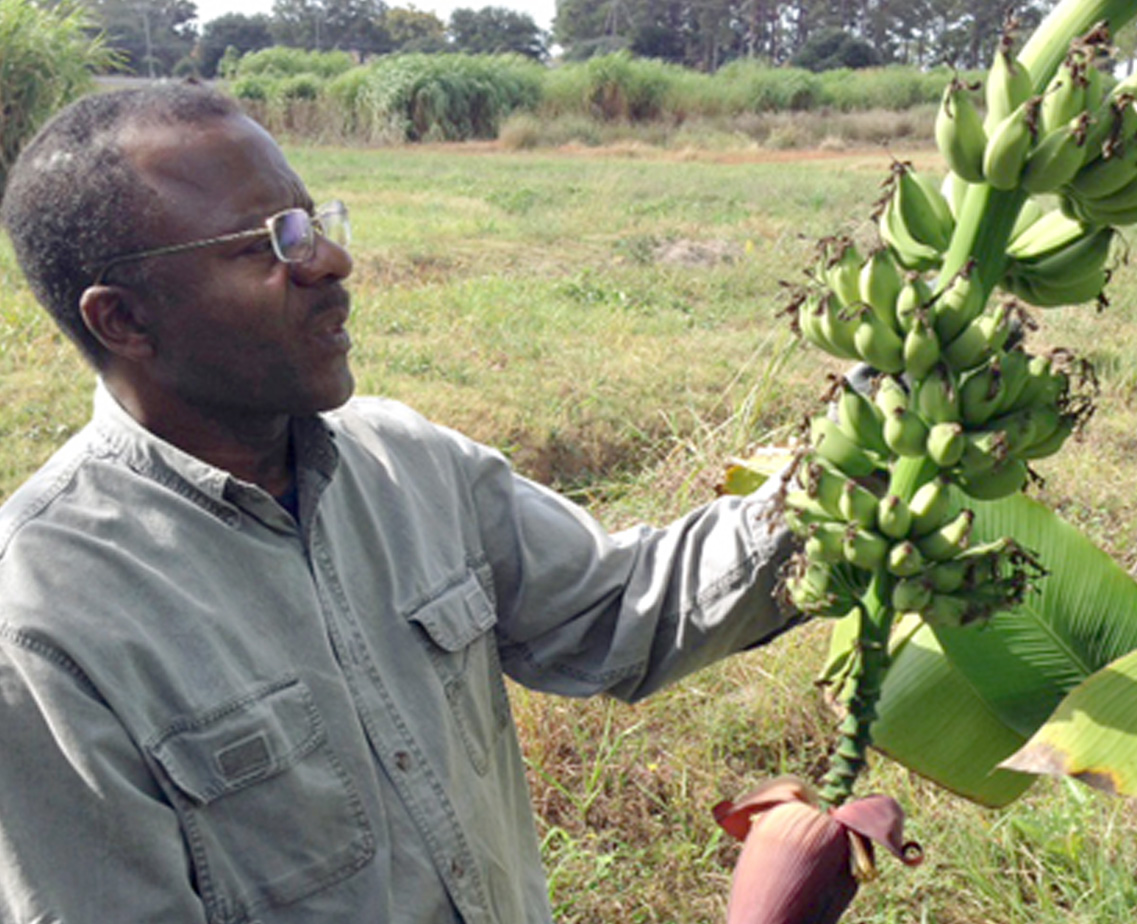