A newly-hired University of Georgia entomologist hopes to develop genetic resources to understand fire ant success in the southeastern United States. Ultimately, this research could lead to new methods to reduce the number of fire ants inflicting pain on humans and taking over lawns and pastures across Georgia.

“I’m searching for methods to knock down specific genes in the fire ant. The ability to perturb gene function can help us better understand the basis of traits related to fire ant social structure and population density,” said Brendan Hunt, an entomologist in the UGA College of Agricultural and Environmental Sciences and the newest faculty member of the Griffin campus.

Hunt earned a doctorate at Georgia Tech where he studied fire ant genetics and molecular evolution of social insects. He was also involved with the sequencing of the fire ant genome.

He is also interested in how environmental factors affect animal development. Hunt says a “model example” of the environment’s influence on development can be found in honeybees and fire ants.

“A female honeybee or fire ant egg can develop either into a queen or a worker and based on nutritional and feeding differences during their development,” he said. “A queen actively produces and lays eggs for a long time and lives for a long time while a worker is basically sterile.”

To build his research program at UGA, Hunt is collecting fire ants, an easy task as he’s found plenty living outside his office. “They are everywhere on this campus, which is great for me. One of the reasons fire ants are so successful is that they love mowed lawns, meadows and farmland,” Hunt said. In addition to studying fire ants, Hunt teaches undergraduate classes on the UGA Griffin campus.

For information on how to control fire ants in Georgia, see the UGA CAES publication “Managing Imported Fire Ants in Urban Areas” at www.caes.uga.edu/publications. 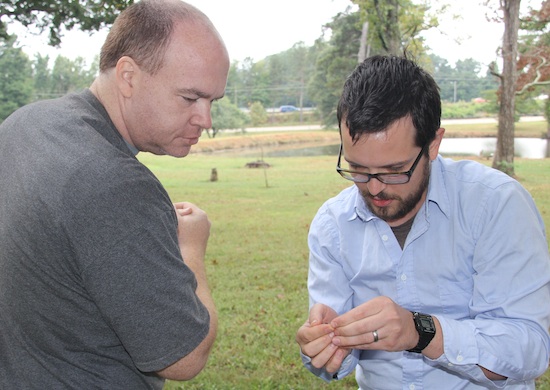