On Oct. 1, the University of Georgia College of Agricultural and Environmental Sciences recognized its staff and faculty who have demonstrated excellence in the college’s teaching, research and Extension missions with the annual D.W. Brooks awards.

“Some think world-changing innovators like Norman Borlaug, Glen Burton and D.W. Brooks are a rarity that may never again be seen in our high-tech world,” said J. Scott Angle, the college’s dean and director. “But we know differently. If you look down the list of those we honor today, and dozens of others among our faculty ranks, you will see great potential, innovation and success that will matter in this world and in agriculture for generations to come.”

This year’s award winners were honored at a ceremony at the UGA Center for Continuing Education.

The annual awards are named after D.W. Brooks, who graduated from the College of Agricultural and Environmental Sciences in 1922. Brooks founded the agricultural firm Gold Kist Inc. while serving as a professor of agronomy at the college. He also founded Cotton States Insurance Co.

College administrators established the D.W. Brooks Faculty Awards for Excellence in Teaching in 1981 to recognize faculty members who made outstanding contributions to the college’s teaching mission. In 1983, administrators expanded the awards to include research, Extension and county Extension programs. An award for international agriculture was added in 1988.

This year’s D.W. Brooks Award winners are listed below.

Stice is a Georgia Research Alliance Eminent Scholar in the college and director of the UGA Regenerative Bioscience Center. His current research activities range from working with the Bill and Melinda Gates Foundation to developing disease resistant livestock in sub-Saharan Africa and stem cell therapies for stroke and Parkinson’s disease.

Graves has been on the faculty of the UGA department of animal and dairy science since 2001. He teaches four classes and three labs and serves as a graduate and undergraduate student adviser, Dairy Science Club adviser, Dairy Judging Team coach and departmental Extension coordinator. When not on campus, he works with dairy producers and organizations across Georgia and coordinates the Georgia 4-H Dairy Youth Program.

Aggrey’s research interests include mapping poultry genes for growth and development, microRNA predictions and nutrigenomics—an emerging field that researches the interaction between genomes and nutrient use. Aggrey co-edited the definitive text “Poultry Genetics, Breeding and Biotechnology” and regularly writes and speaks globally on the molecular basis of nutrient and feed use.

Waltz joined the UGA Turfgrass Team in 2001 as a turfgrass Extension specialist. He conducts research projects in many areas of turfgrass management, especially evaluating how various turfgrass species respond to the environmental stresses of the Southeast. He has published in scientific journals and trade magazines, regularly presents to turfgrass professionals and homeowners, and manages the UGA turfgrass website www.GeorgiaTurf.com.

Huang is a professor in the department of food science and technology and an adjunct professor in the department of marine sciences. His research areas include food safety and microbiology, seafood technology and product development. He currently is focusing on the application of nanotechnology in rapid detection techniques for foodborne pathogens and toxins. Huang teaches several classes on new product development and the science behind flavors and serves as program director for the CAES China study abroad program.

Jacobs is the agriculture and natural resources agent for the UGA Extension offices in Pierce and Ware counties. He began his Extension career in 1995 and has since gained recognition for his research and educational efforts on a variety of crops. He is also recognized as an Extension leader, serving as a mentor for new county coordinators and promotion candidates. Since 1998, Jacobs has been involved in 15 research trials evaluating suppression methods for tomato spotted wilt virus. He also has assisted a local olive producer since 2007 on the first, commercial olive planting in Georgia.

As a professor in the department of agricultural economics, Centner developed the college’s pre-law program, environmental law minor and agribusiness certificate. He currently serves as director of those programs and teaches environmental, public health and agribusiness law courses. His research program involves the policy analysis of current issues confronting agriculture and the environment, including the application of findings that enhance agricultural performance. He has delivered lectures, seminars and papers in 30 countries.

Rema has served as a research technician with Miguel Cabrera in the department of crop and soil sciences for 19 years and has worked in the department for more than two decades. He is responsible for field and lab work related to the application of animal manures to crop and pasture land. His area of work focuses on poultry litter and a mixture of poultry litter and bedding material.

McKenzie has served as the feed mill supervisor at the UGA Poultry Research Center since 2007. He blends custom formulations of corn, soy and nutrients, allowing poultry researchers to test the effect of different ratios on growth and other variables. McKenzie’s role is critical to faculty researching livestock nutrition. The mill, which produces specialty feed for poultry and swine research projects, turns out 8 to 10 tons of feed a week. 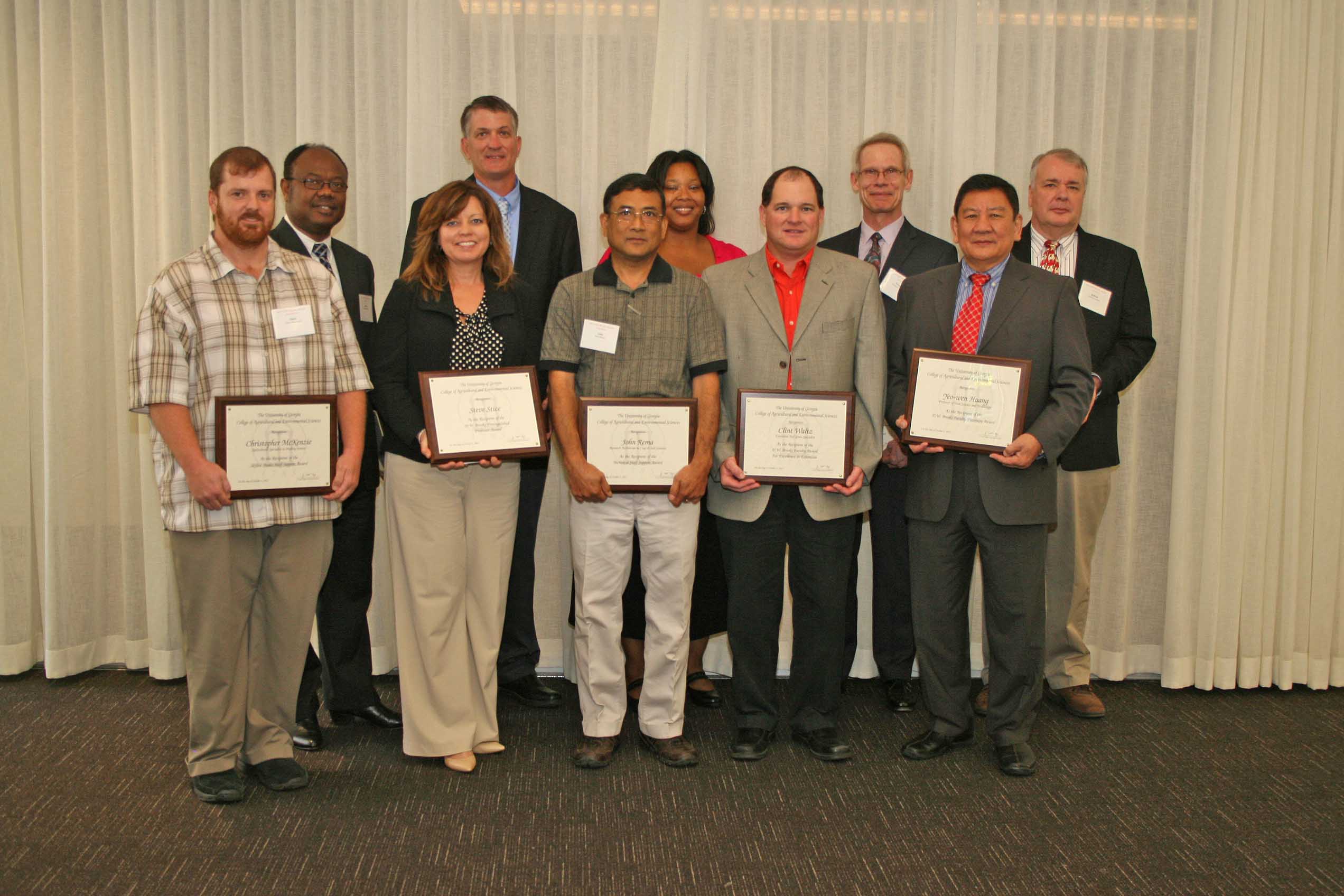 CAES News
Researchers use AI, engineering to address poultry heat stress 10/07/22 Maria M. Lameiras
Agriculture is the No. 1 industry in Georgia, and poultry is the largest sector of that industry, with nearly 1.4 billion broiler chickens produced each year on thousands of farms around the state.

CAES News
UGA biological science major among first recipients of Voyager Scholarship 10/06/22 Stephanie Schupska
Leah Whitmoyer of Tucker, Georgia, a third-year student in the UGA College of Agricultural and Environmental Sciences, is one of 100 college students from across the nation to be selected for the inaugural cohort of the Voyager Scholarship, the Obama-Chesky Scholarship for Public Service.

CAES News
Reusing poultry litter can reduce antibiotic-resistant Salmonella 09/27/22 Emily S Davenport
When many of us hear about bacteria, we associate it with illness. But certain bacteria can be helpful in preventing disease, not causing it. For example, consuming probiotics, or beneficial bacteria, to improve gut health has risen in popularity in recent years, both for human and animal wellness.

CAES News
Study finds that SARS-CoV-2 can persist for more than a month on frozen berries 09/22/22 Maria M. Lameiras
According to the University of Georgia Center for Food Safety study, SARS-CoV-2 experimentally introduced onto berries remained infectious on frozen berries for at least a month. Refrigerating berries at 39 degrees Fahrenheit showed a 90% reduction in SARS-CoV-2 infectivity over the course of three days, as did washing berries before freezing.
Subscribe for Updates