The students competed and won first place in regional competitions to earn the right to travel to Atlanta for the state competition.

There, the students competed in a variety of categories ranging from communications to companion animal science to photography to public speaking. Each gave a 12-minute presentation before expert judges and prepared portfolios detailing their research, leadership and service projects.

“Georgia 4-H held the first boys corn contest in 1905 and after 109 years of Georgia 4-H, young people are still developing life skills that will prepare them to be productive and contributing citizens of tomorrow’s workforce,” said Arch Smith, state leader of the Georgia 4-H program.

“No one showed off their prize ears of corn, but all of the students demonstrated their project accomplishments and skills in areas like communications, science, performing arts, public speaking, family and consumer science and agriculture,” he said. “Being around this group of young people will reassure you that the future of our state and nation will be in good hands.”

When asked, the majority of this year’s winners said 4-H helped them gain confidence and public speaking skills.

“When I first joined, I was terrified at the thought of giving a speech. I was encouraged by my awesome 4-H leaders and I presented a speech,” said Jordan Haney, 15, of Dawsonville. “It wasn't so bad. So I continued to do speeches for my homeschool 4-H meetings. Then I began writing presentations for DPA. Through this I became almost unafraid of giving a presentation. I am now able to present a speech well.”

Eight-year 4-H’er Wesley Jackson, 17, of Wrightsville was especially afraid of speaking in public. “I stutter, and if it wasn't for district project achievement, I would not have the nerve to even stand up and speak to anyone. I have gained so much confidence from doing something so simple as presenting a speech,” he said. “I do not let this condition hold me down by any means, but if I never would of started competing through 4-H, maybe I would not be as outgoing because of my stuttering.”

Kayla Jenkins, a six-year 4-H’er from Ludowici, says she has gained self-confidence. “I have met many new people and made life long friends through 4-H,” she said. “There is so many benefits to being in 4-H but I think the biggest is learning that I can be who I want to be, and it's ok.”

Melissa Maynard, 18, of Summerville coordinated a prom dress drive and donated more than 90 dresses to teenage girls in her county. “I learned marketing skills and how to collaborate with others to accomplish a successful event,” she said. “And, I was proud to help the girls who were in need of a dress, who otherwise may not have been able to attend the prom.”

Emily Kate Bridges, 16, of Lexington volunteers with search and rescue operations in Oglethorpe County. “I often take food and water to emergency calls for fires as the firemen need rehab from the intense work fires require,” she said. In 2012, she helped feed more than 400 searchers and assist with a search for a missing elderly man.

Seventeen-year-old Anthony Catanzariti’s project reached far beyond his Glennville community. He led fundraiser to buy mosquito nets for children in Mali to reduce their risks of contracting malaria. “Through this I learned that there are people who without our help would have most certainly suffered, but knowing we helped them has instilled me with a sense of purpose and a desire to help others,” he said.

This year's Georgia 4-H winners, projects and donors, listed by their home counties are:

Madison Carter won the companion animal category sponsored by William and Edna Sell. She is the daughter of Gerald and Cynthia Carter of Alma.

Samaria Spencer won the dog care and training category sponsored by the Georgia Veterinary Medical Association. She is the daughter of Sheila Spencer of Macon.

Emily Barnes won the fashion revue category sponsored by the Georgia Master 4-H Club. She is the daughter of Jerry and Jane Barnes of Jackson.

Ashley Thigpen won the general recreation category sponsored by the Georgia Recreation and Park Association, Inc. She is the daughter of Terry and Kerry Thigpen of Folkston.

Melissa Maynard won the dairy and milk science category sponsored by Angela Broder Nemeth, Henry and Judy Hibbs and the family of Frances McKissick in memory of Bobby Gene McKissick. She is the daughter of Mitch and Kathy Maynard of Summerville.

Veronika Rzucidlo won the performing arts-dance category sponsored by Burley and Connie Page. She is the daughter of Dorota and Jacek Rzucidlo of Athens.

Rachel Luoma won the health category sponsored by Dr. Greg L. Jones. She is the daughter of Keith and Linda Luoma of Martinez.

Hanna Dunnavant won the forestry, wood science category sponsored by Bill Lott, Paulding Timber Products, Inc. and the Georgia 4-H Foundation. She is the daughter of Mickey and Janann Dunnavant of Cordele. Dowdy White won the computers category sponsored by the Georgia 4-H Foundation, Georgia Power and AT&T. He is the son of Billy and Gwen White of Cordele.

Grace Webb won the sheep and meat goats category sponsored by Jim and Renee Williamson. She is the daughter of Scott and Robin Webb of Bowman.

Sarah Allen won the food fast and fit category sponsored by the M.K. “Curly” Cook family in memory of Sandra B. Cook. She is the daughter of Joe and Frances Allen of Blue Ridge.

Oakley Perry won the fruits, vegetables and nuts category sponsored by the Meadows-Knox Family Fund. He is the son of Jennifer White of Hazelhurst.

Donnie Pulliam won the human development category sponsored by the Georgia Association of Extension 4-H Agents. He is the son of Donnie Pulliam and Monica Robertson of Aberdeen, Miss.

Kayla Jenkins won the food fare category sponsored by the Georgia Development Authority. She is the daughter of Emily Singleton of Ludowici.

Camilla Summerford won the environmental science category sponsored by the Georgia Cooperative Council, Inc. She is the daughter of Doug and Kathy Summerford of Valdosta.

Claire Woodard won the beef category sponsored by Jim and Renee Williamson. She is the daughter of James and Janet Woodard of Madison.

Will Holder won the power and energy category sponsored by Mike and Karen Garrett. He is the son of Jesse and Joan Holder of Covington.

Bryce Shackleford won the performing arts-other category sponsored by Greg and Becky Price. He is the son of Shonda Justus of Rabun County.

Karissa Peachey won the food safety and preservation category sponsored by Gary and Rhonda Kaye. She is the daughter of Mark and Marlene Peachey of Doerun.

Tiffani Alexander won the entomology category sponsored by the University of Georgia Cooperative Extension Service Entomology Department and the Georgia Pest Control Association. She is the daughter of O’Neal and Inetta Alexander of Covington.

Sara Johnson won the international category sponsored by the Georgia 4-H Foundation and Mrs. Eleanor I. Smith. She is the daughter of Carroll and June Johnson of Tifton.

Tineke van Loenen won the poultry and egg science category sponsored by the Georgia Poultry Federation. She is the daughter of Paul and Lorei van Loenen of Sandersville. 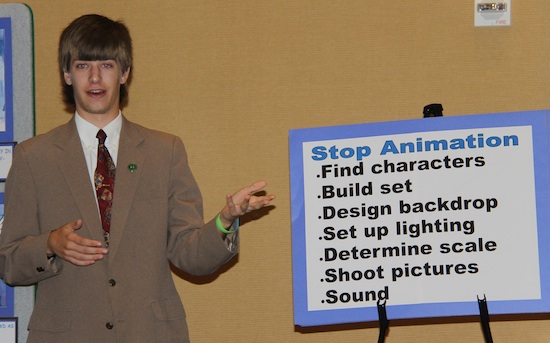