When it comes to choosing fruit, most people reach for the biggest piece. Titan™, a new blueberry variety bred by a University of Georgia scientist, makes that an easy task. It produces berries two to four times the size of average blueberries.

“People like big strawberries and big blackberries. Now they can get big blueberries,” said Scott NeSmith, the UGA College of Agricultural and Environmental Sciences researcher who bred the new variety.

The UGA Research Foundation has applied for a plant patent for Titan™.

For commercial and homeowner use

Titan™ was designed for both commercial and homeowner use. NeSmith says backyard growers will like the berry size and so will visitors at pick-your-own farms. “Common sense tells you that picking blueberries by hand takes a long time. Not with Titan™,” he said.

Average blueberries are usually a little smaller than a dime. NeSmith has seen Titan™ berries grow as large as a quarter. A rabbiteye blueberry, Titan™ is well suited for growing in Georgia and produces well in USDA hardiness zones 6a through 9a.

Released in 2012, Titan™ hasn’t been added to Georgia blueberry farmers’ fields yet, but it is available in limited supplies for homeowners.

“Right now, most nurseries have waiting lists for Titan™ plants. That’s how popular it is,” Nesmith said. “They have more orders than they do plants.”

He encourages homeowners to contact their local garden center and request the variety. “If enough people ask for it, hopefully the big box stores like Lowe’s and Home Depot will start carrying it,” NeSmith said.

No matter which blueberry variety you add to your home landscape, Nesmith says to set aside the first year as a growing year for the plant. “You may see a small amount of fruit the second year, but the third year will bring a good blueberry crop,” he said.

While some varieties are self-fruiting, NeSmith advises planting two or more varieties to insure good pollination and fruit set. Two additional homeowner varieties that have been recently released are Summer Sunset™ and Blue Suede®.

Based on the UGA campus in Griffin, Ga., NeSmith has been researching blueberries in Georgia since 1990. He was recently awarded the UGA Inventor’s Award for his research efforts that include the release of 10 new patented commercial blueberry varieties and two patented ornamental blueberry varieties. The award is presented each year by the UGA Researrch Foundation to recognize an inventor for a unique and innovative discovery that has impacted the community, state and/or world. UGA-developed blueberries are grown around the world on all continents except Antarctica.

Blueberry production has surpassed peaches as the No. 1 fruit crop in Georgia. “Nationally, we may be close to number one in acres now, and we are second or third in production,” NeSmith said. Georgia farmers use about 21,749 acres for blueberry production, and the farm gate value was more than $254 million in 2011, according to the Georgia Farm Gate Value Report.

For more information on how to add blueberry plants to home landscapes, visit the UGA CAES publication website at caes.uga.edu/publications. 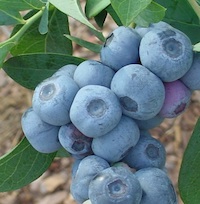