Georgia is already one of the world’s top exporters of poultry, timber and nuts, like pecans and peanuts. As Georgia farmers move into the international market, global demand, supply and weather patterns have more of an effect on the way they do business.

“We are becoming the bread basket of the world,” said University of Georgia College of Agricultural and Environmental Sciences Dean J. Scott Angle. “But to be the breadbasket of world we have to be able to get the food out of Georgia to the people who want to buy it."

“This is the right thing to do, to feed a hungry world — to feed people who need what we can produce. It is certainly a humanitarian effort, and it’s something that we have a moral obligation to do, but it’s also an economic opportunity.”

As more of the world begins to earn a middle class wage, the worldwide market for Georgia’s poultry, beef and highly sought after snacks — like pecans — is growing. Economists discussed Georgia’s growing export strength at a series of Georgia agricultural forecast meetings held over the past week in locations across the state.

They believe tapping these new markets is the key to growing Georgia agriculture, which is already the largest industry in the state and in two-thirds of Georgia’s 159 counties.

One in three acres planted in the U.S. is grown for the international market. The relatively weak dollar will also help fuel exports throughout 2013.

While agriculture’s long-term future may be dictated by growing global markets, the 2013 growing season in Georgia depends on whether the Midwest breaks free from the drought that ravaged its croplands last year.

“You don’t need an economist this year to tell you what will happen. You just need someone who can tell you whether or not it’s going to rain,” said Curt Lacy, a CAES Extension economist.

With grain stocks dwindling because of the 2012 drought, prices for corn, wheat and soybeans are up. While Georgia farmers aren’t known as large grain producers, they will be taking advantage of these prices.

Rising prices for poultry and beef should ease the increase in feed prices for animal producers, while row crop producers should benefit directly from increased grain prices.

Most farmers will shift land production away from peanuts. Farmers planted near record acres of peanuts in 2012 and experienced record yields, producing a glut of peanuts that will drive down the price until the market can absorb the surplus.

Peanut exports are expected to rise by 50 percent because of the surplus and the weak dollar, making them affordable for the rest of the world.

Cotton prices will be dictated by world cotton stocks, and whether Chinese cotton traders decide to retain or sell their large stockpile of cotton. If they hold on to their cotton, prices will remain stable at between 75 to 85 cents a pound. If they sell stocks, prices could sink to between 65 and 75 cents per pound.

With grain prices high and hay in short supply last year, ranchers in the Midwest and parts of Georgia sold off parts of their cattle herds. Therefore, the number of cattle is expected to stay low in 2013. Despite expanding international demand for beef and relatively short supplies, beef prices should stay fairly stable in 2013, but expect a sharp rise in 2014.

Milk prices will stay at 2012 levels or rise slightly, depending on the price of grain throughout the year.

Poultry companies are expected to place slightly more broiler chicks in production in 2013, but supplies will be kept stable enough to maintain slightly higher prices. Broilers should go for between 90 and 96 cents a pound this year, up from about 86 cents a pound.

For more details about the agricultural outlook for Georgia in 2013 visit georgiaagforecast.com. 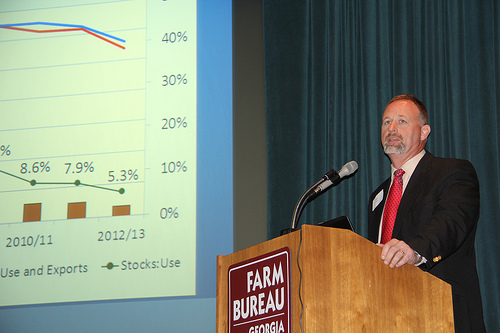 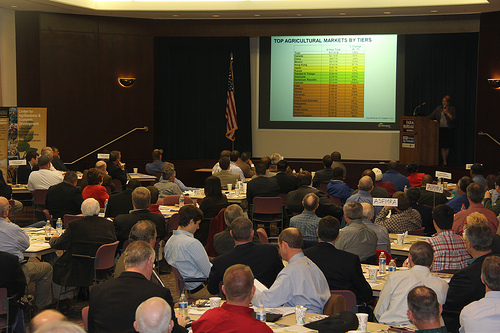