PRIDE, Parents Reducing Injuries and Driver Error, is one of five programs selected for inclusion in a new national publication highlighting innovative programs that are effective in reducing teen driver crashes.

PRIDE was developed in 2003 by the Georgia Traffic Injury Prevention Institute, a grant-funded program in the University of Georgia College of Family and Consumer Sciences, in cooperation with the Georgia Governor’s Office of Highway Safety, driver education professionals, law enforcement officials, parent-teacher associations and students.

The program is a no-charge, two-hour course that addresses the driving attitudes, knowledge and behavior of parents and teens, according to Frankie Jones, who is director of the Georgia Traffic Injury Prevention Institute.

Unlike most programs, parents and children participating in the PRIDE program go through two separate courses. After the first 15 minutes, parents and teens divide into groups before coming together again for the final segment. The result is more candid discussion in the two separate groups as well as when they rejoin, Jones said.

“Much of the discussion in the parents’ group centers on Georgia’s graduated driver’s license laws and how parents can influence their teens to become safer drivers,” she said. “But we also ask them to rate their own driving. And we ask the teens to rate their parents’ driving. When the two groups come back together, the parents and teens share their views about this, which generates a lively and significant discussion.”

In their discussion, the teens primarily focus on identifying what is most important to them, using a series of exercises to narrow the list to their top three, which generally end up including family, life and friends. At the end of the session, teens are asked to take the “Driving Force Oath,” which includes a pledge to always wear safety belts, to always obey driving laws and to practice safe driving.

“The pre- and post-test results show that both the parents and teens significantly increase their knowledge of the graduated driver’s license laws and their intent to drive safely,” Jones said. “We also survey the parents at sixty-day and one-year intervals. Respondents to these surveys indicate that there has been a very low incidence of crashes or violations involving their teens.”

PRIDE reaches about 1,200 families a year. In most cases the parents and teens are attending voluntarily. However, Jones noted, juvenile court judges do sometimes mandate that teens and their parents participate if the teen has committed a traffic offense.

“We’ve found that the parents whose teens were required to come are more likely to stay at the conclusion of the program to talk with the instructor and other parents,” Jones said. “We’re also finding that as judges receive information about PRIDE through continuing education conferences, more of them are offering PRIDE participation as an alternative to sentencing.”

Two of the reasons PRIDE has been successful in helping parents and teens are its reliance on proven parenting education strategies and the high standards set for the program’s volunteer instructors, which include police officers, emergency medical service providers, fire fighters and driving school instructors.

These volunteers must complete nine hours of training, which includes seven hours learning about PRIDE; the Georgia Traffic Injury Prevention Institute and Georgia’s Teenage; and Adult Responsibility Act. Instructor training also includes practice in presenting the programs followed by a final exam and two hours of observation. To remain certified, instructors must teach at least four PRIDE classes per year and either attend a three-hour training or complete an online course. 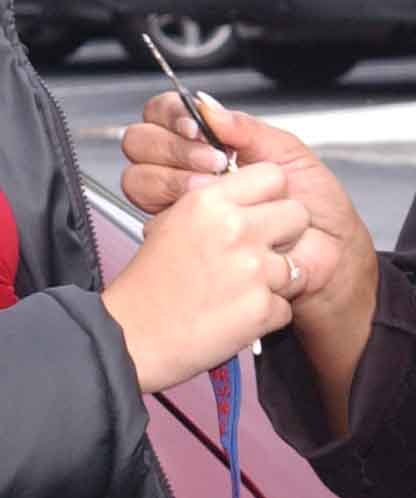