Oil and water may not mix, but a University of Georgia study has found feeding chickens a blend of plant-based oils in their drinking water can help prevent salmonella contamination before the meat reaches the dinner table, or even the grocery store.

Salmonella is a bacterium that causes an estimated 1 million cases of foodborne illness in the United States each year, said Walid Alali, a food safety scientist with the UGA Center for Food Safety in Griffin, Ga.

“Each year some 20,000 people will go to the hospital and close to 400 will die due to salmonellosis,” Alali said.

Usually, symptoms last four to seven days and most people get better without treatment. But salmonella can cause more serious illness to older adults, infants and those with chronic diseases. Poultry is a common source of salmonellosis, as are eggs, raw sprouts and unpasteurized juices, but proper cooking and pasteurization kill salmonella. A major outbreak in 2011 was linked to ground turkey that infected close to 136 people in 34 states. In 2009 almost 400 people in 42 states were sickened after eating contaminated peanut butter.

In this study, published in the October issue of Food Control, he tested the effectiveness of adding a blend of oils to poultrys’ water source. The product, Mix-Oil, is a highly concentrated blend of essential oils from thyme, eucalyptol and oregano developed by the Italian company Animal Wellness Products. Mix-Oil has been on the market since 2004 and is used for all animal species, including commercially raised fish.

On a farm in Athens, Ga., Alali compared Mix-Oil to two organic acids traditionally used in the poultry industry to reduce the amount of salmonella the chickens carry. Currently farmers control salmonella in their flocks by administering vaccinations, “probiotics — a cocktail of good bacteria that compete with bad bacteria — and by adding acids to their drinking water,” Alali said.

“These extracts come from plant material, and they have antibacterial qualities. They have the ability to kill pathogens – we just have to come up with the right blend,” Cristofori said.

The UGA study found the chickens that were fed Mix-Oil in their water had higher weight gains, a lower feed conversion rate and lower mortality rate. They also drank as much water as they did before the Mix-Oil regimen and more water than chickens that were given lactic acid to prevent salmonella.

“Chickens consume less water when one of the organic acids, lactic acid, is used because they don’t like the taste of it,” Alali said. “It can also inflame the chicken’s intestines and, over time, it can damage the farm’s water pipes.”

Mix-oil reduced salmonella contamination in the chickens just “as well as lactic acid, and it improved the performance of the chickens,” he said.

Salmonella typically collects in two chicken organs; the crop and the ceca. The crop is located at the base of the esophagus and the ceca is part of the large intestine.

The UGA study also looked at the salmonella frequency in these organs. There was less salmonella in the crop of the chicken flock that consumed Mix-Oil, but the levels remained unchanged in the ceca.

Helping from the farm to the fork

In a second study, Alali searched for the best concentration level of Mix-Oil. “The concentration means money, and how much you add results in a cost to the farmer,” he said. “Poultry producers are always concerned over how a treatment is going to affect their birds and how much it’s going to cost them.”

The UGA research project shows Mix-Oil costs around $500 per 20,000-bird chicken flock to control salmonella in chickens and improve performance. Next the researchers will test Mix-Oil on a commercial poultry farm.

“We have proven the concept, now we have to take this to the commercial level and see how it performs on an actual farm,” Alali said. “We are trying to control salmonella in the poultry industry both at the preharvest level, on the farm and at the processing plants. This is what we call farm to fork control. The industry does its job and grocers and consumers control what happens after that.

CAES News
UGA-Griffin students celebrate their multicultural campus community Posted on 05/13/22 by Jennifer L Reynolds
Nestled on what was once a Georgia experiment station, the University of Georgia Griffin campus has evolved since those early days to embrace a multicultural, international community of researchers from all across the globe. 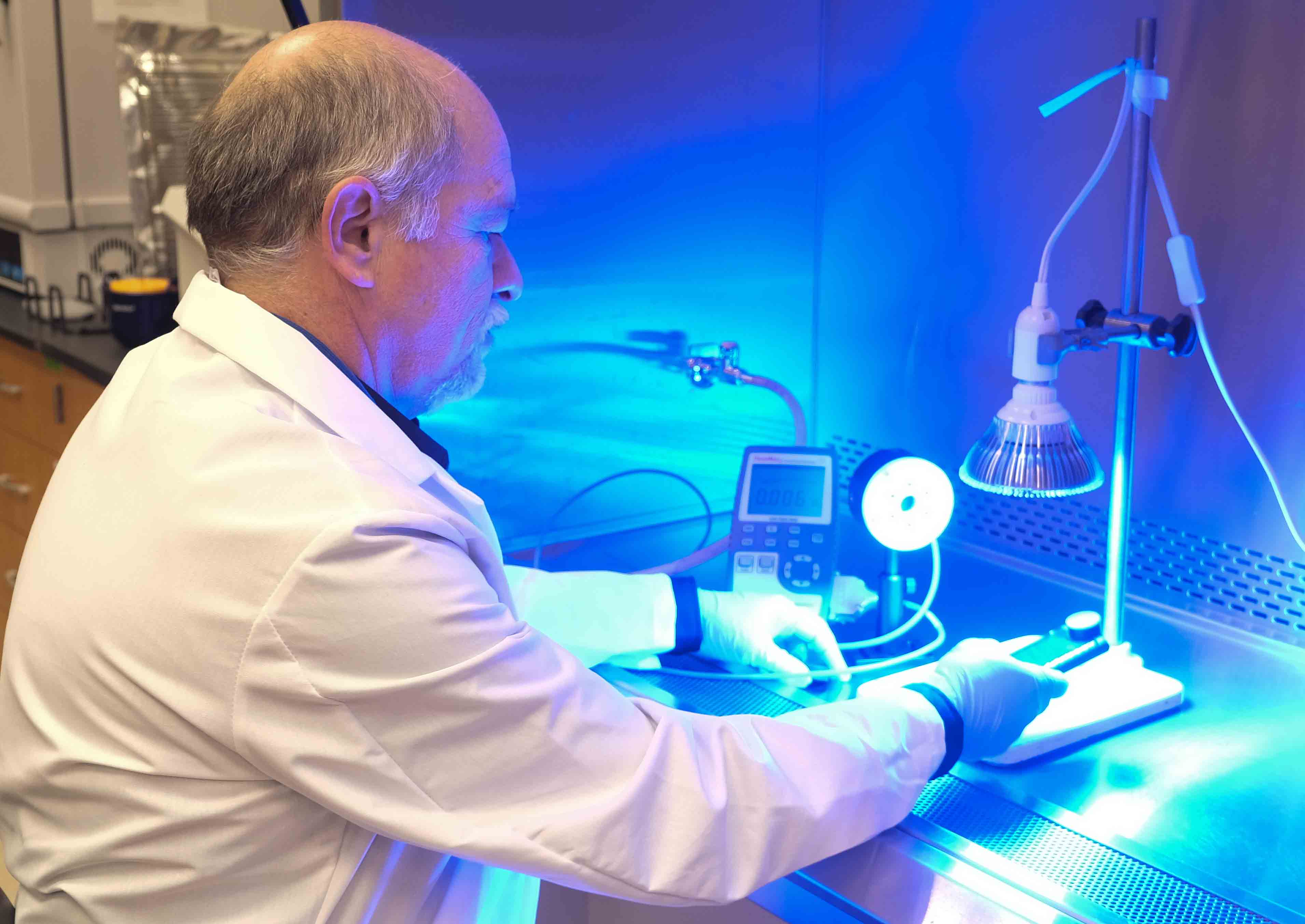 CAES News
UGA researchers study the use of blue light technology to reduce foodborne outbreaks Posted on 04/27/22 by Jennifer L Reynolds
Researchers from the University of Georgia Center for Food Safety (CFS) are beginning a new study to investigate the effectiveness of antimicrobial blue light (aBL) technology on reducing foodborne pathogens.