The University of Georgia College of Agricultural and Environmental Sciences honors faculty and staff service with 2012 D.W. Brooks Awards

The University of Georgia College of Agricultural and Environmental Sciences has recognized staff and faculty who have demonstrated excellence in the college’s teaching, research and Extension missions with the annual D.W. Brooks awards and lecture series.

“Each year we are reminded just how outstanding the faculty in our college are when we review these award nominations,” said Dean J. Scott Angle of the College of the Agricultural and Environmental Sciences. “That excellence is clear across all missions of our college, exemplifying the commitment and innovative spirit D.W. Brooks brought to this college and to agriculture.”

This year’s award winners were honored at a ceremony on Oct. 2 at the University of Georgia Center for Continuing Education.

The annual awards are named after D.W. Brooks, who graduated from the College of Agricultural and Environmental Sciences in 1922. Brooks founded the agricultural firm Gold Kist, Inc. while serving as a professor of agronomy at the college. He also founded Cotton States Insurance Company.

The administration of the College of Agricultural and Environmental Sciences established the D.W. Brooks Faculty Awards for Excellence in Teaching in 1981 to recognize faculty members who made outstanding contributions to the college’s teaching mission. In 1983, administrators expanded the awards to include research, Extension and county Extension programs. An award for international agriculture was added in 1988.

Traditionally, the awards ceremony is held in conjunction with the college’s signature D.W. Brooks Lecture, but this year the lecture will be held separately on Nov. 8. The 2012 World Food Prize Laureate Dr. Daniel Hillel will give the upcoming lecture.

Hillel developed and championed highly efficient irrigation technologies that allowed farms to flourish across Africa, Asia and the Middle East. In 2012 the World Food Prize Foundation recognized him for his contributions to sustainable irrigation practices and global food security.

This year’s D.W. Brooks Award for Excellence winners are:

James Epperson, D.W. Brooks Award in Teaching:Epperson, professor of agricultural economics at the college’s Athens campus, teaches and conducts research on agribusiness topics. He has been recognized six times by the Agricultural and Environmental Economics Club, and has served as the department’s graduate coordinator.

Monique Leclerc, D.W. Brooks Faculty for Excellence in Global Programs: Leclerc, atmospheric scientist and University System of Georgia Regents Professor, came to UGA in 1995 to create the Laboratory for Environmental Physics. Her Griffin-campus-based laboratory conducts research into climate change and biogeoscience. With more than 150 peer-reviewed papers and book chapters to her name, she ranks as one of the most cited authors in her field.

Brian Tankersley, D.W. Brooks Faculty Award for Excellence in Public Service Extension: Tankersley, Tift County Extension coordinator, organizes the outreach and support services for that county’s $150 million agricultural industry. In addition to improving farmers’ crops, he has also worked to help improve the market for their crops — helping to found the farmer-owned Tift Quality Peanuts Shelling and Storage Cooperative. He has also coached five 4-H teams that have gone on to win national titles.

Albert K. Culbreath, D.W. Brooks Award for Excellence in Research: Culbreath, a professor of plant pathology at the college’s Tifton Campus, began working at UGA in 1989 and has since established himself as a leader in the area of ecology, epidemiology and control of thrips and tomato spotted wilt virus. He is also known for his work with quantitative and ecological epidemiology and integrated management of foliar fungal diseases of peanuts. He has co-authored over 140 peer-reviewed journal articles and book chapters and has co-developed four cultivars of peanut plants.

Robert Kemerait Jr., D.W. Brooks Award for Excellence in Extension: Kemerait, an associate professor of plant pathology at the college’s Tifton campus, joined the University of Georgia Department of Plant Pathology in 2000 as an Extension researcher and specialist. His work focuses on managing disease and nematode problems in peanuts, cotton, corn and soybeans. Highlights of his career have included the development of “Peanut Rx,” a risk index for peanut diseases and the development of set recommendations for controlling nematodes affecting cotton. He has worked in Guyana and Haiti helping to lead the Peanut Collaborative Research and Extension Program sponsored by the United States Agency for International Development.

Unessee Hargett Jr., D.W. Brooks Diversity Award for Staff: Hargett, who serves as a research coordinator for the Department of Plant Pathology at the college’s Tifton campus, started work with UGA in August 1984. Since 1995, he has worked with hundreds of elementary school students in Southwest Georgia to develop school gardens to help support the national Plant a Row for the Hungry program. The program has taught students important lessons in biology and agricultural awareness, but has also allowed them to donate their crops to local food banks and homeless shelters.

Leticia S. Sonon, D.W. Brooks Diversity Award for Faculty: Sonon serves as the program coordinator for the Soil, Plant and Water Laboratory at the University of Georgia Agricultural and Environmental Services Laboratories. After spending 23 years in various environmental laboratories, Sonon started at UGA in 2004 and has established herself as a leader in soil, plant and water testing. In addition to her supervisory role at the lab, she is involved in various projects at the local, national and international levels that encourage diversity of the workforce and the improvement of global food security.

The VISTA Program, D.W. Brooks Unit Award for Diversity: The Volunteers In Service To America program, a grant-funded partnership with the Corporation for National and Community Service, has been a part of Georgia 4-H since July 2010. Through AmeriCorps’ VISTA program, Georgia 4-H recruits college-educated workers from a variety of backgrounds to serve with the program. So far, VISTA volunteers have raised more than $200,000 to help support 4-H programming since 2010. The five current Georgia 4-H VISTA members are: Capri Martinez and Dominique Butler in the state office; Cindy Edwards in Calhoun County; Janelle Jelks in Colquitt County; and Kassie Love in Houston County. Laura Perry Johnson, southwest district Extension director, and Jeff Buckley, state Extension 4-H specialist, serve as the program’s supervisors.

Ryan Crowe, D.W. Brooks Classified Staff Award for Excellence, Skilled Trades Category: While Crowe was at the University of Florida pursuing his bachelor’s degree in animal science, he also worked in the meat department at his local Publix. He brought both his degree and his knowledge of the art of animal processing with him when he joined the University of Georgia’s Meat Science Technology Center in Athens as the meat lab manager in 2002. Since coming to the UGA, Ryan has expanded the operations of the facility to include increased research activities and projects, expanded hands-on class labs, numerous outreach and Extension programs, hosted annual state and district meat judging contests and expanded the retail sales market.

Pamela Brown, D.W. Brooks Classified Staff Award for Excellence, Administrative or Professional Category: Brown, an administrative manager, joined the Department of Crop and Soil Sciences in 1994 and now assists the department head in managing 45 faculty and 60 temporary and classified staff at three locations. Her responsibilities include handling all personnel issues, information technology and computer support, departmental reporting, faculty appointments, promotion and tenure, award and review processes, as well as ensuring the department is in compliance with university policies and procedures.

Donna Tucker, D.W. Brooks Classified Staff for Excellence, Technical Category: Tucker has worked in various University of Georgia laboratories since 1977. For the last 21 years, she has worked as a research assistant in Dr. Wayne Parrott’s lab in the Institute of Plant Breeding, Genetics and Genomics, a part of the College of Agriculture and Environmental Sciences’ Athens campus. Her main focus in the lab is on soybeans. She is responsible for the initiation and maintenance of tissue culture and the transformation of soybeans with desired genes. She has helped introduce insect resistance and carotenoid production traits into soybean varieties. She is currently working with nematode resistance and other value added traits. 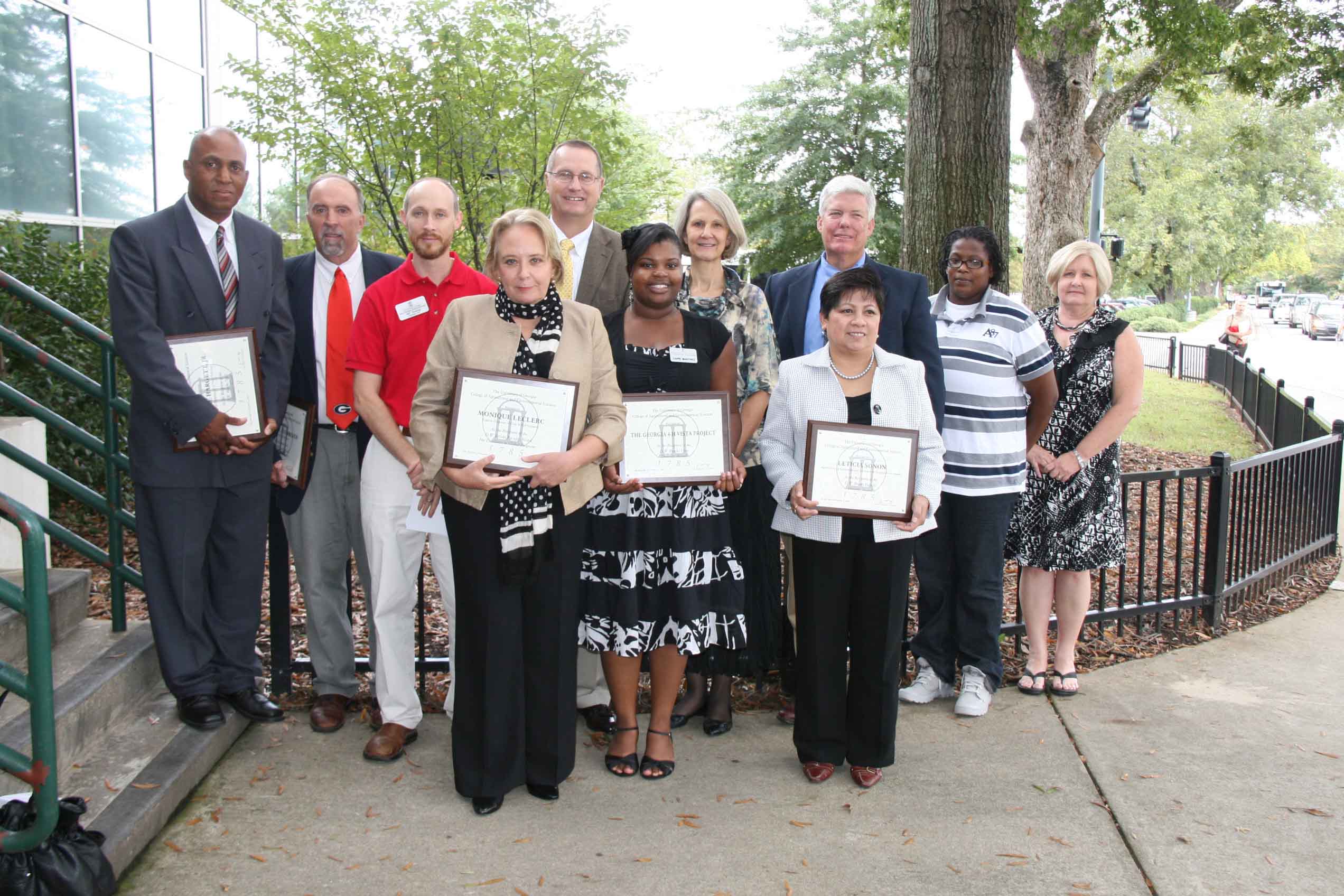 CAES News
Incorporating alfalfa in forage systems could lead to environmental benefits Posted on 12/09/21 by Maria M. Lameiras
Alfalfa, once a dominant forage in Georgia, is the third-highest crop for economic returns in the United States. Combined with cheap nitrogen prices, difficulty growing the desirable forage crop in Georgia’s challenging climate led to a decline in alfalfa production in the state after its peak in the 1960s.
Subscribe for Updates