The genome mapping effort involved more than 300 researchers working at universities and research institutes in more than a dozen countries. A team from UGA worked under the guidance of Andrew Paterson, a Regents Professor of plant breeding and genetics. They spent the past two years looking into the evolutionary history of the tomato’s genome—trying to find the place where the tomato split from its flowering plant forbearers.

Dubbed the Tomato Genome Consortium, the researchers involved in the project published their findings in the May 31 edition of Nature.

“This project combined fundamental insight into flowering plant evolution, in particular the first case known of a lineage that experienced consecutive genome triplications, with application-oriented work such as the discovery of many genes likely to contribute to breeding better tomatoes,” Paterson said.

Paterson’s team, who represent both the UGA College of Agricultural and Environmental Sciences and Franklin College of Arts and Sciences, has played a pioneering role in a period of discovery of duplications and triplications of gene sets in the genomes of many of the world’s leading crops and botanical models. Repetition of the gene set has been important in the worldwide spread of flowering plants and in the evolution of crops—providing "spare" genes that can evolve new traits while the plant also retains the traits prescribed by its original set of genes.

The tomato and its relatives, which include the potato, have gone through this process not once but twice, Paterson’s team found. It’s the first known case of two consecutive triplications of an original set of genes.

Identifying the changed genes in each of these triplicated gene sets will help researchers pinpoint which genes control the characteristics that make a tomato a tomato—things like fruit size, flavor and texture.

Paterson, who was recently recognized for his work sequencing sorghum and cotton, had studied tomatoes during his post-doctoral work. His team joined the Tomato Genome Consortium in 2009.

Researchers on the tomato genome project focused on fully understanding the sequence of one tomato variety, Heinz 1706. This sequence can now be used to more fully decipher the genetic makeup of other tomato varieties and eventually be used to breed better tomatoes.

As a part of the effort, researchers compared the Heinz 1706 genome to the genome of one of the tomato’s wild ancestors as well as to the potato genome. They found only a 0.6 percent divergence between the genetic information contained in the wild and modern tomato varieties, but found about an 8 percent divergence between the potato and tomato, according to the article published in Nature.

Those points where the genetic information diverges, Paterson said, are clues to changes that may explain why one plant makes potatoes and another tomatoes. 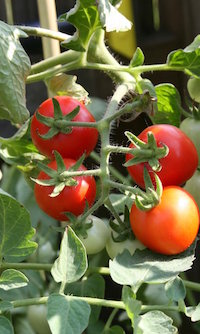