Spring 2012 hits the record books as one of the warmest

Weather conditions in May continued this year's trend of above-normal temperatures in Georgia with some areas seeing higher than normal rainfall and other areas still experiencing drought conditions.

Rainfall across the state varied from 25 to 500 percent of normal due to the ongoing severe drought coupled with the rainfall contributions of Tropical Storm Beryl at the end of the month near the Georgia coast.

The warm winter and spring temperatures led to a 25 to 35 percent drop in peach production, since Georgia’s orchards need a certain number of chill hours to produce a full crop. Late-blooming varieties were particularly hard hit. However, the peaches that were harvested were of good quality and were quickly shipped to market.

Rainfall across Georgia varied widely in May due to several storms that passed through the state, including Tropical Storm Beryl in late May.

The highest monthly total precipitation from National Weather Service reporting stations was 7.48 inches in Savannah (4.50 inches above normal), and the lowest was in Macon with only 2.11 inches (0.61 inches below normal).

The highest monthly amounts were generally within 100 miles of the Georgia coastline, in the area covered by Tropical Storm Beryl at the end of May. The areas with the least rainfall were in central Georgia where exceptional drought conditions suppressed thunderstorm development.

The highest single-day rainfall reported by a Community Collaborative Rain Hail and Snow Network Station was 4.01 inches in north-central Georgia near Dahlonega in Lumpkin County on May 7. The second highest daily total was 3.81 inches reported at Kingsland in Camden County on May 29.

Severe weather was reported on 11 days in May. No tornadoes were reported, but there was significant damage to crops from reported hail this month.

The most severe crop damage came on May 22 in parts of Berrien, Colquitt, Cook, Tift and Worth counties, where a swath of hail up to 40 miles wide fell and covered the ground in drifts up to 6-feet-high. The hail fell in the middle of the harvest season for a number of field crops, including hundreds of acres of watermelon. Wind damage caused scattered power outages during the month, and there were a number of house fires reported due to lightning strikes.

Beryl was the strongest tropical storm observed along the Atlantic Coast in May in over 100 years, with winds of up to 70 mph as it came onshore just south of the Georgia-Florida border. The storm caused strong rip currents, flooding and high winds, which cut power to thousands of people along the coast.

Beryl did reduce vacation travel in coastal communities over the Memorial Day weekend, but no estimates of losses due to reduced tourism were available at the time this report was written.

Drought conditions in May stabilized due to intermittent showers across the state and a lack of extended hot spells. Farmers reported that timely rain was sustaining crops in some places, while other areas remained dry. A few farmers reported difficulty getting into the fields due to wet conditions near the end of the month, especially in areas that were affected by Beryl. In dry areas, farmers were continuing to feed hay to livestock due to lack of growing pastures and reported problems with insects. 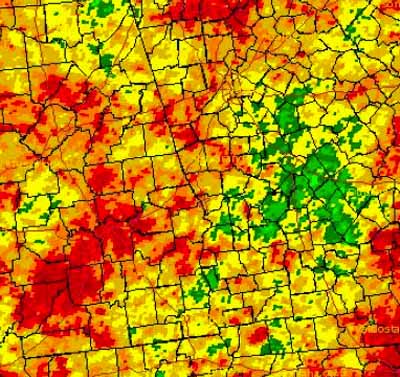 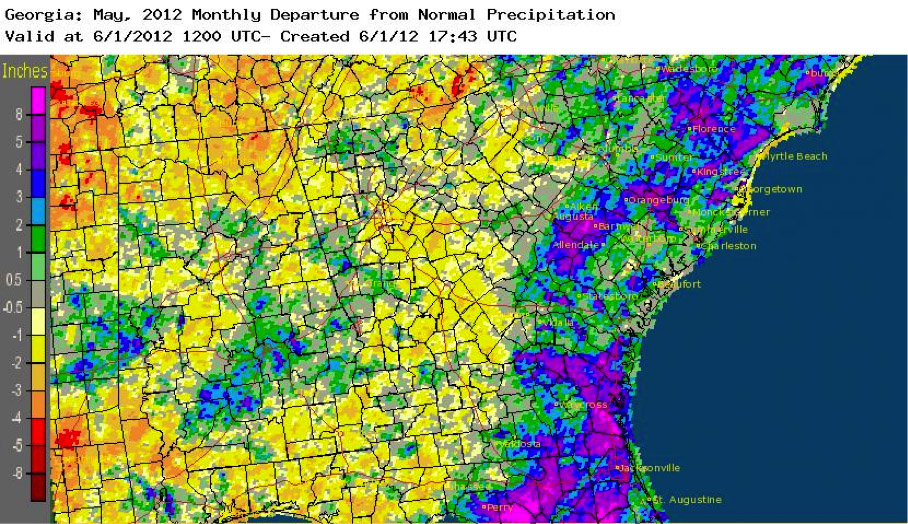