The squash vine borer: A difficult but manageable garden pest

You can have tomatoes, peppers and cucumbers galore; but no backyard garden is complete without summer squash.

With broad leaves and multiple sunny blooms, the plant is a lovely sight, especially as the first glossy fruits begin to form on the pollinated flowers.

But many home gardeners find their plants literally collapse overnight — doomed by the dreaded squash vine borer — the scourge of squash-lovers everywhere.

“In the past when I’ve tried to grow squash, they get big, and you have beautiful plants,” Krissy Slagle said. “And then you come out and they’re wilted.”

Slagle is the assistant program coordinator of the Georgia Master Gardener program and an avid gardener.

Squash vine borers overwinter in cocoons in the soil, usually in areas where squash or zucchini plants were grown the previous season, said Amanda Tedrow, a University of Georgia Cooperative Extension agent in Athens-Clarke County. Once the adult moths emerge from the soil, they lay eggs on the stems of susceptible plants during the day.

After about a week, the pale grubs hatch and eat their way into the stems near soil-level, leaving a crumbly mess of frass behind. Eventually, as water flow is cut off, the plant wilts and dies.

There’s a conventional wisdom among vegetable gardeners that vine borers can’t be defeated. You just don’t know they’re present until it’s too late. Once they’re inside the stem of the squash plant, there is not much that can be done.

But that kind of thinking sticks in Slagle’s craw.

“Everybody says, ‘Oh, you can’t do anything about it,’” Slagle said. “And I thought, you know, that doesn’t sound like the right answer to me.”

In previous years she’s tried to get around the bugs by mounding dirt over the stem at a spot on the vine ahead of the larvae. With the right water and temperature, theoretically, the squash will reroot, and the infested part of the plant can be severed and removed.

But Slagle said sometimes the larvae “eat faster than what she can cover.” And the plant is already too compromised or too stressed by heat to survive.

Although she hasn’t used it yet, Slagle’s got another trick up her sleeve: row covers.

With good contact with the ground, row covers can give a squash crop a significant head start over the vine borers. Row covers are lightweight commercial garden fabrics that drape over frames or the plants themselves. They can offer protection from frost, intense heat and pests.

After the first female flowers appear, the row covers should be removed to allow for pollination. The vine borers may still affect the crop, but by that time production — and squash casserole — is right around the corner.

There are other methods to control vine borers, with varying results.

Gardeners can make a vertical slit in the stem with a sharp knife and manually remove the larvae. One plant can house several. Afterward, soil should be mounded over the stem to encourage rerooting.

Yellow sticky traps and yellow-colored bowls of soapy water can be used to trap or drown the adult orange moths, which are attracted by the yellow squash blossom.

Some gardeners even inject the insecticide Bt, or Bacillus thuringiensis, into the squash stems. But contact insecticides are generally not effective, as the larvae are protected inside the plant.

Getting ahead of the game

The most successful ways to control squash vine borers might be the simplest ones.

Gardeners should start their squash as early as possible so that they’re already harvesting from strong, healthy plants before the six to eight summer weeks when vine borers are active.

“I sometimes plant so early that I may at times have to cover seedlings with a bucket if there is a frost warning,” said Lisa Ames, an entomologist with the UGA College of Agriculture and Environmental Sciences.

Ames, who no longer grows zucchini due in part to vine borers, has turned to an alternative squash variety called snake gourd or Cucuzza. It is readily available and resistant to vine borers.

Last but not least, the industrious gardener, who refuses to go a year without fresh homegrown squash, can simply plant more than vine borers can stomach.

There’s bound to be something left over.

After all, Slagle said, “You can only eat so much squash." 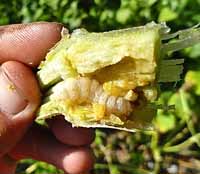 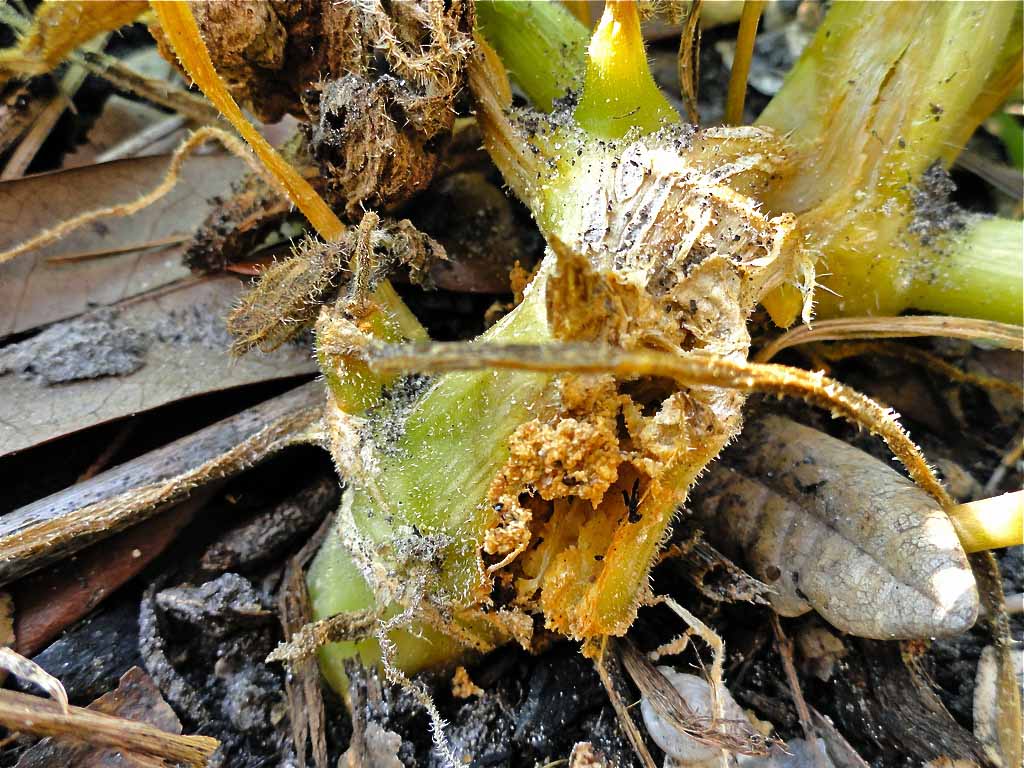 CAES News
Joro Watch engages citizen-scientists to study future of Joro spiders 09/26/22 Jordan Powers
They have been described as palm-sized, parachuting creatures with the potential to spread up the East Coast. Now dozens of webs are appearing in trees, on fences and in gardens around the Southeast, and social media and neighborhood message boards are buzzing with Joro spider sightings. Discussions of eradication methods ranging from chemical sprays to “Joro sticks” — typically a broomstick or other long stick used to destroy or relocate the Joro spiders’ large, strong webs — are rampant. Joro season is undoubtedly here.

CAES News
CAES leaders cut ribbon on new irrigation demonstration site at UGA-Griffin 09/01/22 Ashley N Biles
The new irrigation demonstration site on the University of Georgia Griffin campus opened with a ribbon cutting ceremony to officially launch the site, which will be used for training, research and education on the latest irrigation technologies for industry professionals, homeowners and researchers.
Subscribe for Updates