Beard has 30 years of service with the university. For the past 17 years, he has served as the agricultural and natural resources Extension agent in Colquitt County.

His county has the largest acreage of commercial vegetables in Georgia and is the largest producer of greenhouse vegetable transplants in the southeastern United States, exceeding $400 million in annual net value.

“Glenn’s service to agricultural communities in Georgia has had a major impact in the state and beyond," said Jennifer Frum, UGA’s vice-president for public service and outreach. "He has earned a national reputation for his expertise in recognizing and identifying vegetable diseases and has become a resource for farmers and county agents across the Southeast."

Beard is the author of "Diseases and Conditions of Vegetables in Georgia: A Pictorial Dictionary." He has received international recognition for his work in China teaching concepts such as soil fertility, pH, and crop rotation to local farmers.

With 13 years of service, Prostko is responsible for the statewide weed science program in field corn, peanut, soybean, sunflower, grain sorghum and canola.

Protsko is the author of a bimonthly column titled “From the Turn-Row,” which appears in "Southern Farmer", a regional publication covering agriculture in Georgia, Alabama, Florida, Kentucky and eastern Tennessee.

“Eric is a firm believer in sharing information and data with the farming community," Frum said. "He was one of the first UGA extension specialists to formally develop an Internet-based training program for county extension agents."

A maximum of five Hill Awards are presented each year by UGA’s Office of the Vice President for Public Service and Outreach. Each recipient is judged to have made contributions to the improvement of the quality of life in Georgia or elsewhere of an order that greatly exceeds the normal accomplishments of a productive faculty member.

Beard and Prostko were presented their award during the 21st Annual Public Service and Outreach Meeting and Awards Luncheon held April 16.

Jonathan Veit is a public relations specialist with the office of the University of Georgia Vice President for Public Service and Outreach.
Authors:
Jonathan R. Veit
Experts/Sources:
J. Scott Angle 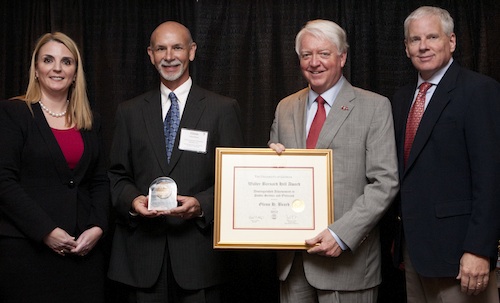 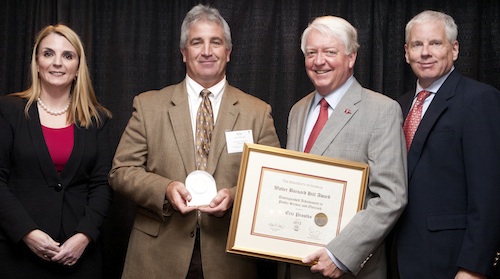 CAES News
CAES combines research and Extension efforts to develop climate solutions Posted on 11/11/21 by Maria M. Lameiras
As climate issues capture governmental and public attention — from the effects of methane emissions to weather extremes — it is incumbent on the world to take action. Experts in UGA's College of Agricultural and Environmental Sciences are focused on helping residents address climate challenges in ways that will benefit the environment and ensure both profitability and sustainability for industry.
Subscribe for Updates