Almost two years ago, a tiny immigrant pest arrived in Georgia, and there’s nothing the state’s immigration office can do to make it leave. The bean plataspid, or kudzu bug, munches on kudzu and soybeans and has now set up residence in four Southern states.

Homeowners consider the bug a nuisance. Soybean producers shudder at the damage it causes. And many are hoping it will prove to be a kudzu killer.

Last fall, Gardner had to search repeatedly to find the pest in kudzu patches in north Georgia. “Those areas are loaded with bugs this year,” he said.

By studying the pest for the past year, Gardner has determined wisteria, green beans and other legumes are the bug’s true hosts in the landscapes and home gardens. A plant becomes a true host of the insect when different life stages of the insect are found on the plant, he said.

Removing kudzu is one way to help control the pest around homes, but that’s not an easy task, especially if the kudzu is growing on your neighbor’s land.

“The bugs re-invade so quickly from nearby kudzu that a pest control operator may have to treat every other day, losing money in the process. A single call that they were paid for might turn into a half-dozen visits, five of which they’d not be paid for,” said CAES entomologist Dan Suiter. “I suspect that the pest control industry will be steering somewhat clear of kudzu bug control unless some smart pest control operator begins to market kudzu removal as part of his business.”

Having a few hundred uninvited houseguests is bothersome, but the bugs are not harmful, and they don’t feed on indoor plants.

“We found the bug caused a 32 percent reduction in kudzu growth last year in the plots we monitored,” said Jim Hanula, an entomologist with the USDA Forest Service. He monitored the bug on kudzu plots in Athens, Ga., for the past year.

This may sound like reason to celebrate, but kudzu roots can grow as deep as 12 feet and weigh up to 300 pounds, Hanula said.

“We’re hopeful that feeding by the bug year after year will deplete those roots and weaken the plants,” he said. If the bug’s effect is cumulative, kudzu plants will likely weaken, and patches won’t be as thick.

“Hopefully, the bug will reduce kudzu’s ability to climb, which would be good for forestry,” he said.

The bean plataspid also feeds on soybeans, a crop grown in Georgia for the oilseed and animal feed markets.

UGA entomologist Phillip Roberts classifies the kudzu bug as an economic pest of soybeans. When left untreated in soybean fields, the bugs reduced the crop yield by 19 percent in 2010.

The bugs don’t eat soybeans. Instead, “they have a sucking mouthpart, and they use it to feed on the main stem,” Roberts said. “This adds additional stress to the plants.”

CAES entomologist David Buntin has found that plants the bugs were eating had fewer pods and fewer seeds in the pods.

“If they fed on the pod, the bean itself, I don’t know that we could grow soybeans in Georgia,” Roberts said. “The main point is it’s a yield-limiting pest, and it’s just incredible how it has moved so quickly across the Southeast.” 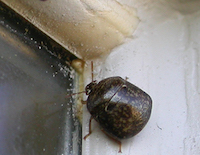 CAES News
Are your trees boys or girls — or both? Posted on 10/19/21 by Kim Coder
Female flowers and female trees produce fruit and seeds. Male flowers and trees produce pollen. Making the correct choice of tree gender can be important. Anyone who has ever smelled putrid ginkgo fruit, washed mulberries off their car or sneezed at tree pollen should understand.