Crape myrtles are true treasures in Georgia. They bloom all summer, their peeling bark is attractive, their fall color is stunning and they are tough enough to thrive almost anywhere they can get enough sun. And, they come in sizes to fit almost any spot in the landscape.

These woody perennials return year after year and provide abundant color with a minimum amount of maintenance. Crape myrtles are so well suited because they are long-lived and withstand drought after becoming established.

The crape myrtle can be planted alone or in groups, and it looks attractive with groundcover planted around it. Dark green groundcover contrasts well with the handsome bark of the tree.

It adapts well to confined spaces and is well suited for small areas close to sidewalks or parking lots. They can provide shade in deck and patio areas. The plant typically develops several main stems. The multi-trunk crape myrtles are more desirable than single stem plants in landscape plantings.

The crape myrtle is valued mainly for its long period of striking summer flowers. These showy flowers come in shades of white, pink, red or lavender. Bloom time varies depending on the variety. Large clusters appear on the tips of new branches beginning in early summer and continue into fall.

Crape myrtle flowers on new growth of the season. So, plants can be pruned anytime during the late winter or early spring before the new growth emerges without losing flower buds.

Avoid pruning in the fall before the first frost because this forces new growth and keeps the plant from going dormant. The type and amount of pruning to be done each year depends entirely on the ultimate size and shape of plant you want.

On some earlier-blooming cultivars, pruning to remove spent flowers will stimulate new growth and another flush of bloom in late summer. On cultivars that bloom after mid-July, it is sometimes difficult to force a second bloom.

The attractive, exfoliating bark peels away to expose a trunk that ranges in color from handsome shades of brown to gray. This bark is especially noticeable in the winter months when the tree is leafless.

Prune spent flowers off if your crape myrtle blooms early enough to allow time for another flush of color. By doing this, you can extend the color in your landscape for a much longer period.

William Tyson is the University of Georgia Cooperative Extension coordinator for Effingham County. 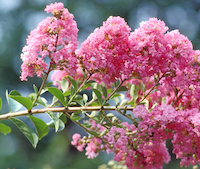 CAES News
Are your trees boys or girls — or both? 10/18/21 Kim D. Coder
Female flowers and female trees produce fruit and seeds. Male flowers and trees produce pollen. Making the correct choice of tree gender can be important. Anyone who has ever smelled putrid ginkgo fruit, washed mulberries off their car or sneezed at tree pollen should understand.

CAES News
Popular trees provide flower power but don't last the test of time 10/05/21 Paul Pugliese
Some trees naturally live longer than others but, ironically, many of the most popular landscape trees tend to be relatively short-lived. Although their flowers are quite attractive, Bradford or Callery pears are generally considered short-lived trees, and they are also highly invasive.

CAES News
Leyland cypress trees often planted incorrectly 09/22/21
Leyland cypress are one of the most commonly planted landscape trees, but poor site selection and disease pressure may soon send them the way of red tips and Bradford pears.
Subscribe for Updates