The fallen insects were piled up at the bottom of the display and at the entrance and exit to the hive. Bill Dunn, who manages the hive for the center, believed the bees collected nectar from flowers that had been sprayed or dusted with an insecticide and had inadvertently contaminated themselves with it. He expected most of the bees in the hive would die as a result.

Nectar, the sweet liquid produced by many flowers, is the major food source for bees and the raw material used to make honey. Pollen collected by the bees may also have been contaminated with insecticide. Worker bees returned to the hive carrying loads of nectar and pollen from insecticide-treated flowers and shared it with other workers, larvae and even the queen.

Bees are insects and exposure to insecticidal products can kill them. Early spring is a critical time in the life of a beehive. Warm temperatures increase activity within the hive and stimulate workers to begin foraging for food. Usually, there are few flowers to choose from in the first weeks of spring. Flowering trees such as pear, plum, peach, quince and apple do tend to produce the largest sources of nectar in the early spring.

Sometimes, particularly where fruit production is the goal, peach, plum, pear and apple trees are treated with insecticide to protect them.

Takes it back to the hive

Bees are an essential part of our ecosystem. They provide pollination to many fruit and vegetable plants. Without bees, our food choices would become severely restricted. Insecticides applied as sprays or dusts represent the biggest threats to bee populations. Many commonly used insecticides like Sevin, Malathion, Permethrin and Orthene are hazardous to bees and can remain toxic for several days after application. There are relatively non-hazardous insecticides available. They include Pyrethrum, Azadirachtin (Neem oil) and insecticidal soaps that rapidly break down by exposure to sunlight and microbes.

Use low toxic chemicals, late in the day

By following a few simple steps, you reduce the threat to bees when applying pesticides. Apply chemicals late in the day when bees are not foraging. Use chemicals with low toxicity or those that are less persistent. Spray only the target organ and avoid open flowers. Apply insecticides when there is no wind. Spray only when the target insects are active.

Beekeepers can reduce the risk of poisoning by locating hives at least 3 miles away from crops that are routinely treated with insecticides.

Stephen Garton is a retired University of Georgia Cooperative Extension Coordinator who was based in Forsyth County. 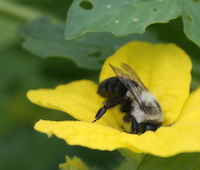