13-year cicadas ready for their day in the sun

In a few weeks, Georgians will have the chance to see a rare natural phenomenon: the emergence of Brood 19, Georgia’s only 13-year cicada.

“For 13 years these cicada nymphs have been living below ground, awaiting their day in the sun,” said Nancy Hinkle, an entomologist with the University of Georgia College of Agricultural and Environmental Sciences.

Most cicada species have multiple-year life cycles, usually two to eight years. In most cicada species, adults emerge every summer because the population is not synchronized; these are often called "annual" cicada species. In Georgia, what are called “dog day cicadas” or “July flies” sing in late summer. In contrast, periodical cicada species are synchronized, so that almost all of them mature into adults in the same year.

Brood 19 is one of several distinct broods that regularly emerge throughout the Southeast. They will arrive in large numbers later this month and into May. Thousands of them per acre are expected in some areas. They die about six weeks after their first flight.

Many can come out in a single night. Nymphs emerge when the soil temperature inside their exit tunnels exceeds 64 degrees F. According to UGA's Georgia Automated Environmental Monitoring Network, soil temperatures at the Watkinsville weather station reached 64 degrees F last year on April 4. These cicadas typically emerge earlier in southern parts of the state. To approximate their arrival anywhere in the state, use the soil temperature calculator at www.georgiaweather.net.

Estimating how many cicadas will emerge and where is tough. Habitat destruction is the biggest factor affecting cicada populations. Periodical cicadas survive underground feeding on root systems. Forested areas produce more cicadas. If trees are cut down or concrete poured over forest floors, their food source is diminished, and they don’t survive.

“It is always a toss up, if they’ve been there for a long time, there is also a chance for disease to spread amongst them and for predator pressures to exist,” Hinkle said.

Cicadas are harmless to people. They don’t sting or bite. Any injury from an accidental nibble by one would feel like a pinprick and leave no damage. Periodical cicadas are not poisonous, nor are they known to transmit disease.

They could cause damage to young trees or shrubs. If too many cicadas feed on the plant or lay eggs in the twigs, limbs may break. “The damage would be very minimal. The use of insecticides is just not justified,” she said. “The cost of the chemicals would outweigh what you might save.”

Cicadas are probably best known for their strange and sometimes piercing song, which the males make using special structures called tymbals found on the abdomen. “It is kind of hard to describe the sound; it is a buzzing, humming, singing sound that resonates throughout the forest,” Hinkle said.

Several insect species spend a long time getting ready to emerge. Butterflies live as caterpillars for months and only live a week or two with wings. Periodical cicadas have all the other insects beat, Hinkle said.

“This is pretty unusual. It is very unique to live underground for 13 years and then all emerge together, mate, lay eggs and repeat the cycle,” she said.

In 1960, UGA entomologists Preston Hunter and H.O. Lund wrote the first publication on periodical cicadas in Georgia. Hinkle wants to follow up on their reports and track the insects across the state. Report findings or send photos to insects@uga.edu.

“We’d like for people to let us know how many they are seeing and which locations are the most populated,” Hinkle said. “We’d love to track these animals when they start emerging.”

If you see a periodical cicada in the coming weeks, take a good look. Remember, you won’t have the chance to see another one until 2024. 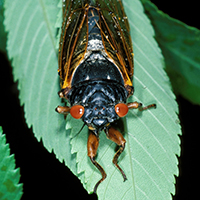