Drying is another option for storing fruits, vegetables

If your home garden “runneth over” with produce, try drying the excess as a healthy snack or nutritional addition to winter soups and sauces. A University of Georgia food safety specialist says it only takes a dehydrator and a little effort.

Many home gardeners plant a few extra vegetable plants in case insects or diseases strike their crops. When all goes well, this can lead to harvests too large for one family to consume.

“They were Roma tomatoes so they weren’t big and juicy,” she said. “I sliced them a quarter of an inch thick and sprinkled them with a little oregano. It smelled just like a pizza kitchen while they were drying.”

Andress stored the dried tomatoes in her cupboard in zip closed freezer bags and used them as a healthy snack. Dried food doesn’t have to be refrigerated because the moisture that would cause it to spoil has been removed, she said.

Tomatoes should be dried like fruits, not like vegetables, she said. Unlike vegetables, which usually require blanching before they can be dried, fruits can be sliced and placed directly in a dehydrator.

Like vegetables, tomatoes can be blanched, but they do not need to be. “If you plan to eat them in the dried form as a snack, it is better not to blanch them,” Andress said. “Just plan on eating them within several months.”

“Tomatoes, and other fruits, can still be a little flexible after drying as long as there’s no moisture left,” she said. “It doesn’t hurt to dry them a little further. Just be careful because they can scorch and burn if you dry them too long. Just ask some of my students.”

Andress said dried tomatoes can also be stored in the freezer as long as the container is free of air and moisture. To reduce inside condensation, remove the tomatoes from the container when you are ready to thaw them.

“If you are just planning to rehydrate them in a soup or stew, it doesn’t matter,” she said.

Sun-dried tomatoes sound like a gourmet dish, and in Georgia they are not an easy task to make at home. Sun drying is a process that relies on the air around the produce being very dry, Andress said.

“Our air is very humid so it’s very difficult to sun-dry,” she said.

If you try to sun-dry, use only acidic foods like fruits and never low acid foods like jerky and vegetables, she said.

Andress’s favorite foods to dry are apples, figs and pineapple. Some fruits, like kiwi, don’t work. “The slices end up shrinking so much that it’s just a mouthful of seeds,” she said.

To dry a tomato or other fruits, follow these steps:

1. Choose good quality produce. If it’s moldy, mushy or browning, throw it out.

2. Wash the fruit, and slice it evenly. (Some light-colored fruits, like apples and pears, will brown less if dipped in an ascorbic-acid solution after slicing.)

3. Place it on a tray in an electric dehydrator. If your oven can be programmed for low temperatures, you can use it. Set the dehydrator’s temperature at 140 F. Food dried at lower temperatures might never fully dry. At higher temperatures, food dries faster on the outside, which becomes hard, but leaves the inside moist and likely to rot.

4. Wait a few hours and keep a close eye on the produce as it gets nearer to the end of drying. Food close to being done will dry faster at the end than at the beginning.

5. Seal the finished pieces in freezer-weight plastic bags or in plastic storage boxes.

Follow the same steps with vegetables, except blanch them first. The only vegetables that don’t have to be blanched are onions, okra and peppers (all types).

Other foods that can be dried are meat jerky, seeds, herbs and greens like kale and collards. Foods can also be pureed and dried flat, much like Fruit Roll-Ups.

“One advantage to me of doing some of the fruits I like, like apples and pineapples, is sometimes commercially they’ve added sugars and sugar coatings to them,” Andress said. "This way, you can just have them plain.”

As a diabetic, she still has to watch how much she eats. A whole dried apple has the same amount of sugar as a fresh apple; it just has a smaller volume.

Commercially-dried banana chips often contain tropical oils and sugar, she said. “Homemade bananas will be chewier, but you can get them in their natural forms without the additives.”

Dried fruits can be mixed with nuts as a trail mix and dried vegetables make great starter for soup mix.

Drying “tends to be popular with people who do hiking and backpacking and kayaking and such,” Andress said. “A real advantage is the condensed volume, lighter weight and small storage space.” 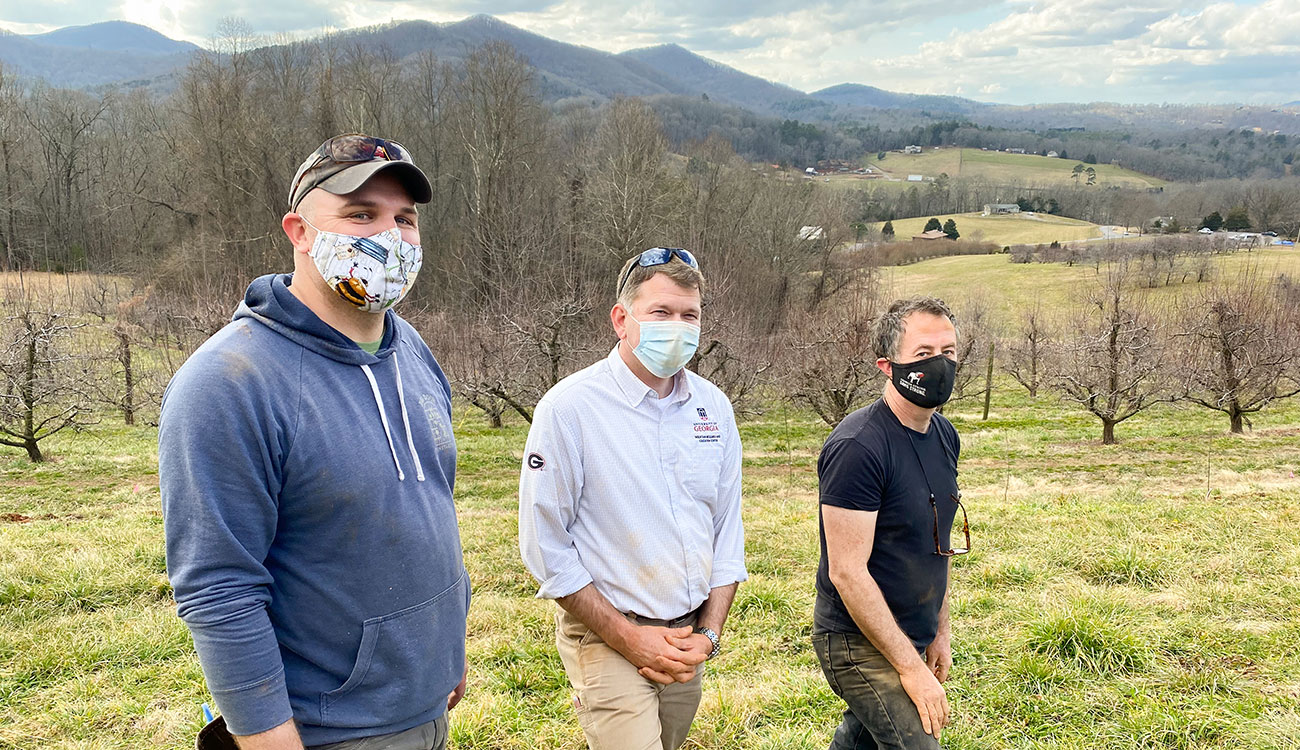 CAES News
Heritage Orchard reclaiming Georgia’s forgotten apples Posted on 03/09/21 by Michael Terrazas
The names tick off like racehorses or colors from some fancy catalog: Carolina Red June, Duchess of Oldenburg, Hewe’s Crab and Rabun Bald, Limbertwig, Nickajack, Parks’ Pippin and many more. But these aren’t paint chips — they’re apples, hundreds of varieties that thrived in orchards across North Georgia a century ago, before an evolving apple industry swept them off shelves and tables, never to return.

CAES News
Shriveled blueberries could signal “mummy berry” disease Posted on 06/30/20 by Paul Pugliese
Blueberries are one of the most popular backyard fruits for Georgia because they are relatively low maintenance compared to other fruit species. However, there is one particular disease issue known as “mummy berry” that can be problematic for blueberry growers.
Subscribe for Updates