The recession ended in spring/summer 2009, but who can tell?

The U.S. government hasn’t officially declared the recession over, but graphs put out by the Federal Reserve Board clearly show the recession ended last summer. While the recession is almost surely over for economists, most people are sure they are still in it.

What is the difference? When will the economy be better in ways we can see? The reason things still feel bad is because the recession ends when the economy hits the bottom. We will have to go up for a while before it actually starts to feel much better.

Right now is like the third day with the flu: you’re not getting worse, you might be a little better, but you still feel horrible. That is the condition of current economy: bouncing back a little, but still definitely on bed rest and very weak from the ravages of recession.

Employment has ticked up, but unemployment won’t come down much any time soon. There was no average income growth in February, although income and consumer spending have been slowly increasing for the last five months. I suspect it will probably be late 2011 or 2012 before we feel sure of the recovery and all the “worries” are behind us.

At that point, economist will say we have been in recovery or expansion mode for two years, but for most people the recovery will just start to feel real at that point.

It would take Georgia 18 months of strong job growth to bring unemployment down to more reasonable levels. After people who lost jobs get new ones, it takes them a while to pay off increased debts and re-establish enough savings to feel financially stable. The same goes for businesses that have suffered for the last two years. They need a while to regain customers and build their sales back to past levels.

The State of Georgia has cut its budget from $22 billion to about $16 billion over the last 3 years. It will probably take 2 years of moderate recovery for the state budget to recover enough for education and many other important state agencies to regain some semblance of adequate funding. Even then, we will still be nowhere near the level of state government we had in 2007.

The reality today is that there is no point in thinking about how long it will take to get back to where we were. The economic losses of this recession are permanent because they come from a permanent, or at least fairly long-term, shift in the ability to use debt to finance real estate, corporate deal making and state government expansion. When coupled with what appears to be permanently higher energy prices and enormous federal government deficits, there is no prospect for a recovery strong enough to regain the lost economic growth quickly.

Eventually our economy will be as big and strong as it was, but when that happens doesn’t really matter. We need to start looking forward from here rather than back to 2006 or 2007. We should accept that we will grow slowly from here and adjust our lifestyles and government programs to fit the current economy and the moderate growth to come.

(Jeffrey Dorfman is an economist with the University of Georgia College of Agricultural and Environmental Sciences. In Part I of his series, Rising from Recession, Dorfman explains how the recession started. In Part II he points to sure signs that the recession is over.) 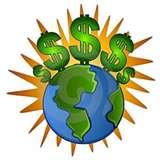