In the shadow of a rundown block building in Los Palis, Haiti, children wearing tattered clothes bit into half-ripened mangoes they picked from the ground and wondered about the strange men toiling around in the field. What they didn’t quite understand was that the agricultural experts they smiled at were there to figure out ways their parents – and one day they – could produce the food needed to combat the poverty that has long crippled their Caribbean country.

Last month, a team from the University of Georgia College of Agricultural and Environmental Sciences traveled to Haiti to assess how CAES could help develop sustainable agricultural practices there since a Jan. 12 earthquake shocked the country, crumbling its capitol and killing an estimated 200,000 people.

“Our college is not really set up to do relief work per se. We really can’t help in the immediate relief of the earthquake. But we do have the expertise to help the people here develop better agricultural systems that can produce better, more nutritious food without them being dependent upon food being sent to them,” said Steve Brown, CAES assistant dean for Cooperative Extension.

The trip was funded and organized by League of Hope. The charity has worked in Haiti for the past 18 months. Agricultural development is critical for the country now, said Huff, who was in Haiti on the day of the earthquake.

“University of Georgia has a lot of expertise in agricultural fields, but they also have many contacts in industry in Georgia and across the United States,” Huff said. “The mission (of the team) is to see how we might employ those resources to help Haiti recover from the earthquake.”

Decades of horrendous environmental practices and policy decisions – and some tough breaks from Mother Nature – have left Haiti one of the poorest, least-developed countries in the world. Where lush tropical growth and abundant agriculture once grew, today remains barren, eroded mountains towering over poorly managed land. Sparse, rocky roads – some like parched riverbeds in the dry season – connect cities, where many live in cobbled-together shacks and poorly sanitized conditions.

Government turnovers, some violent, have come and gone. But for decades, poverty has been a constant ruler. It suppresses life there.

Statistical numbers vary, but most Haitians live on less than $2 a day. One in five children suffers severe malnutrition, but many more don’t get the proper nourishment needed for healthy immune systems. Disease is widespread. Life expectancy is just more than 50 years. Unemployment is as high as 80 percent in some areas. Haitian farmers produce only half of the food needed in the country each year.

“The people need a hand up instead of hand outs,” Suchet Loois told the team. The Haitian native and retired Tuskegee University professor now spends time in Los Palis with the Catholic-based Haiti Humanitarian Fund, working with local farmers on sustainable small-scale vegetable production and a small-business credit program for women.

Bad governmental decisions -- including abolishing the country’s Extension program several decades ago -- coupled with the exodus from rural areas to cities have been disastrous and need to be reversed. Loois figures Haitians are two generations removed from passed-down agricultural knowledge.

“More than anything, we need education and without it lives will never improve here,” Loois said, as a dozen local farmers gathered to hear him speak about the use of drip irrigation for vegetables.

The team met with U.S. Agency of International Development officials at the U.S. Embassy in Port-au-Prince to gather background information and learn more about the agency’s agriculture-related programs in Haiti. CAES has a Peanut Collaborative Research Support Program funded by USAID around Cap-Haitien on the country’s northern coast. Peanut experts help farmers in that region grow safer, better peanuts. They are partnered with Meds and Foods for Kids, which makes a peanut-based, ready-to-eat food called Medika Mamba to combat malnutrition in children.

During the week-long trip, the team traveled to the central plateau. If the country has a potential “breadbasket,” this region is it. The team toured farms there managed by Zanmi Agrikol, the agricultural arm of the Boston-based Partners in Health, which has provided extensive medical care for Haitians for 25 years.

Recently, Zanmi Agrikol started producing a peanut-based therapeutic food to distribute through nine PIH clinics across the country. The program uses Haitian-trained agronomists to grow the food. They want to use this program to teach local farmers modernized farming techniques. But they need help to do it.

Based from the trip, CAES plans to expand farming assistance into the central plateau. General concepts of proper fertilization, crop varieties and rotation, conservation, disease and insect control and good postharvest handling aren’t well understood or practiced. These are the areas where CAES experts can help the most.

“Now that the whole world has focused on Haiti, and if we coordinate our activities together, we can make a lasting impact on the lives of Haitians,” Kanemasu said.

During the trip, Kissel, the team’s soil scientist, took soil samples to determine the land’s potential for agricultural production or what could be added to it to improve it. The team also delivered 150 pounds of medical supplies and distributed 200 pounds of peanut butter donated by the U.S. peanut industry. Since the earthquake, the peanut industry has provided eight semi truckloads of peanut products worth $350,000 wholesale, said Wells, who coordinated the industry’s Haiti relief efforts. But more can be done.

“People want that connection with the earth. You feel really good about providing something that’s life sustaining, which you can produce yourself,” Wells said. “And Haitian farmers want to be able to do that. So, if we can help provide the expertise that allows them to do that, I think that’s really a great thing.”

Within the month, the team will formally submit an agricultural action plan for Haiti to CAES dean Scott Angle. The search for external funding to support it is already under way. 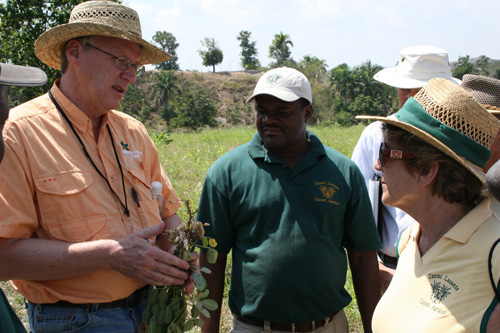 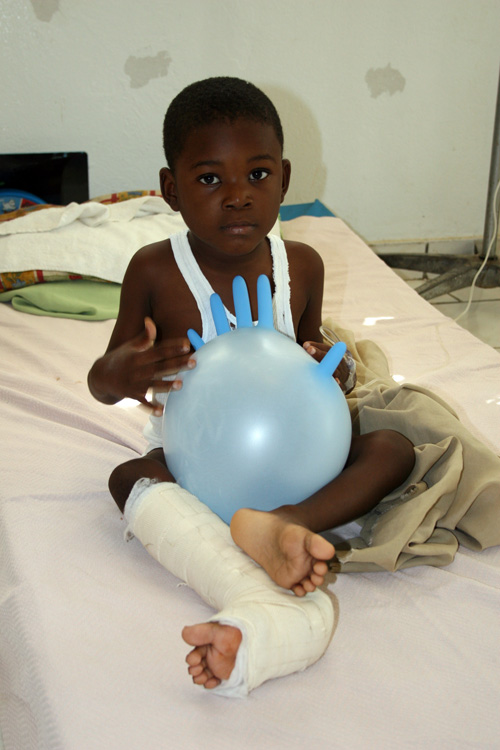