University of Georgia food scientist Yen-Con Hung has been named the first recipient of the Koehler-Ayers Professorship.

The Koehler-Ayers Professorship was recently established through a donation to the UGA Foundation from UGA food science alumnus Balasubramanian Swaminathan and his wife Mangal Swaminathan. The professorship in food science at the UGA College of Agricultural and Environmental Sciences (CAES) is named in honor of Swami’s mentors, UGA food scientists Philip Koehler and John Ayers.

The Koehler-Ayers Professorship is designated for a UGA faculty member with an outstanding record in externally funded research and/or scholarly publications who is engaged in teaching, research, public service or a combination of such duties.

“Dr. Hung is one of our top scientists in the Department of Food Science and Technology, based in Griffin,” said Allen Moore, associate dean for research at CAES. “He has a stellar international reputation and is in demand to share his expertise across the globe. The awarding of a named professorship provides recognition for his contributions and value to UGA and food safety.”

A professor in the UGA College of Agricultural and Environmental Sciences, Hung has an innovative research program in developing and applying advanced processing techniques to solve food safety and quality problems.

In 1997, he began studying the use of electrolyzed oxidizing (EO) water as a means of disinfecting without the use of harmful chemicals. He developed technology to apply EO water to ensure the safety of many food products including meat, poultry and fresh produce. This technology can also reduce bacterial contamination and disinfect food contact surfaces, a compelling contribution to the food service and food manufacturing industries.

Hung’s commitment to international outreach and collaboration has helped to build safer food systems around the world. This work earned him UGA's D.W. Brooks Award for Excellence in Global Programs in 2018 and the Bor S. Luh International Award from the Institute of Food Technologists in 2020. He received the UGA Creative Research Medallion in 2002 and the D.W. Brooks Award for Excellence in Research in 2011.

“Dr. Hung is truly a world-class scientist who has distinguished himself in research, outreach and teaching, and has been recognized by his peers,” said Rakesh Singh, head of the UGA Department of Food Science and Technology. “He is an inspiration to his graduate students, postdocs and junior faculty.”

Balasubramanian Swami began his food science career as a chemist for the Coca-Cola Company. After earning master’s and doctoral degrees in food science at CAES, he joined the faculty of the foods and nutrition department at Purdue University. He remained there for eight years until accepting a position with the Centers for Disease and Control and Prevention (CDC).

After completing 20 years with the CDC, Balasubramanian Swami retired as senior advisor for laboratory science for the Division of Bacterial and Mycotic Diseases in 2006. His wife Mangal Swami retired in 2007 after a career in health information technology at HBO and Company and later at McKesson Corporation, which acquired HBO and Company.

Since their retirement, the couple has established IHRC Inc., an organization dedicated to providing scientific program support for federal public health agencies. In 2015, IHRC established the Applied Bioinformatics Laboratory in collaboration with the Georgia Institute of Technology to provide state-of-the-art bioinformatics training and custom bioinformatic analysis support to the private and public sectors. In 2016, IHRC established IHRC Kenya to provide public health support in Kenya and other African countries.

For more information about the UGA Department of Food Science and Technology, visit foodscience.caes.uga.edu. 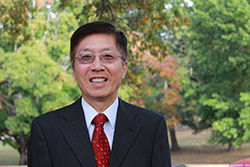 CAES News
A new method may make tomatoes safer to eat Posted on 09/08/20 by Maria M. Lameiras
When vegetable farmers harvest crops, they often rely on postharvest washing to reduce any foodborne pathogens, but a new University of Georgia study shows promise in reducing these pathogens — as well as lowering labor costs — by applying sanitizers to produce while it is still in the fields.
Subscribe for Updates