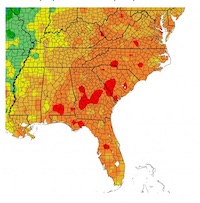 CAES News
2020 Southeastern Hay Contest winners announced Posted on 01/14/21 by Josh Paine
Despite the challenges of the pandemic, 370 entries were submitted in the 2020 Southeastern Hay Contest (SEHC), just below the record-setting number of submissions for 2019. More states submitted samples to the contest than ever before, with nine represented.
Subscribe for Updates