During her undergraduate years, Linden Pederson was dedicated to helping others appreciate the beauty of insects. She spent hours drawing insects or introducing the public to live insects as part of the University of Georgia Bug Dawgs Insect Zoo, but her senior project dwarfs those efforts.

That's because it's huge.

As her senior exit project, Pederson, who graduated from UGA in May with degrees in both entomology and scientific illustration, built a 25x scale model of a Megalodacne heros beetle.

She spent her senior year sketching each detail of Megalodacne specimens in a classroom at the Lamar Dodd School of Art.

“Joe McHugh (curator of arthropods at the Georgia Museum of Natural History) dissected the beetle for me so I could see how the different parts connected to one another,” she said. “It’s fairly large, as beetles go, but it’s still quite small, so I had to look at it under a microscope to get the details.”

Pederson then used 3D sculpting and modeling software, ZBrush, that is typically used for video game design to create every anatomically correct detail. She printed those pieces of her model using large-format 3D printers.

She had to mix both classical sculpting and illustration techniques and digital magic to achieve the level of accuracy she wanted.

“Scanning an object or specimen and then creating a model is something that is in the forefront; something that's emerging, but that's not the equipment I had access to," Pederson said. "So I said, ‘OK, I’m just going to have to do this the long way.’

“It took a long time — I spent easily more than 300 hours just digitally sculpting it.”

It then took her an additional 40 hours to assemble, paint and add the finishing touches.

“She was so observant in her studies of actual specimens that her beetle model includes minute details like individual secretory pores and patches of tiny setae (hairs) on particular segments of the mouthparts,” said Joe McHugh, who has studied this species in the past.

Pederson laughs now when she talks about wandering the aisles at Home Depot looking for the right kinds of paintbrushes to deconstruct to precisely mimic her beetle’s mouth hair, but it was important to her to get it right.

“Linden’s beetle is so good; it could be correctly identified to species and sex from halfway down the hallway,” McHugh said.

For those who want to test their insect identification skills, the model is now on display in the display case outside of the entomology department’s administrative offices.

Pederson spent her postgraduation summer completing an internship at the Smithsonian Institute in Washington, D.C. She is now pursuing her master’s degree in medical illustration at Augusta University.

Merritt Melancon is a news editor with the University of Georgia College of Agricultural and Environmental Sciences.
Authors:
Merritt Melancon
Experts/Sources:
Joe McHugh 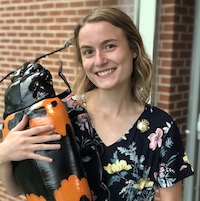