Whether they are running an independent business or working for a large corporation, pest management professionals (PMPs) know that time is money.

To help make scheduling less of an issue, a University of Georgia entomologist took his training program for PMPs and private and commercial pesticide applicators to the web. By offering a series of education courses online, including those for CEUs, Dan Suiter relieved the stress for license holders who are searching for continuing education courses, sometimes at the last minute.

In doing so, he has also opened up access to training from UGA Cooperative Extension to many more people and significantly expanded the reach of his program.

“No other state that I’m aware of does this for credit. It’s a good idea. They don’t have to leave their office or their home to get the education they need to do their jobs,” said Suiter, director of the UGA College of Agricultural and Environmental Sciences’ structural pest management extension and research program on the UGA Griffin campus. “And the instructors are all PhDs so you are getting high-caliber, research-based training.”

The webinar series has now been educating PMPs in Georgia and beyond since 2013. The technical side of things is managed by the staff in the Center for Urban Agriculture at UGA-Griffin. The webinars average about 300 participants but have attracted as many as 572. Since the program moved online, 29 webinars have been delivered to 4,700 people from 16 states and Puerto Rico, Canada, Mexico, India and Afghanistan.

“A pest control company employee can now sit in his or her office, watch a 55-minute webinar and get an hour of CEU credit,” Suiter said. “They don’t have to drive 60 miles to a class and miss a whole day of work. They can be in their truck, headed to a job 10 minutes later. And their carbon footprint is much lighter now. Individual companies have enrolled as many as 90 employees among numerous offices throughout Georgia for a single webcast.”

The programs have included speakers from UGA and other universities in Georgia, Florida, Tennessee, Kentucky, Minnesota, Ohio, North Carolina, South Carolina, New Jersey, Indiana, Virginia, Malaysia and Germany. Government agency and industry representatives who have contributed to the classes have come from the U.S. Department of Agriculture and Orkin, Rentokil, Univar and Douglas Products, as well as pest control industry consultants.

“These types of webinars are critical for our industry,” says Freeman Elliott, president of Orkin U.S. and a member of the CAES Advisory Council. “We use a blend of our own webinars we produce, as well as ones like Dan’s, for initial and ongoing training. Whether a company has two employees or 2,000 employees, they all have the need for timely knowledge that meets them where they are. Most of the employees in this industry are route-based or are sprinkled across the state, so delivering knowledge remotely is a huge avenue for learning.”

UGA Extension agents, like Wade Hutcheson in Walker County, say the webinars are useful and time-saving.

“They provide an easy way for me to engage with green industry professionals and commercial and private pesticide licensees and deliver continuing education,” he said. “The webinars are delivered by experts in the field and are full of current, practical, solid information, techniques and methods that contribute to an applicator using pesticides wisely.”

The webinars are archived and are available on demand at www.gtbop.com for those who can’t log in on the day of the session. In Georgia, clients can also go to their local UGA Extension office and earn CEUs by watching the recording of a past webinar.

“This especially comes in handy for those who realize they quickly need two hours of credit,” Suiter said. “If a county agent’s schedule allows, the agent can proctor the webinar and the state has verification that the licensee watched the webinar. The archives also can be used by county agents to build or supplement new programming. In teaching, tenure-track faculty can use the archives as fillers during absences.”

Suiter set out to reach more Georgians, but the webinar series has attracted people from across the U.S. and Mexico. CEUs for Alberta, Canada, will be added in 2019.

“We’ve even had someone log in from Afghanistan,” Suiter said. “He lives in Alabama but is working for a contractor based in Afghanistan. He still has to keep his Alabama CEUs current.” 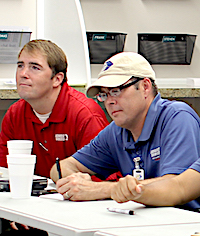