Since 1972, the University of Georgia College of Agricultural and Environmental Sciences (CAES) Alumni Association has housed the Georgia Agricultural Hall of Fame. With Georgia being home to such visionaries as Martha Berry, D.W. Brooks and Glenn Burton, the hall of fame plays an important role in telling the story of 20th- and 21st-century agriculture in the U.S.

This weekend, Georgia agricultural historymakers joined with members of the UGA CAES Alumni Association to inaugurate the newly renovated hall of fame in the Four Towers Building on UGA’s South Campus.

“Generations of farmers and agricultural advocates have built a thriving agricultural industry that continues to fuel Georgia’s growing economy and vibrant communities,” CAES Dean and Director Sam Pardue told those gathered at the ribbon cutting. “In doing so, they set an example of what researchers, farmers and citizens can do when they work toward the common good. In this day of rapid progress and change, it is more important than ever to preserve Georgia’s rich agricultural history.”

The revitalized hall of fame employs interactive digital displays that tell visitors more about each inductee and will allow the hall to grow indefinitely, explained hall of fame designer Jay Bauer, a creative design specialist with the CAES Office of Communications and Creative Services.

Bauer designed a full-wall mural that features some of the luminaries of modern Georgia agriculture. There is also a space devoted to the portraits of the current year’s hall of fame inductees. Currently, a portrait of 2018 hall of fame inductee President Jimmy Carter is hanging in that spot.

To accommodate the new technology, the CAES Office of Development and Alumni Relations re-envisioned the space, which serves double duty as a study lounge and meeting space for CAES students. Refreshed with new furniture and a new computer workstation, the space has attracted increased student use since the redesign.

“Several years ago, we realized we were running out of space to add new honorees to the previous hall of fame design,” said Van McCall, president of the CAES Alumni Association. “As part of the alumni association’s strategic plan to study and renovate the space, committees were formed, surveys were completed, and the design work began for what ultimately became the space you see today.”

A striking handmade table crafted from Georgia white oak with a Georgia pecan-wood inlay sets off the foyer of the hall of fame. Designed and built by CAES 2003 alumnus Zach Brendel, the curved table echoes the oval shape of the space and is supported by custom-fabricated steel legs. Brendel owns Oneta Woodworks, an Athens, Georgia, company specializing in sustainable art pieces made from reclaimed wood.

For more information about the hall of fame, see www.caes.uga.edu/alumni/recognitions/georgia-ag-hall-of-fame.html or visit in person at the Four Towers Building next door to the UGA Visitors Center.

The CAES Alumni Association accepts nominations for the hall of fame on an annual basis. Nominees should demonstrate impeccable character, outstanding leadership affecting Georgia agriculture, noteworthy contributions to agriculture, and accomplishments in more than one area.

The induction ceremony for the hall of fame is held annually in conjunction with the CAES Alumni Awards each fall. 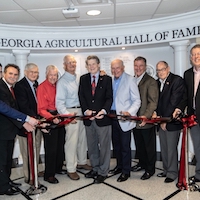 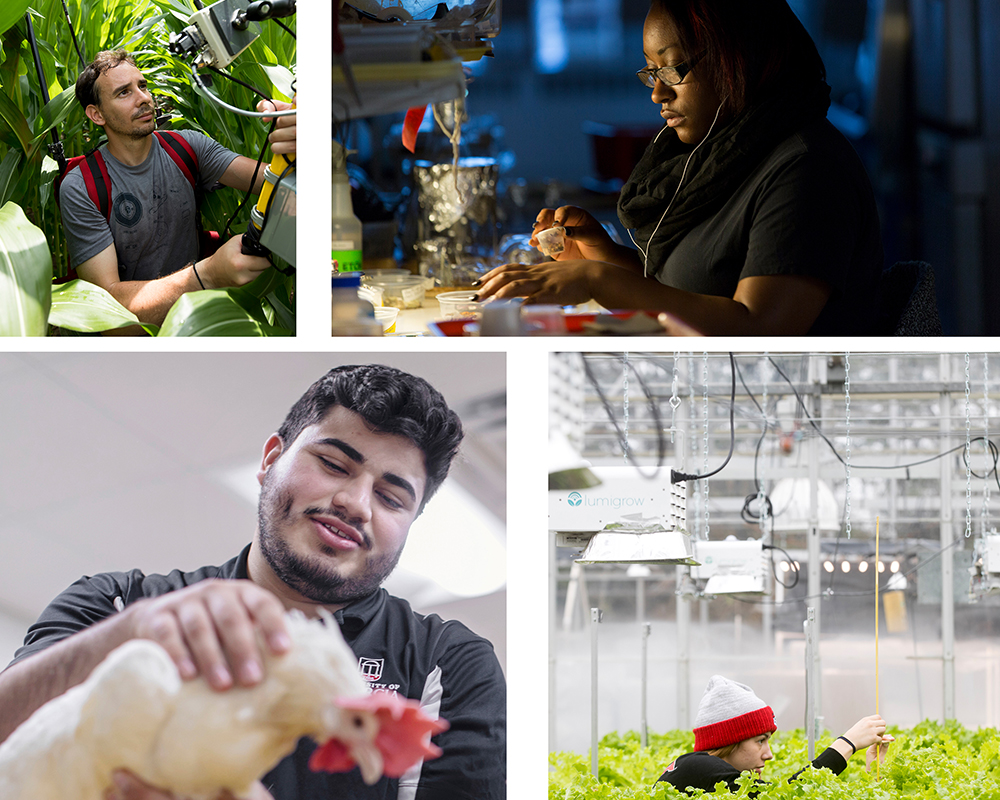