Row crop and vegetable producers usually begin planting their crops in late March through May, but excessive rainfall and cloudy conditions in January and February have left many fields soaked and soggy. El Nino, a recurring climate pattern involving changes in the temperature of waters in the central and eastern tropical Pacific Ocean, directly affects rainfall distribution in the tropics and can have a strong influence on weather across the U.S. and other parts of the world, according to the National Weather Service.

“For some, if they have fields that are prone to flooding, I think they’re going to have to consider delaying their plantings there,” Knox said.

Georgia’s peanut farmers only have to look back to last year to recall another planting season delayed by weather. Three straight weeks of rain in May 2018 forced peanut producers to wait until June to get their crop in the ground.

According to UGA Extension peanut agronomist Scott Monfort, planting season is still a month away, so there’s plenty of time left for fields to dry out.

“It is in the back of our minds that we do have a lot of work that needs to be done which should have already been done by now. But, because of rain, the farmers just haven’t been able to do it yet,” Monfort said.

“We’re in an El Nino winter, so you expect it to be wet. Even so, there are some places in the northern part of the state that are setting records for how much rain they’ve received,” Knox said.

Southwest Georgia has received its share of rain as well. During that same time frame, Tifton, Georgia, received 8.08 inches, compared to 6.77 inches last year. In Moultrie, Georgia, 9.08 inches were recorded, compared to 5.62 inches in 2018.

Rain isn’t the only weather condition affecting farmers. The threat of another late-spring freeze is also a concern for peach and blueberry farmers. Temperatures in Georgia dipped to below freezing March 6 and 7, just weeks after many peach trees and blueberry bushes started to bloom. The budding trees and bushes remain vulnerable to the freezing temperatures, which have the potential to damage a crop in its earliest stages of growth.

“I don’t think we’re out of the woods yet. I think we’re at the point where the chance of another deep freeze is going to be rarer and rarer,” Knox said. “If you look at temperatures for Alma (Georgia) and places like that, it got right around the freezing mark during those couple of days. Some fields got dinged a little, but some got in there a little above freezing.”

Here are some characteristics of an El Nino:

Clint Thompson is a news editor with the University of Georgia College of Agricultural and Environmental Sciences based in Tifton.
Authors:
Clint Thompson
Experts/Sources:
Pam Knox
Scott Monfort 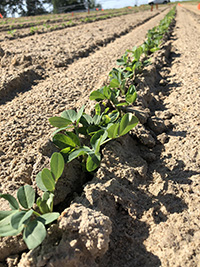