Whether it’s an argument for slow food or technologically advanced agriculture, most people oversimplify the narratives surrounding the modern food system.

The truth is somewhere in between, argued author and agriculture policy expert Robert Paarlberg during the 2018 D.W. Brooks Lecture hosted by the University of Georgia College of Agricultural and Environmental Sciences on Nov. 8 on the UGA campus in Athens.

He called for Americans to embrace a multi-agricultural mindset.

Paarlberg is an adjunct professor of public policy at the Harvard Kennedy School, a visiting professor at Harvard College and an associate at Harvard’s Weatherhead Center for International Affairs. From 1976 `until 2015, he was a professor of political science at Wellesley College.

In his three books “Food Politics: What Everyone Needs to Know,” “The United States of Excess: Gluttony and the Dark Side of American Exceptionalism” and “Starved for Science: How Biotechnology Is Being Kept Out of Africa,” Paarlberg tackles the long-term impacts of agricultural policy.

His interest in the cultural schism that surrounds food started after discussing agriculture with students far removed from farm life. They had an interest in agriculture but held overly idealized visions of farming.

In his call for multi-agriculturalism, Paarlberg is calling for advocates of both slow food and industrial agriculture to recognize the need for and value of many types of farms.

Paarlburg said the public should recognize that large farms have made great strides in ecological stewardship and still produce the vast majority of our food. They should also understand that there is still room for large-scale agriculture operations to improve.

He added that the traditional farming community should recognize that organic and locally-focused farms are vital to sustaining rural communities by supporting small businesses and adding needed populations to the landscape.

While their supporters may seem at odds with one another ideologically, large-scale, industrialized farms and small farms actually need each other to survive, Paarlburg said.

“While 87 percent of our food comes from this system (of large-scale agriculture), 85 percent of our farms don’t fall into part of that category,” he said. “Industrial farms may be commercially dominant but they’re not demographically or culturally dominant. The vast majority of our farms, and hence the vast majority of our farmers, are smaller commercial operations, part-time farms, retirement farms, hobby farms …”

Both types of operations will be needed to feed the world’s growing population and keep rural communities viable, he said.

A video recording of Paarlberg’s speech is available on the CAES YouTube channel.

In addition to Paarlberg’s talk, CAES students, faculty and staff gathered to recognize the winners of the 2018 D.W. Brooks Faculty Awards of Excellence.

For more information about this year’s lecture and awards, visit dwbrooks.caes.uga.edu. 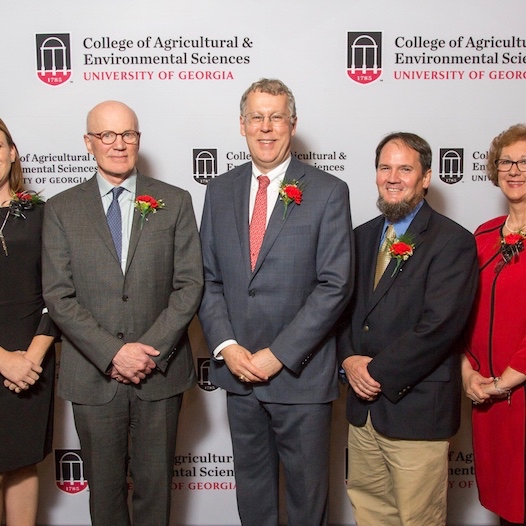 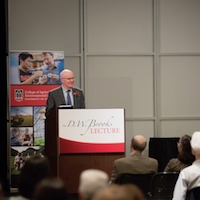